Something unusual has happened in the wake of the recent Iran nuclear talks in Istanbul: Iran hardliners have taken to the media and Friday prayers to put a positive gloss on the talks and signal interest in a compromise. Laura Rozen on reading the Tehran tea leaves. 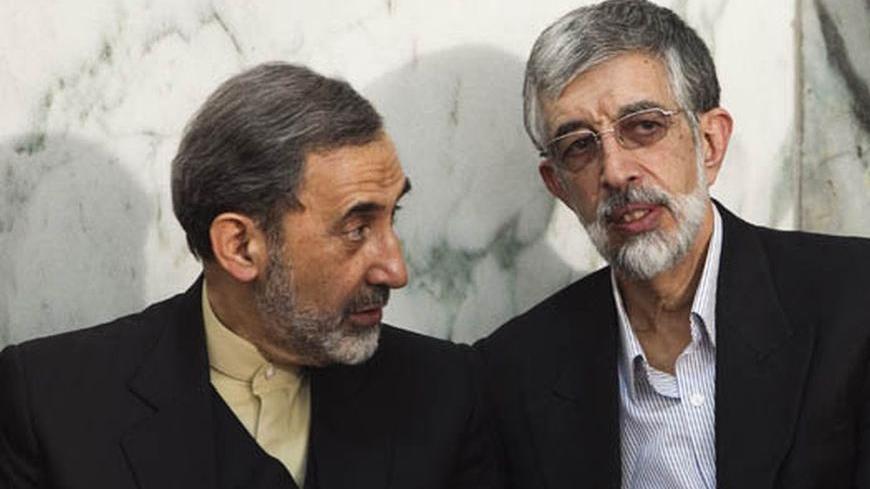 Velayati, Iran's Supreme Leader Ayatollah Khamenei's top adviser on international affairs, speaks with former Parliament Speaker Haddadadel during a meeting of Conservatives at a mosque in Tehran, ahead of parliamentary election 17/11/2011. - REUTERS/Raheb Homavandi

Something unusual has happened in the wake of the recent Iran nuclear talks in Istanbul: Iran hardliners have taken to the Iranian media and Friday prayers to put a positive gloss on the talks and signal interest in a compromise.

Key figures from the Iranian regime—including the seldom-seen top foreign policy advisor to the Supreme Leader and the head of Iran's Guardian Council—have been strikingly upbeat in public pronouncements on the April 14th talks with the six nations that make up the so-called P5+1 group—the U.S., U.K., France, Russia, China and Germany. Iran watchers say those comments from a series of regime notables seem to form something of an orchestrated campaign, and could be a sign that Tehran is interested in striking a near-term compromise over curbing aspects of its nuclear work in exchange for averting new sanctions.

"There have been some indications recently that Iran is open to compromise," Alireza Nader, an Iran analyst at the Rand Corporation, told Al-Monitor Wednesday. "It makes sense for Iran to make some sort of compromise, such as shipping out the 20 percent enriched uranium, especially if the regime can claim victory by continuing enrichment at lower levels. So there is  a slight glimmer of hope."

"I think Iran wants a deal," Hossein Shahbazi, an Iran expert and academic in Washington, DC. , told Al-Monitor in an interview, adding that he thinks the regime is taking care to try to not undermine the relatively constructive atmosphere established at the Istanbul talks.

Notable among the upbeat spin from Tehran: Ali Akbar Velayati, the éminence grise and top advisor to Iranian Supreme Leader Ayatollah Ali Khamenei, describing as a "positive step" the return to the negotiating table. “This was a positive step by the 5+1 group, and they finally returned to the negotiation table after many months and, in effect, they have reached the conclusion that the Islamic Republic will not accept the language of threats," Velayati told Iran's Central News Agency on April 17, Radio Zamaneh reported.

That was followed by Ayatollah Ahmad Jannati, the head of Iran's Guardian Council, using the occasion of Iran's Friday prayers to call the recent talks a "good achievement." The West "accepted that uranium enrichment is Iran’s right" Jannati said, Press TV reported, citing Iran's semi-official IRNA news agency. “The West must lift sanctions against the Islamic Republic of Iran so that the Iranian nation believes they do not seek to continue their enmity....If they insist on sanctions and then say they will negotiate with Iran, it is clear that such negotiations will be called off."

Iran's envoy to Moscow added more signals to the mix this week, telling Western journalists that Iran is studying a Russian compromise proposal. Under the Russian plan, Iran would reportedly freeze aspects of its nuclear program and possibly ratify a U.N. atomic energy agency protocol in exchange for a freeze in European oil sanctions set to go into effect in July. ["We need to study this proposal and to establish on what basis it has been made,” Iran’s ambassador Mahmoud-Reza Sajjadi told Bloomberg News April 23.]

The State Department, for its part, downplayed the Iranian envoy's comments, saying the venue for negotiations is not the press but the next round of nuclear talks scheduled for Baghdad May 23. "Frankly, these issues have to be negotiated at the table that we have now created and restarted with the P-5+1 process," State Department spokeswoman Victoria Nuland told journalists at the State Department Wednesday.

Iran analysts said the flurry of positive signals from Tehran is, however, striking—albeit, as always when dealing with the Islamic Republic—read with a healthy dose of caution. In the near term, "both Iran and the United States need time in order to stop a potential military confrontation, and for the Iranian regime, to stop the European oil embargo," Nader said.

Still, he cautioned, negotiating even an intermediate deal is going to involve some diplomatic heavy lifting, given the tremendous mistrust and strategic rivalry between the two sides. And he remained skeptical of the prospects for broader rapprochement anytime soon. "Getting to the initial compromise may be hard, but what comes after could prove even more difficult," he said.

Western officials, meantime, offered additional grounds for caution in reading the Tehran tea leaves, saying Iran's charm offensive may be a play to divide up the members of the P5+1 group—a familiar negotiating tactic from past Western encounters with Iran.

But other observers note that Washington has given Iran something of an opening to try to split off Russia and China from its approach. In particular, Moscow and Beijing have expressed opposition to recently passed U.S. unilateral sanctions targeting foreign entities that do transactions with Iran's Central Bank. President Obama this month exempted Europe and Japan from the sanctions—set to go into effect in June—but not P5+1 partners Moscow and Beijing. Western officials have also sought in recent days to ratchet down expectations for a near-term agreement coming out of the next round of talks in Baghdad, suggesting that even if Iran is prepared to make a compromise on its nuclear program, a deal would probably take some further talks.