Despite an upbeat tone from Iran's President Hassan Rouhani, gaps remain between Iran and the P5+1 in the expectations for Iran's enrichment capacity. 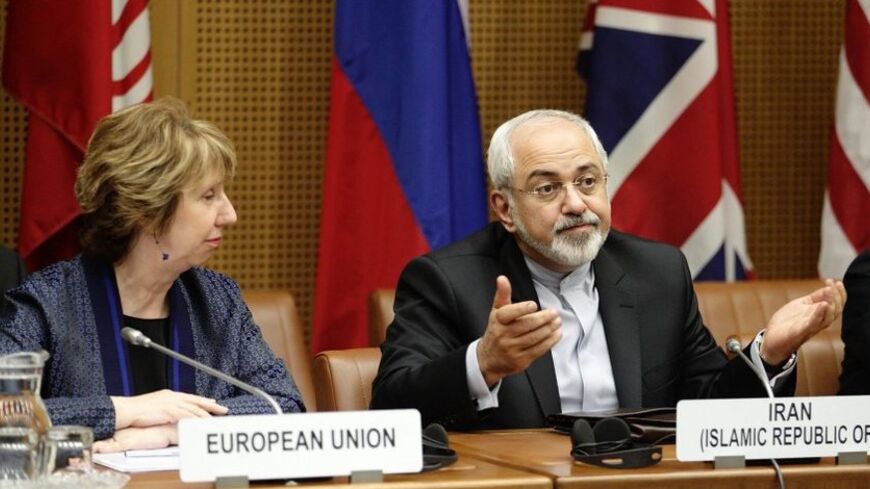 Washington, DC__ Iran’s President Hassan Rouhani on Wednesday offered upbeat reassurances about prospects for reaching a nuclear deal, even as negotiators from Iran and six world powers reported no progress from "sticker shock" nuclear talks in Vienna last week, and urged each other to return to the table next time with more "realism."

With the “positive trend of talks, we are on threshold of solving [the] nuclear issue,” Rouhani said in China Wednesday.

Despite the intentions of both sides, Iran and world powers will not be able to reach a final nuclear accord unless Iran lowers its expectations for the size of its enrichment program, non-proliferation experts in consultation with the parties warned.

“But it may not yet realize that it can’t get one unless it is prepared to lower its sights on the enrichment capacity it will be allowed to have under an agreement," Einhorn said.

"If a deal is to happen, Iran must make the strategic decision to forego a near-term breakout capability in the form of a sizable enrichment program," Jofi Joseph, a former White House Iran non-proliferation advisor, said Wednesday. "If it is prepared to do so, a deal can come together quickly this summer. If not, then an impasse will occur."

Iran was frustrated by the P5+1 proposal in Vienna for a decade or more time-frame for phased sanctions relief, and wants sanctions relief in a deal to be more front-loaded for steps it's also willing to take on the front end.

The P5+1 “say that after the agreement, we have to prove our goodwill. They will then remove sanctions one by one,” over a period of ten years, Seyed Hossein Naghavi Hosseini, spokesman for the Iranian Parliament’s National Security and Foreign Policy Committee, told Iran’s Tasnim News Agency, Al-Monitor's Iran Pulse reported Wednesday.

Iran also rejects that its ballistic missile program should be a subject for discussion with the P5+1, Iran's negotiators have repeatedly said.

The largest gap that has Iran deal watchers concerned, however, is between the expectations of Iran and the West over the size of Iran’s enrichment program.

“What matters most is whether the two sides can agree on a much more limited uranium enrichment program for near term,” Daryl Kimball, executive director of the Arms Control Association, told Al-Monitor.

“Only if Iran meets its obligations, builds confidence its program not being used for military purposes, and Iran demonstrates it has legitimate nuclear fuel needs will the international community agree to relaxing those constraints,” Kimball said.

“The brinkmanship will continue until the last minute,” one Iranian analyst, speaking not for attribution, told Al-Monitor. “My problem is the incompatibility of the two sides' end objectives...maintaining nuclear capability vs. rolling it back.”

Sources suggest the Iranians would like to initially maintain the number of centrifuges they are currently operating under the six month interim deal–about 9,000 IR-1s – to be the starting amount in the near term of a final deal, that would be allowed to increase after some duration. At the end of an as yet to be agreed period in which it would agree to restrictions and extensive inspections, monitoring and safeguards, Iran wants to have its status as a member of the nuclear Non Proliferation Treaty (NPT) normalized, so that it could in theory have no restrictions on the size of its enrichment program.

“I understand that Iran has indicated willingness to consider short term constraints on the size of its enrichment program, such as freezing at the current level of 9,000 operating IR-1s for a few years before gradually expanding to an industrial scale of 50,000 or more IR-1 centrifuge machines,” former Obama White House non-proliferation advisor Gary Samore said in a speech posted at the Harvard Belfer Center website this week.

Getting Iran to agree to restrict the size of its enrichment program in the near and medium term is probably more important than how many centrifuges it says it wants after a decade or two, some non-proliferation experts said.

“I actually think if you could get to a near term agreement, that would make us feel comfortable over the next ten years, it would take care of itself,” Greg Thielmann, a former US intelligence analyst with the Arms Control Association, said Tuesday.

Sources expect Iran Foreign Minister Mohammad Javad Zarif and European Union foreign policy chief Catherine Ashton to meet as early as this weekend to discuss how to bridge wide gaps in positions, ahead of the next round of talks in Vienna June 16th. US and Iranian sources did not immediately respond if U.S. officials would participate in the meeting or might meet separately.