In the latest salvo in final deal talks, Iran's foreign minister has posted a report arguing it would take Iran at least three years to produce enough fissile material for a nuclear weapon. 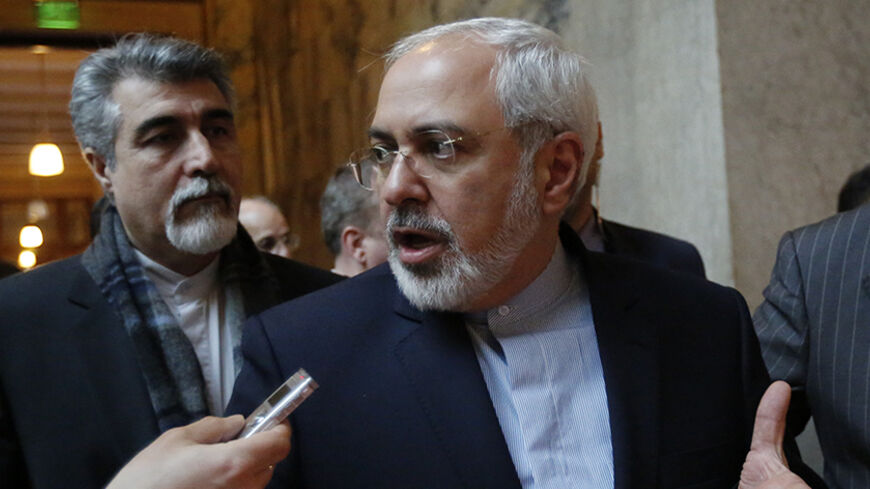 “A serious scrutiny of the myth of breakout may prevent it from derailing the nuclear negotiations,” Iran’s Foreign Minister Mohammad Javad Zarif wrote on Twitter Wednesday, posting a link to an eight-page technical report posted at the NuclearEnergy.IR website.

The Zarif tweet of the Iranian report — titled "How long would an Iranian 'breakout' really take?" — is the latest salvo in Iran's heretofore mostly behind-closed-door case to negotiators that it should be able to retain most of its enrichment capacity in a final deal and ultimately be able to expand the program to meet the country's future power needs. It comes as negotiations are intensifying to see if Iran and the P5+1 will be able to reach a final accord by July 20, when a six-month interim deal expires, or if they will need to extend the talks. The next round of final deal talks between the six powers and Iran is set to be held in Vienna next week, from June 16-20.

Iranian officials on Tuesday said differences remain after two days of talks with American diplomats in Geneva, but that the consultations were intense and useful, and will continue.

The eight-page Iranian report argues that, with its current uranium enrichment capacity of about 10,000 IR-I centrifuges, it would take Iran a minimum of three years to “break out.” The Iranian report calculates that “breakout” time would require not only producing enough weapons grade uranium for one bomb — about 12-18 months, the report says — but an additional six months to reconfigure centrifuge cascades, piping and related equipment to be able to highly enrich uranium to 90% purity, which would be detected by International Atomic Energy Agency inspectors.

"As the IAEA is present in Iran, conducting announced and unannounced inspections, and has daily access to Iran’s enrichment facilities, 'it can provide early warning to the international community at the very beginning of the reconfiguration of cascades,'" the report states.

The report also argues that it would take Iran a minimum of seven years to have a plutonium route to a bomb.

Those estimates are considerably longer than recent US estimates that Iran’s “breakout” time has been pushed back to 2 months under the six month interim deal reached last November. Negotiators from the US and P5+1 are thought to be pushing for a limited Iranian enrichment program in a final deal that would lengthen Iran’s “breakout” time to a minimum of six months to one year. Iran has reportedly argued that it would eventually need to have enough centrifuges to be able to fuel the Bushehr power reactor, which currently has a contract for Russia to provide fuel for it through 2021.

Former US arms control adviser Robert Einhorn said US negotiators are unlikely to be receptive to Iran describing concerns over Iranian breakout timelines as a “myth.”

“Since concerns about breakout are driving P5+1 insistence on a substantially reduced Iranian enrichment capability, [Iran’s foreign minister] feels the needs to turn breakout into a myth rather than a valid concern,” Einhorn, now at the Brookings Institution, told Al-Monitor Wednesday. “He will not succeed.”

"Breakout time is at best an arbitrary concept and at worst a misleading one," Ali Vaez, senior Iran analyst at the International Crisis Group, said. "It reduces a very complex process into a one-dimensional race against time.Nevertheless, it has become mainstream in Washington, mostly as a result of Iran and the majority of the expert community's radio silence on the issue. But I guess from Tehran's vantage point, it's better late than never to push back against this concept."

"Is Iran's breakout calculation infallible? Not really, but [neither] is the Western calculations," Vaez, lead author of a major recent ICG report on the Iran final nuclear deal negotiations, said. "That's why a plastic concept that is a matter of interpretation doesn’t provide a firm basis for a durable solution."

Kelsey Davenport, an analyst with the Arms Control Association, said she disagreed with some of the estimated timelines in the Iranian report.

“On the uranium route, their 'one year' assertion for producing enough [highly enriched uranium] HEU for one bomb that is used seems to be based on starting from natural uranium,” Davenport said Wednesday. “With 10,000 [separative work units] SWU and their stockpile of 3.5% enriched uranium it is considerably shorter — more like 2-3 months.”

“Also, 6 months seems far too long for cascade reconfiguration,” Davenport said. “Even if they choose to enrich to HEU using interconnected cascades, I don't think the re-design would take that long.”

But another former US official said the breakout estimates in the Iranian paper may have some merit, in that US “breakout” timelines generally are based on worst case scenarios.

“Ironically enough, the longer timelines for both HEU and plutonium production in the Iranian report may be more accurate than Western estimates,” the former US official, speaking not for attribution, told Al-Monitor Wednesday. “What everyone tends to forget is that, when U.S. government and academic experts speak on breakout time lines, they are usually describing a worst-case scenario, e.g., where Iran gets everything right the first time around, even if they are completing procedures they have never attempted before.”

“As just a cursory look at the history of Iran's nuclear program shows, if anything, it is the opposite that has happened — Iran has always encountered difficulties at every progressive step of its program and things have taken much longer than expected,” the former US official said.

However, he agreed with Einhorn that the Iranian argument against breakout concerns is unlikely to persuade Western negotiators.

“From both a substantive and a political perspective, the number of operating centrifuges under a final deal at a minimum has to be lower than the current level of 9000 IR-1 machines,” the former US administration official said. “Somewhere in the 4,000 to 7,000 range.“

“The U.S. is quite open to Iran replacing some of the IR-1s with more advanced IR-2ms, but that means Iran would have a small number of centrifuges, because the metric used would be overall SWU capacity, and one IR-2m is three to four times more powerful than an IR-1,” he added.