New lobbying disclosures raise new questions about the ties between the hawkish organization United Against Nuclear Iran to the Mujahedeen-e-Khalq. 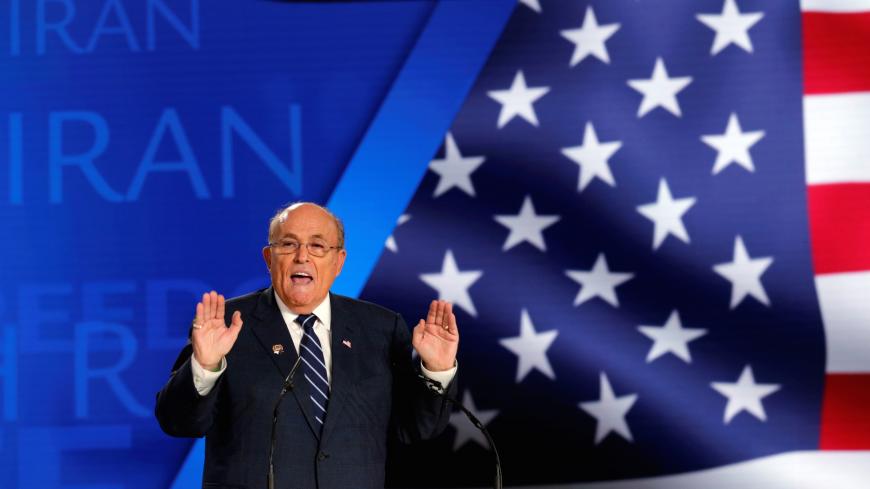 Rudy Giuliani, former Mayor of New York City, speaks at an event in Ashraf-3 camp, which is a base for the People's Mojahedin Organization of Iran (MEK) in Manza, Albania, July 13, 2019. - REUTERS/Florion Goga

The main group pushing for regime change in Iran lobbied the head of the hawkish United Against Nuclear Iran on the sidelines of his organization’s annual event in New York last fall, new lobbying filings show.

The disclosure raises new questions about ties between United Against Nuclear Iran CEO Mark Wallace and the National Council of Resistance of Iran, a Paris-based umbrella group dominated by the Mujahedeen-e-Khalq. The council also met twice with President Donald Trump’s personal lawyer Rudy Giuliani around the time of the UN General Assembly, drawing renewed attention to Giuliani’s unregistered advocacy on behalf of the group.

The council's US office disclosed meeting Sept. 23 with Wallace to discuss “developments in Iran” — the first time the group has reported meeting with the United Against Nuclear Iran CEO since registering to lobby in May 2013. The next day, Wallace hosted a gathering of Iranian opposition groups dominated by the Mujahedeen-e-Khalq, raising criticism from some Iran watchers distrustful of a group that the State Department designated a terrorist organization until 2012.

United Against Nuclear Iran sought to distance itself from the event at the time, saying Wallace had convened it in his personal capacity on the eve of the group’s official annual summit Sept. 25. Al-Monitor, however, reported at the time that the program for the event was listed as United Against Nuclear Iran, something the group said was in error.

United Against Nuclear Iran did not respond to a request for comment for this story.

The US office of the National Council of Resistance of Iran also disclosed meeting with Giuliani, the keynote speaker at Wallace’s event, to discuss “the human rights situation in Iran” and “developments in Iran” on Sept. 23 and Sept. 25. The group previously disclosed lobbying Giuliani in September 2018.

Giuliani has long been plagued by accusations that he is taking money from the Mujahedeen-e-Khalq and affiliated groups without properly registering as a foreign lobbyist. He told Bloomberg last year that he was paid by a US organization of Iranian-Americans rather than the France-based National Council of Resistance of Iran to speak at the council's rallies. Such “grasstops” lobbying of influential figures who have the ear of government officials is fairly common, legal experts say, and would only require an intermediary to register as a lobbyist if he or she is shown to be acting on behalf of a foreign principal rather than simply providing a favor.

The filing of the US office of the National Council of Resistance of Iran is also notable for revealing that Washington law firm Akin Gump Strauss Hauer & Feld is serving as legal counsel to the council's US office. In a statement to the Justice Department’s Foreign Agents Registration Act unit, the firm argues that the donors to the National Council of Resistance of Iran should be kept anonymous to avoid retaliation by Iran.

Akin Gump notably lobbies for the Public Investment Fund of Saudi Arabia and the United Arab Emirates, Iran’s biggest rivals in the Gulf. Neither Akin Gump nor the National Council of Resistance of Iran replied to a request for comment about how long the firm had represented the council as legal counsel.

Akin Gump previously lobbied on behalf of the Iranian American Community of Northern California — which has been linked to the National Council of Resistance of Iran — to get the State Department to delist the Mujahedeen-e-Khalq. The firm reported $620,000 in lobbying-related payments for those efforts in 2011 and 2012.