Ileana Ros-Lehtinen is the only ex-lawmaker currently registered as a foreign agent for the United Arab Emirates. 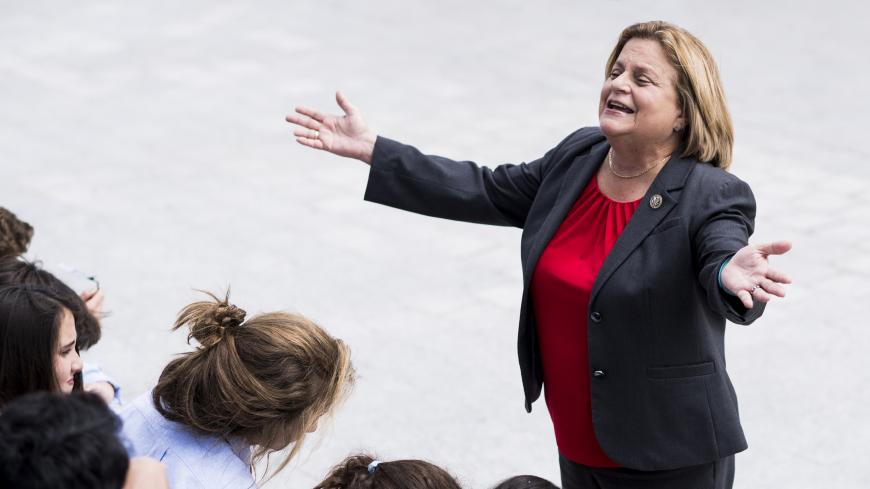 Rep. Ileana Ros-Lehtinen, R-Fla., speaks with a school group on the House steps at the Capitol after a series of votes on repealing and replacing Obamacare May 4, 2017.

Former House Foreign Affairs Committee Chairwoman Ileana Ros-Lehtinen, R-Fla., has signed on as a lobbyist for the United Arab Emirates amid intensifying pushback against the country’s growing regional ambitions.

Ros-Lehtinen registered on Jan. 21 as a foreign agent via Akin Gump Strauss Hauer and Feld, the UAE’s oldest lobby shop, soon after becoming eligible to lobby her former colleagues after Congress’ one-year cooling-off period for retired lawmakers. She served as chairwoman from 2011 to 2013. This is Ros-Lehtinen's first registration as a foreign agent.

According to her registration statement, Ros-Lehtinen will lobby US officials regarding “export controls and sanctions, trade policies, human rights, foreign and defense policies, foreign media registration and strengthening bilateral relations and regional security.” She is the only ex-lawmaker currently registered to lobby for the UAE, filling a key gap in the country’s multi-million-dollar lobbying juggernaut.

The registration comes as the United Arab Emirates has managed so far to stave off congressional restrictions on arms sales over its controversial role in the fight against the Houthi rebels in Yemen.

But the country faces other challenges with its influence campaign, including United Nations accusations that it provides military support for Libyan strongman Khalifa Hifter in violation of international law. And its efforts to get US officials to force media giant Al Jazeera to register as a foreign agent of its regional rival, Qatar, have so far failed to get much traction.

Last year, Akin Gump notably lobbied on US sanctions on Iran, the war in Yemen and arms sales, US human rights reports and the UAE and Saudi boycott of Qatar, as well as “hate speech and influence on US politics by Mideast regional media outlets, cybersecurity, and compliance with US [and] international law.” The firm, which has been lobbying for the UAE since 2007, was paid $3.6 million by the UAE Embassy in Washington in 2018, the last full year for which figures are available.

The Cuban-born Ros-Lehtinen joined Akin Gump a year ago after serving three decades in the House of Representatives, where she was widely respected as a pro-Israel hawk on Iran and Latin America but a leading Republican moderate on social policy. In July, she was retained by a Panama-based foundation in a $6 billion dispute with a member of Qatar’s royal family.

Akin Gump said it had no comment beyond the filing. Ros-Lehtinen did not respond to a request for comment.

Both Ros-Lehtinen’s successor and predecessor atop the committee also represent Middle East clients.

Former Rep. Ed Royce, R-Calif., who served as chairman from 2013 until 2019, is helping Kuwaiti private equity firm KGL Investment battle embezzlement charges against its former CEO Marsha Lazareva in his role as policy director for Brownstein Hyatt Farber Schreck. Royce has not registered as a foreign agent, however.

And former Rep. Howard Berman, D-Calif., who chaired the panel from 2008 to 2011, is a registered lobbyist for Covington & Burling. Berman notably registered to lobby for the West Bank Psagot winery battling European labeling regulations for products from Jewish settlements in the fourth quarter of 2019.

Berman also represents the European Jewish Congress, whose president Viatcheslav Moshe Kantor is fighting to get off a US Treasury Department list of alleged Russian oligarchs. He also lobbied for Egypt’s Artoc Group for Investment and Development in its dispute with Volkswagen until the contract was terminated in June.