A Kuwaiti firm and an armed Iranian opposition group are some of the latest examples of lobbyists paying for positive press coverage. 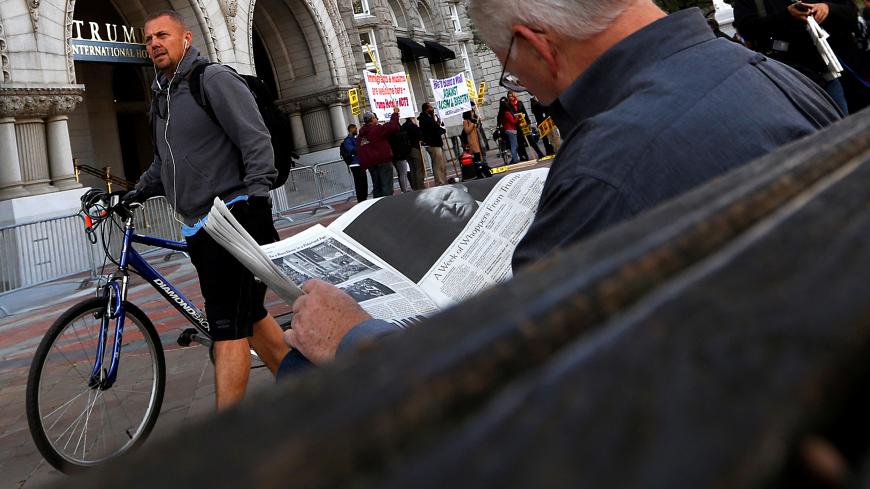 A Kuwaiti private equity firm has turned to paying op-ed writers as part of its multimillion dollar pressure campaign for the emirate to drop embezzlement charges against its former CEO.

A new lobbying disclosure from New York communications firm Marathon Strategies shows a total of $11,500 was paid for “communications” services to consulting firms JSM Consulting and Gulf State Analytics in the six months through October as part of Marathon's lobbying work for KGL Investment. During that time period, the consulting firms’ top executives wrote op-eds mirroring KGL’s claims that its Russian executive Marsha Lazareva was being unfairly hounded by a corrupt justice system — without ever revealing their financial links to Marathon or its foreign client.

The op-eds are but the latest example of an opaque practice that continues to plague US and other media despite a crackdown by US authorities worried about transparency.

For example, a lobbyist for an armed Iranian opposition group paid an online journalist $1,000 after she scored an “exclusive interview” with the group’s representative to the United States, according to lobbying disclosures for the six months through June. Komala Party of Iranian Kurdistan lobbyist AF International paid Adelle Nazarian $1,000 for “research services,” and on July 18, the right-wing Big League Politics website ran her profile of Komala’s US representative Salah Bayaziddi in which he applauds the Trump administration’s tough stance against Tehran. The story did not disclose the payment. Nazarian did not respond to a request for comment.

Ben Freeman, the director of the Foreign Influence Transparency Initiative at the Center for International Policy, called the practice “pretty pervasive.”

“Behavior like this where somebody is doing work like this — they're not registering under FARA, there's no conspicuous statement on the op-ed or on the talking points — I actually think that's more problematic than foreign agents themselves writing an op-ed,” Freeman told Al-Monitor.

He also raised the possibility that firms that fail to disclose being paid to defend a foreign agent’s interests in the media risk running afoul of the Foreign Agents Registration Act (FARA).

Josh Rosenstein, a lawyer who specializes in FARA, agreed. “If JSM and Gulf State Analytics performed those services for the benefit of KGL Investment (that is, if they were paid to write op-eds) then it’s hard to find a way that they would NOT need to be registered under FARA,” Rosenstein told Al-Monitor. “Drafting op-eds and other media statements on behalf of a foreign principal is plainly covered by the language of FARA, and simply running the work through an intermediary doesn’t get you around registration.”

Flynn “falsely represented in his FARA filings that the op-ed was written at his own initiative” and “thus again deprived the public of the very transparency FARA was designed to ensure,” prosecutor Brandon Van Grack, who is currently the head of the Justice Department’s FARA unit, wrote in a December 2018 sentencing memo.

The new Marathon filing shows it received $190,000 from KGL and in turn paid geopolitical risk consulting firm Gulf State Analytics $3,500 on May 30 and $4,000 on July 13 for “communications consulting.”

Theodore Karasik, a senior adviser to Gulf State Analytics, wrote a May 29 piece in defense of Lazareva for the open-access website International Policy Digest that Marathon lists as one of two dozen “media placements” in its lobbying filing. The piece argues that the Kuwaiti judiciary’s “hostage for ransom” case against Lazareva “threatens to harm the country’s foreign investment climate.”

Gulf State Analytics CEO Cafiero later wrote an op-ed for the same publication in mid-October bemoaning Lazareva’s sentencing to hard labor “despite the overwhelming evidence of her innocence.” The article goes on to list top former US and international officials who are advocating for Lazareva, including former FBI Director Louis Freeh, former Florida Attorney General Pam Bondi and former Veterans Affairs Secretary Jim Nicholson — without mentioning that many of them are also on KGL’s payroll (full disclosure: Cafiero is an occasional Al-Monitor contributor).

As part of a dual-track strategy of targeting both international investors as well as President Donald Trump’s conservative base, Marathon Strategies also paid Florida-based JSM Consulting $1,500 on May 27 and $4,000 on July 13. The firm is managed by Jon Seton Motley, the president of the Washington-based nonprofit Less Government, who has written multiple anti-Kuwait pieces for the conservative blog Red State.

Motley did not respond to a request for comment.

Right-wing media in particular have been targeted by Middle Eastern media influence operations.

Marathon lists multiple “media placements” with media outlets, including the Washington Examiner, the Daily Caller and Newsmax, which reported on Bondi’s advocacy for Lazareva in September without disclosing that the former Florida attorney general was a paid foreign agent for KGL via Ballard Partners at the time. Bondi has since stepped down to join Trump’s impeachment defense team.