Slovenia's prime minister and other former US officials also speak at virtual event held by Mujahedeen-e-Khalq. 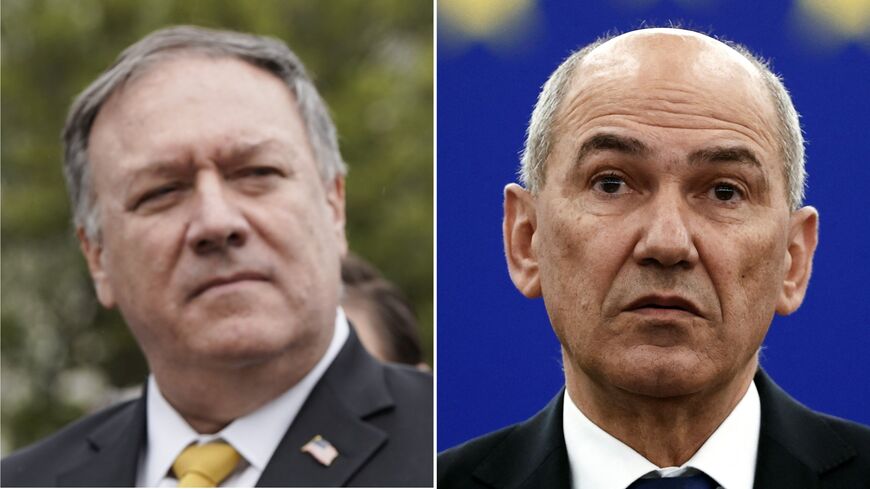 Former Secretary of State Mike Pompeo and Slovenian Prime Minister Janez Jansa both spoke virtually to the Mujahedeen-e-Khalq on July 11, 2021. Pompeo (L) is seen at an event involving the Republican Study Committee about Iran on April 21, 2021, in Washington; the group has proposed legislation that would expand sanctions on Iran and aim to prevent the United States from reentering the Iran deal. Jansa is seen speaking at the European Parliament in Strasbourg, France, on July 6, 2021. - (Photo by Joshua Roberts/Getty Images (L) / CHRISTIAN HARTMANN/POOL/AFP via Getty Images (R)

The organization's Free Iran 2021 World Summit began Sunday and concludes Tuesday. The virtual event focused on highlighting “the role the Iranian regime has played to spread chaos and destruction in the region and across the world,” according to a press release from the group.

The Mujahedeen-e-Khalq, formed in 1965 as a Marxist organization, seeks to overthrow the Islamic Republic of Iran and is outlawed by it. The organization's soldiers fought alongside Saddam Hussein during the Iran-Iraq War, which damaged their reputation among many Iranians. Some call the group a cult.

Both the United States and the European Union previously listed the Mujahedeen-e-Khalq as a terrorist organization, though both designations have been rescinded. The group has worked to rehabilitate its image in the West in recent years with some success. Some hawkish critics of the Iranian government in the United States have warmed to the organization.

Slovenian Prime Minister Janez Jansa spoke during the group's summit. The Eastern European leader called for an investigation into Iranian President-elect Ebrahim Raisi’s involvement in the 1988 killings of thousands of political dissidents in Iran.

“A United Nations Commission inquiry is of crucial importance to shed light over the horrible 1988 massacre,” said Jansa, per another Mujahedeen-e-Khalq release on the summit. “This is especially important in light of the fact that the Iranian regime’s next president will be Ebrahim Raisi who is accused by Amnesty International of crimes against humanity for his role in the massacre.”

The Socialists and Democrats group, which is a coalition of center-left members of the EU’s parliament, also criticized Jansa for speaking to the Mujahedeen-e-Khalq.

“Support for a group with such a violent, anti-democratic record, at the level of the prime minister of a country holding the rotating presidency of the EU, is extremely irresponsible and grave,” the Socialists and Democrats group said in a statement.

The parliamentarians also said that Jansa’s address to the Mujahedeen-e-Khalq undermined the EU’s efforts to revive the Iranian nuclear deal.

“It undermines the ongoing efforts of the EU and its High Representative Josep Borrell to revive the nuclear agreement with Iran, a key foreign-policy priority for the EU,” they said.

Both Republican and Democratic former US officials also spoke at the summit. Mike Pompeo, who was US secretary of state under President Donald Trump, participated for the first time.

“The regime is at its weakest point in decades,” said Pompeo, according to the Mujahedeen-e-Khalq release.

He also said, “Engagement with the regime will make lengthen the time that the regime has to behave as it has for these past decades denying basic human dignity and opportunity to the Iranian people.”

Michele Flournoy, who served as undersecretary of defense under President Barack Obama, also addressed the summit. She criticized the Iranian government for “mismanagement of the economy” as well as “political and social repression,” among other things.

Flournoy also said that in her view, the administration of US President Joe Biden is as committed to preventing a nuclear Iran as Trump was.

Pompeo’s participation in the Mujahedeen-e-Khalq summit is in line with other Trump era officials embracing the group, most notably former national security adviser John Bolton. Obama, on the other hand, was more open to engagement with the Iranian government, which makes Flournoy’s participation somewhat unique.

A spokesperson for Flournoy told the US news outlet The Daily Beast on Monday that the former official was "unaware" of the event's affiliation when she agreed to attend.

Matt Duss, who is a foreign policy adviser to independent Sen. Bernie Sanders of Vermont, criticized Flournoy for speaking at the Mujahedeen-e-Khalq event in a Sunday tweet.