Unpaid lobbying contracts can lead to lucrative connections by helping the right people get into power. 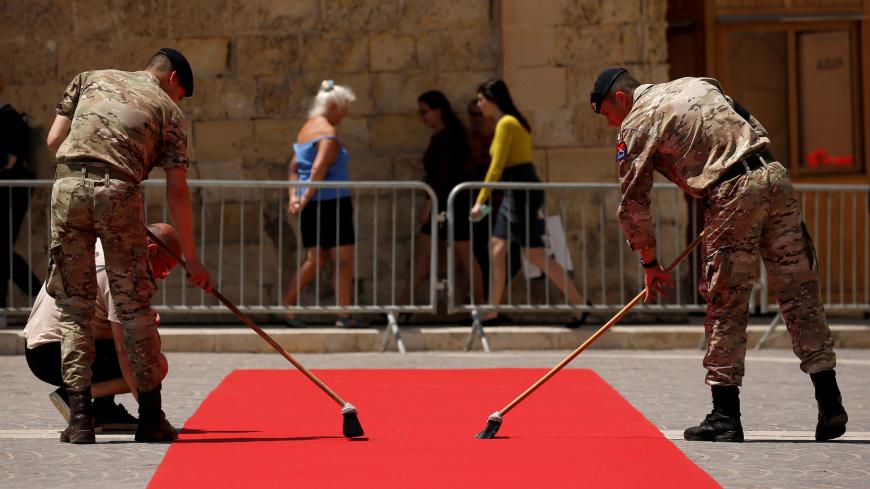 Maltese soldiers sweep the red carpet ahead of the arrival of Fayez al-Sarraj, the prime minister of the UN-backed Libyan government, in Valletta, Malta, May 27, 2019. - Reuters/Darrin Zammit Lupi

When Libyan scholar-turned-politician Aref Ali Nayed first descended on Washington five years ago to warn policymakers about what he called the “bunch of thugs” running things in Tripoli, he paid Washington lobby shop Sanitas $400,000 for two months of work.

With Nayed now openly eyeing a run for office in the oil-rich country, Sanitas in September once again signed up to work for his Libya Institute for Advanced Studies — but this time, for free.

“As Dr. Nayed’s political career has developed, we have followed along and have supported him,” Sanitas lobbyist Chris Harvin told Al-Monitor. In turn, Harvin said, Nayed is advising Harvin’s nonprofit Vanguard Africa, which lobbies for African political figures, for free.

The pro bono agreement stands out at a time when rival Libyan factions have been shelling out millions of dollars to press their claims in Washington.

With Nayed-allied strongman Khalifa Hifter pressing his attack on Tripoli, the UN-backed Government of National Accord signed lobbying deals valued at more than $3.5 million in 2019 alone. In May, Hifter’s self-proclaimed Libyan National Army hired a Texas consulting firm for $2 million.

While unusual in a Middle East lobbying industry well known for its million-dollar deals, pro bono agreements are not unheard of. An Al-Monitor review of lobbying records uncovered at least four other lobbyists and firms currently working for free for Middle Eastern clients, including another one in Libya.

For US lobbying firms, building relations with would-be leaders can deliver a hefty payday if and when grateful clients get into power. They can also foster lucrative relations with deep-pocketed supporters: Nayed, for example, served as Libyan ambassador to the United Arab Emirates after the fall of Col. Moammar Gadhafi and has close ties to the United Arab Emirates, which supports Hifter against the UN-backed government in Tripoli.

Ben Freeman, the director of the Foreign Influence Transparency Initiative at the Center for International Policy, likened the pro bono practice to trying out for a job.

“It can in some ways be like an audition for a paid position later,” he said, adding that the practice is “certainly not a new phenomenon” and comes in multiple strains — “the good, the bad and the ugly.”

US lobbying law actually bans influence firms from being paid contingent on specific successes. But lawyers say it’s fine for lobbyists to work pro bono in the hopes of getting paid down the line — as long as there’s no formal deal.

“There’s nothing that prohibits a foreign agent from working pro bono in the hopes of securing more work,” Joshua Rosenstein, a lawyer specializing in the Foreign Agents Registration Act, told Al-Monitor. But “an agent would need to be careful that there was no agreement to be paid down the line if the work was successful.”

Nayed's name has been floated for years as a contender to be Libya’s prime minister; if this happened, it would leave Sanitas in a good spot to capitalize on their relationship. In recent meetings with US officials, Nayed reportedly pitched himself as a political leader for Libya after Hifter “liberates” the capital.

Another Libya lobbyist, Charlie Black, was in Vienna when he met Libyan Deputy Prime Minister Ahmed Maiteeq for the first time in April 2019. Black’s firm, Prime Policy Group, signed a pro bono contract with Maiteeq’s chief of staff the following month and quickly reached out to “key members” of the US House and Senate foreign relations panels as well as the State Department, national security officials and private sector experts.

Maiteeq could run Libya one day, Black told Mother Jones. “He struck me as someone we ought to get around in the US,” he said.

Former US Attorney General Michael Mukasey, for example, lobbies for free for the Iranian opposition National Council of Resistance of Iran, even as the council pays former New Jersey Democratic Rep. Robert Torricelli $20,000 a month and former Undersecretary of State for Arms Control and International Security Robert Joseph $15,000 per month. Building relations with the council, however, can prove beneficial in other ways: The umbrella organization dominated by the Mujahedeen-e-Khalq has close ties to top Republicans, including President Donald Trump’s personal attorney Rudy Giuliani, and the group is known to pay handsomely for politicians who speak at its events, as Mukasey has several times.

Separately, Alabama businessman William Brooke briefly lobbied pro bono for then-Lebanese Prime Minister Saad Hariri in 2018 after visiting Lebanon on a mission trip with a church group, the Anniston Star reported. Brooke reported having “verbally communicated” with White House staff, State Department officials and members of Congress “regarding the desire of the Office of the Prime Minister of Lebanon to engage in discussions with the United States regarding Lebanese national affairs.”

Finally, since last year Maryland real estate developer Antoine Haddad has been registered as an adviser to Lebanese President Michel Aoun, helping to keep US aid flowing despite mounting concerns about Hezbollah’s influence in the country. The April 2019 contract calls for Haddad to be paid one symbolic Lebanese lira — less than one US cent — per month.