Foreign agents seeking to sway the president on behalf of both warring factions in Libya are among the cheer squad. 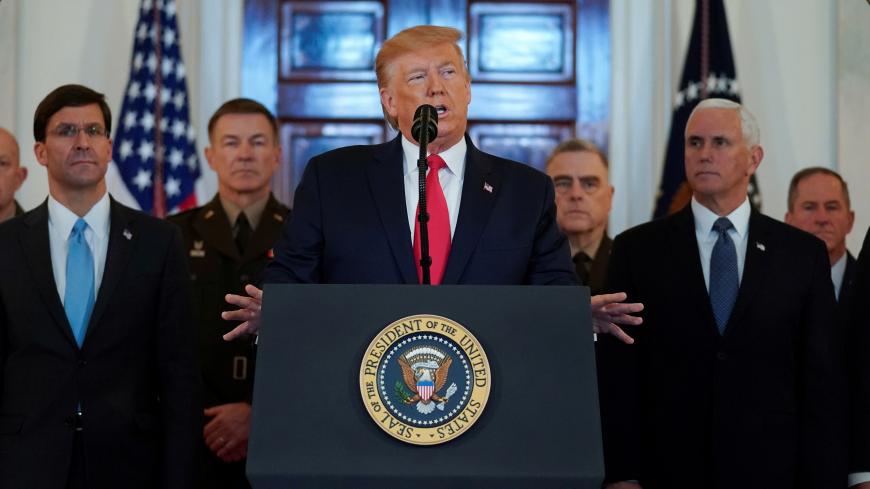 US President Donald Trump delivers a statement about Iran flanked by US Secretary of Defense Mark Esper, Vice President Mike Pence and military leaders in the Grand Foyer at the White House in Washington, DC, Jan. 8, 2020. - Reuters/Kevin Lamarque

Not to be outdone, lobbyists for the UN-backed Government of National Accord (GNA), which Hifter is trying to topple, came out with their own press release today praising the strike. They argue that just as Soleimani used foreign proxies to sow chaos across the Middle East, Hifter is doing the same in North Africa.

“The GNA is resisting Hifter‘s renegade force, which has advanced fighters from Russia, Iran’s longtime partner in undermining US interests in Iraq, Libya and elsewhere,” said Brad Gerstman, the founding partner of GNA lobby shop Gotham Government Relations. “A win for Hifter is a win for Russia and Iran, and posthumously for Soleimani,” he said, accusing Russia and Iran of seeking “permanent instability in Libya.”

In a podcast interview after her video went viral, Kasraie, a former aide to ex-Rep. Trent Franks, R-Ariz., said she was inspired to create the video “just for my friends, just in my own little network” and was surprised when it garnered millions of views on social media. She does not mention Libya or her work as a consultant for Houston-based Linden Government Solutions, which the LNA hired for $2 million in May 2019.

Gerstman, a former lobbyist for Trump in New York who helped orchestrate his presidential campaign announcement, told Al-Monitor that his press release wasn’t a “ploy” to curry favor with the Trump administration. But he acknowledged that Soleimani was “in the news” and it made sense to highlight what he said were similarities between the chaos both the Iranian general and his Libyan counterpart Hifter have unleashed.

The rival Libyan lobbyists are hardly the only ones applauding Soleimani’s death.

Meanwhile, Maryam Rajavi, the president of the Iranian opposition National Council of Resistance of Iran, which lobbies for regime change in Iran, called Soleimani’s death “an irreparable blow” to Tehran. And the leader of Citizens for a Safe and Secure America, which lobbies for a hawkish US policy against Bashar al-Assad in Syria, thanked Trump for a “great job” in a tweet.

The pro-Israel lobby AIPAC, or the American Israel Public Affairs Committee, praised Trump’s “decisive action” that “brought to justice one of the world’s most dangerous terrorists.”

And perhaps no group has been as celebratory as the Foundation for Defense of Democracies (FDD), which recently registered to lobby for the first time. Announcing his return to the organization last week, Richard Goldberg, an Iran hawk on Trump’s National Security Council, thanked Trump for his “bold and decisive leadership to keep America safe and strong” and said he was looking forward to “keep up the fight” for the president’s “maximum pressure” campaign.