The UN-backed Government of National Accord is lobbying Washington to halt Khalifa Hifter’s offensive on Tripoli by denying him arms from Gulf Arab states. 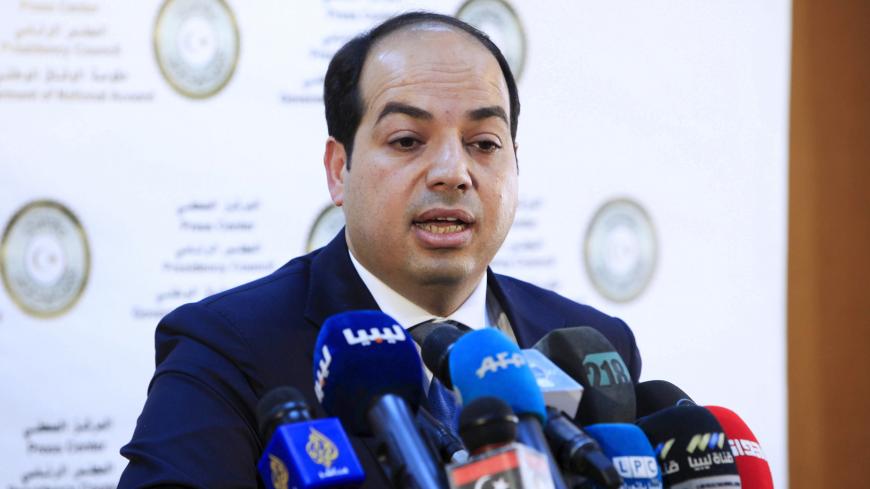 Libya's besieged UN-backed government has launched a full-fledged effort to get the Donald Trump administration to abandon strongman Khalifa Hifter and press US Arab allies to do the same.

Last week, Washington-based Prime Policy Group registered as a foreign agent for Deputy Prime Minister Ahmed Maiteeq with the goal of introducing him to Congress and the administration so he can brief them on the status of the civil war “and his government's interest in peace and unity government, which is US policy.” The new registration comes a week after the Government of National Accord signed a $2 million contract with Mercury Public Affairs.

The lobbying push follows President Donald Trump's April 19 comments during a call with Hifter that seemed to green-light his offensive on Tripoli, a reversal of previous US insistence that there was “no military solution” to the Libyan conflict.

“It does appear that they’re embarking on a fairly substantial effort,” said Andrew Miller, a National Security Council director during the Barack Obama administration. “Ideally what they would want is a fresh statement from Trump clarifying the policy.”

Ibrahim Sahad, an ally of the Government of National Accord on Libya’s consultative Higher State Council, told Al-Monitor during his visit to Washington this week that a key ask was for the United States to step in to stop the flow of arms and fighters from Arab countries such as the United Arab Emirates in a bid to slow Hifter’s momentum. The body is run by Khaled Mishri, a former Muslim Brotherhood member.

Hifter is leaning on both countries to provide intelligence and firepower, Sahad said, including drone coverage and ammunition, a possible violation of the UN-backed arms embargo in Libya.

“We can see tanks from the United Arab Emirates in the fighting. We could see the drones which have been bought by the United Arab Emirates, and the Egyptian border is open,” said Sahad, who is seeking meetings with Congress and the administration. “If the [UN] Security Council could not do it, then I think the countries that see the interest of seeing Libya as a stable country should step [in] to prevent this type of intervention.”

The UN is reportedly probing allegations that the UAE sent weapons to Hifter in violation of the international arms embargo. Neither the Emirati nor the Egyptian embassies in Washington replied to requests for comment.

Black told Al-Monitor that he'd met Maiteeq through a "mutual friend" and "offered to arrange a few meetings in Washington for him, on a volunteer basis." His firm, he added, does not "purport to speak for the GNA."

The push comes as the Tripoli-based government has sought to make inroads with influential lawmakers to get Trump’s ear. A Mercury source told Al-Monitor that the firm, which also represents Turkey and Qatar, helped set up an April 30 call between Sen. Lindsey Graham, R-S.C., a Trump ally, and Prime Minister Fayez al-Sarraj. Graham urged the Trump administration to “firmly reject any effort — by any party — for a military takeover” in a statement after their conversation.

Sahad told Al-Monitor that cutting off Arab arms to Hifter would sap his military strength and facilitate a peaceful transition. But he insisted that the strongman based in eastern Libya should have no role in the government after a weekslong offensive by his self-proclaimed Libyan National Army that the UN estimates has killed at least 432 people.

“In my opinion, Hifter [is] finished from the scene. He destroyed Benghazi and destroyed Derna [in eastern Libya]. Are we going to stand for the destruction of Tripoli?” Sahad said. “Hifter is not going to stop fighting until he becomes the sole governor of Libya.”

But Hifter still has defenders.

Egyptian President Abdel Fattah al-Sisi, Saudi Crown Prince Mohammed bin Salman and Abu Dhabi Crown Prince Mohammed bin Zayed — all Hifter allies — have all recently spoken to Trump as the Tripoli offensive raged. And Daniel Faraci, a former Hifter family lobbyist who says he remains in communication with the Libyan strongman, told Al-Monitor that the Libyan National Army is seeking “formal support” for counterterrorism operations from the Trump administration and wants to remove the US arms embargo on Libya.

Meanwhile, experts warn that Hifter doesn’t need a clean victory in the capital to boost his recognition among world leaders.

“The way he looks at it, he’s not looking at delivering a clean, robust strong performance from a military perspective,” said Jalel Harchaoui, a research fellow at the Clingendael Institute in The Hague. “All he has to do is keep there, stay there, keep driving.”

Jonathan Winer, a former US envoy to Libya, said the international community should build “consensus and pressure” for a cease-fire and respect for the UN arms embargo in order to inspire fresh negotiations after Hifter refused a deal to join forces with the Government of National Accord last month. “You can’t expect talks to take place while the city is being attacked.”

Russia has also supported Hifter by printing $13 billion in “ersatz currency,” Winer said, giving Hifter the ability to pay off his patronage networks. Now the Libyan strongman is prepared for a long fight to take control of the country’s central bank in Tripoli in an effort to consolidate his power, the former diplomat said.

“It’s not going to be over quickly because this is everything. This is winner take all,” said Winer. “They’ve run out of the ability to borrow money. There’s a cash crisis here, and that’s one of the things that drives him.”

- Aaron Schaffer contributed to this report.

Correction: May 9, 2019. This story has been updated with comment from Prime Policy Group reflecting that it represents Libyan Deputy Prime Minister Ahmed Maiteeq, not the Government of National Accord itself.