The UN-recognized Government of National Accord has signed a massive deal with Mercury Public Affairs as Khalifa Hifter’s forces threaten Tripoli. 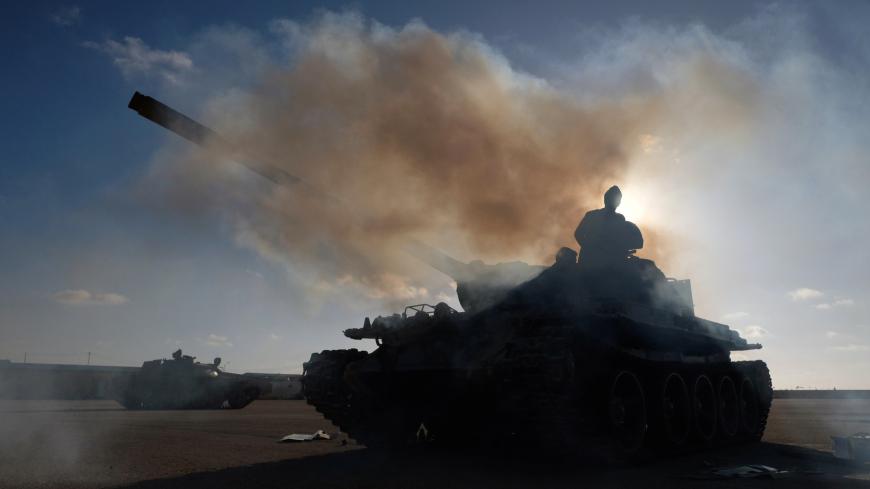 Members of the Libyan National Army get ready before heading out of Benghazi to reinforce the troops advancing to Tripoli, in Benghazi, April 13, 2019. - REUTERS/Esam Omran Al-Fetori

The UN-backed Libyan government has signed a $2 million deal with Mercury Public Affairs to lobby Congress and the Donald Trump administration just days after reports that the president backed rival Khalifa Hifter.

The Government of National Accord (GNA) signed the year-long contract on April 25, after reports that Trump had indicated support for Hifter’s march on Tripoli in a phone call with the eastern-based strongman. The contract calls for Mercury to be paid $500,000 per quarter in fees and expenses, with the first installment paid up front.

Neither Mercury nor the Libyan government answered requests for comment. But experts say the expensive contract is a sign the GNA is deeply concerned about a possible US shift away from the UN-backed peace process in favor of Hifter, a former CIA asset who leads the self-proclaimed Libyan National Army.

“This is a dramatic reversal of how the international landscape has changed around the GNA,” said Jalel Harchaoui, a research fellow at the Clingendael Institute in The Hague. “They are basically seeing the writing on the wall.”

The leaders of the United Arab Emirates and Egypt, two of Hifter’s top backers, spoke with Trump shortly before his call with Hifter. Top US officials, including Acting Defense Secretary Patrick Shanahan and Secretary of State Mike Pompeo, had previously demanded that the Libyan strongman halt his advance, which the UN says has already killed at least 345 people and displaced thousands.

The GNA is likely to get a receptive ear on Capitol Hill, where lawmakers of both parties have raised concerns about Hifter’s advance. Shortly after Sen. Lindsey Graham, R-S.C., spoke to Libyan Prime Minister Fayez al-Sarraj by phone on Tuesday, the Trump ally urged the administration to recommit to the peace process.

“We need to reinforce the message that we’re not picking one group over the others and we reject military force as the solution to the problems in Libya,” Graham told Politico on Tuesday.

In an interview with Al-Monitor on Monday, Rep. Tom Malinowski, D-N.J., a former assistant secretary of state under President Barack Obama, called the US shift in favor of Hifter “batshit crazy.”

“I’m hoping that in the Libya case we can pull them back from what I think would be a historically bad decision aligning with a Russian-backed warlord who is hated by the majority of the Libyan people to help him overthrow the legitimate government that the United States and the international community supported," Malinowski said.

Washington lobbying firms have courted the Libyan government since shortly after its formation in 2016. Mercury also lobbies for Qatar and Turkey, both of which support the GNA against Hifter. The GNA hasn’t had a Washington lobbying presence since its Foreign Ministry terminated its contract with the Alexandria Group in October 2016.

A former senior US official involved in Libya told Al-Monitor that Mercury first approached the GNA as a potential client at the time, including Wafa Bughaighis, now the country’s ambassador to Washington. But the nascent Libyan authority rebuffed the firm, citing high costs, as Sarraj mulled appointing a special envoy to the United States.

“The Libyans always wait until they're forced into a panic zone and then they look for alliances,” the former official said. “Mercury was on their radar, and when this happened they realized they needed some avenues to get to people.”

At recent preparatory talks in the UAE, Hifter was offered a “very generous” deal to join forces with the GNA, the former official added. “Sarraj would be hands off in terms of military operations in Hifter's role in command of the armed forces. [The goal] was to get Hifter to agree to acknowledge having civilian oversight of some sort.”

Former US envoy to Libya Jonathan Winer told Al-Monitor last month that Hifter had rejected a similar deal for military control in 2016.

The GNA’s entry into the Washington lobbying scene comes just after Libyan oil tycoon Hassan Tatanaki, who has links to both the Gadhafi family and Hifter, signed a $30,000 monthly contract with Yorktown Solutions in an effort to get the Trump administration on board with a push for fresh elections. Tatanaki has called for Libya, one of Africa’s largest oil producers, to shut off the pipelines as the conflict rages. Two former US officials said Tatanaki has made a similar push in the past.

“Oil should be stopped, that is my emotional opinion,” Tatanaki told Al-Monitor last month. “It is the thing that seems to be the one that hits the alarms. The human factor has not hit the alarms. It is a wake-up call.”