Congress moves to sanction Russians for mercenary surge in Libya

The US National Security Council has begun a review of US policy involving Libya as a congressional bill seeks to sanction Russian mercenaries who have undertaken operations in the war-torn North African country. 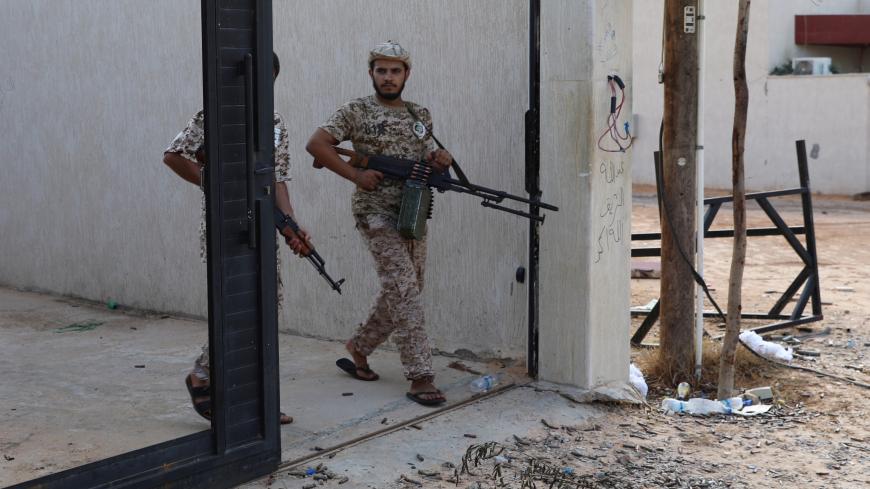 Congress is preparing bipartisan sanctions on Russian mercenaries and other suspected human rights violators in Libya, Al-Monitor has learned, as the Donald Trump administration looks to use the recent entry of Moscow-linked paramilitaries into the conflict to reinvigorate a long-dormant American strategy in the war-torn country.

Sens. Marco Rubio, R-Fla., and Chris Murphy. D-Conn., are also expected to sign onto the legislation, sources familiar with the bill say. The legislation also would require the United States to work with humanitarian organizations to ensure that aid be delivered in the country. “We just wanted Congress to weigh in and give a carrot-and-stick approach,” a House aide told Al-Monitor.

The proposed sanctions come amid reports that Russia has begun to add mercenaries to the front lines of the conflict to support eastern Libya warlord Khalifa Hifter’s stalled offensive to take Tripoli; the help reportedly includes snipers, Sukhoi jets and precision-guided artillery. Around 200 Russians who have entered the conflict in recent weeks likely belong to the Wagner Group, a private military contracting firm with links to the Kremlin; some believe the move is linked to corralling the country’s oil supplies.

“Russia is very interested in oil reserves, it is very interested in restoring previous contracts, it will be interested in supporting the side that can deliver that,” said Nikolay Kozhanov of St. Petersburg, Russia, who is a senior research fellow at the Moscow-based Institute of World Economy and International Relations. “It maintains good contacts with this camp and that camp trying to decide where the situation is going.”

In a statement provided to Congress earlier this year, former US Africa Command chief Gen. Thomas Waldhauser said Russia’s strategy involved invoking Moammar Ghadafi-era ‘‘relationships and debts to obtain economic and military contracts” to access Libyan oil and ramp up arms sales as it seeks to monitor NATO countries and isolate Europe from Africa through greater control of the Mediterranean.

Nathan Vest, a research assistant and Middle East specialist at the RAND Corporation, said major ports in Libya remain under the control of militias aligned with the UN-backed Government of National Accord, limiting Russia’s ability to exert pressure on Europe by controlling migration flows.

Despite Russia’s military intervention, a former senior official said the US government still made an assessment recently that Hifter still had acute military limitations. Experts say Russia’s renewed interest in Libya could backfire by drawing the United States deeper into the conflict by consolidating American strategy around the entry of Moscow-linked proxies.

“I think their presence has certainly had a strategic effect and possibly to Hifter's detriment,” said Vest. “The acute focus over the past week or so on Russian activities in Libya has reenergized interagency conversations and likely promoted the Libya file from a back-burner issue to one receiving more attention.”

In a meeting with Libya’s foreign and interior ministers in Washington on Thursday, the Trump administration “underscored support for Libya’s sovereignty and territorial integrity in the face of Russia’s attempts to exploit the conflict against the will of the Libyan people,” the State Department said in a statement.

Coons’ legislation — which follows a companion bill in the House spearheaded by Rep. Ted Deutch, D-Fla. — could provide another kick-start for long-stalled US policy.

It would give the State Department $23 million to spend on Libyan civil society and future elections over the next four years, as the United Nations looks to a renewed effort to unify the country with a conference in Germany. The conference had been originally scheduled for October but then was postponed. The bill also would require Trump to appoint a new special envoy for Libya, a position that has been vacant since the end of the Barack Obama administration.

Meanwhile, the National Security Council has begun a review of Trump’s policy toward Libya, four sources familiar with the matter tell Al-Monitor, a move that comes as the US administration has appeared to moderate warming ties with Hifter after the department of John Bolton as national security adviser. Bolton was seen as a proponent of the eastern warlord.

In July, Victoria Coates was elevated from the NSC post of Middle East director to deputy national security adviser for that region and North Africa, moving the Libya team back from the Africa directorate after the departure of Cyril Sartor, who had been detailed from the CIA. In September, Lauren Barr joined the NSC as North Africa director from the State Department’s policy planning shop, a role she is splitting with Jake Kramer, a former Defense Department official.

Former officials said Barr — who once worked in the State Department’s Bureau of Conflict and Stabilization Operations — is seen as more likely to moderate American policy that had appeared to shift toward Hifter, once cultivated by the CIA, under Bolton. “A lot of recent hires to NSC have raised eyebrows,” said one former official. “She wouldn’t be one.”

A source familiar with the review said that NSC staffers were still in the process of reviewing prior strategies but that new director Robert O’Brien’s planned staff reductions would not impact the move. NSC officials are “still figuring out how they’re going to work the portfolio,” the source said, as Barr and Kramer divvy up Algeria, Morocco, Libya, and Tunisia, while still trying to manage each country jointly.

It’s not clear that the efforts to review the White House’s Libya policy have buy-in from Trump, who has previously insisted that the United States had “no role” in the war-torn country. Former officials say Trump and other top national security officials, such as Secretary of State Mike Pompeo, must provide some input into the review for it to yield any specific changes.

“It’s one thing for the NSC to provide some interagency policy review with different options about reengaging on a political level,” said Ben Fishman, a former NSC director for Libya during the Barack Obama administration. “It’s not useful to these things unless there are going to be some concrete results.”

The review has also coincided with the US administration getting more engaged in Libya at the working level in recent months. During a visit to Washington in September, Mustafa Senallah, the head of Libya’s largest oil company affiliated with the Government of National Accord, held meetings with Energy Secretary Rick Perry and was later greeted by David Schenker, the State Department’s top Middle East policy official, in Tunis.

Meanwhile, the Pentagon has begun targeting terror groups in Libya again after a detachment of US Marines evacuated the country amid Hifter’s offensive in April. Starting Sept. 19, the US military launched four drone strikes in southern Libya, killing a number of Islamic State fighters.

Lobbyists for the Government of National Accord (GNA) believe that Prime Minister Fayez al-Sarraj could have a larger window to garner support from the United States following Bolton’s departure from the administration.

“I can sense a scenario where the US government makes a larger commitment to the GNA,” said Bradley Gerstman, the head of the New York-based Gotham Government Relations and Communications who once consulted on Trump’s 2016 campaign rollout. “I think we’re a very long way from that April phone call with Hifter,” he said. Gotham was hired by the Government of National Accord to lobby the executive branch with a one-year, $1.5 million contract last month.

But the UN-led peace process in Libya has stalled, with the Berlin conference postponed indefinitely. A European official told Al-Monitor on condition of anonymity that the situation was reaching a “stalemate,” adding that the French and Italians — the two major Western players in the talks — need to reach consensus on a deal to present to Sarraj and Hifter before deciding the leadership of a new government.

The official described the Government of National Accord as much more unified since Hifter’s offensive began in April. Yet despite the renewed lobbying push that includes a $2.5 million contract inked with Mercury Public Affairs in May, the Tripoli government has faced challenges in getting its message in front of Congress and the Trump administration.

The House Foreign Affairs panel did not meet with Sarraj during his visit to Washington in September, despite a request, though the Libyan leader met with David Hale, the State Department’s No. 3 official, on the sidelines of the UN General Assembly session.

Sarraj also took a turn speaking alongside Ivanka Trump at a sponsored event in New York during the world body’s annual session, as the Government of National Accord signed a deal with General Electric to resolve longstanding blackouts in Tripoli; however, the US multinational has reportedly been frustrated with the government’s intransigence.

Experts told Al-Monitor that it is not clear whether Sarraj’s efforts to engage the Trump administration have been successful.

“This indicates to me that he’s been desperate to speak with US officials,” said Jalel Harchaoui, a research fellow at the Clingendael Institute in The Hague. “It might seem that nobody who’s part of the Trump administration actually wants to sit down with Sarraj.”