The United States has long struggled with how to handle Khalifa Hifter, as the former CIA asset has repeatedly threatened to march on the war-torn country’s capital. 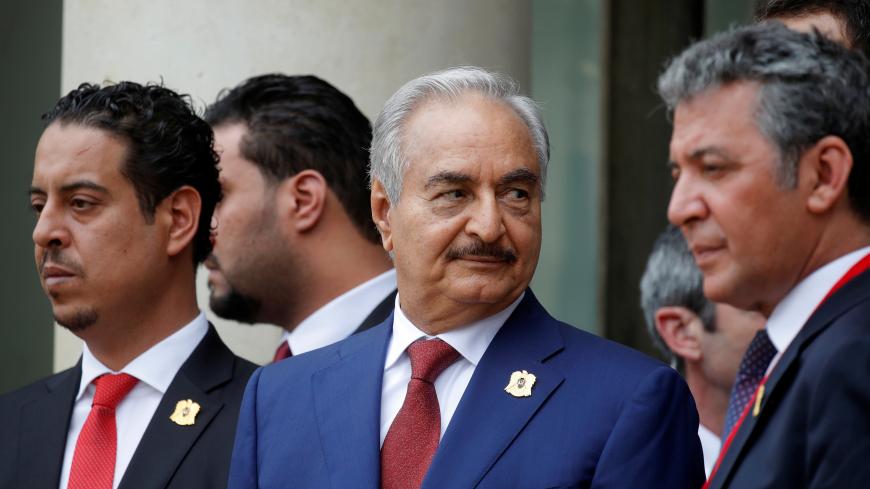 Khalifa Hifter (C), the military commander who dominates eastern Libya, leaves after an international conference on Libya at the Elysee Palace in Paris, France, May 29, 2018. - REUTERS/Philippe Wojazer

The United Nations has postponed next week’s national reconciliation summit on Libya, throwing into confusion the Donald Trump administration’s hopes of reunifying the war-torn nation at the ballot box as erstwhile US ally Khalifa Hifter marches toward the capital.

UN envoy to Libya Ghassan Salame declared today that the world body “cannot ask people to take part in the conference during gunfire and airstrikes.” With the US-backed UN process in disarray, former US officials tell Al-Monitor the United States is becoming more open to Hifter commanding a unified Libyan military as a means of stopping his offensive, which has already left 47 dead according to the UN.

“The US doesn’t want Hifter to continue with this campaign,” a former US official told Al-Monitor. “I think they’d like to see him in a powerful position within the security apparatus of a unified Libyan state, but they want him to be incorporated into the state via a political solution to the conflict.”

On Sunday, the Pentagon removed a small detachment of US troops from Tripoli amid concerns over their safety, but the United States retains a presence in the eastern city of Misrata to combat the Islamic State. Just hours later, Hifter’s forces carried out an airstrike on Tripoli’s last functioning airport.

Meanwhile, there is still no timeline for a Senate confirmation hearing for Richard Norland, the Trump administration’s nominee to be US ambassador to Libya. The White House has yet to file the career diplomat’s background paperwork to the Senate Foreign Relations committee, an aide said (former Ambassador Peter Bodde has acted as charge d’affaires ad interim, based in Tunis, since late 2017).

The United States has not emphasized Libya in its policy statements. Libya received just one mention in national security adviser John Bolton’s speech unveiling a new strategy for Africa in December. One official who left the National Security Council in 2017 said there was “not a solid” US policy for Libya.

Despite the United States signing on to a five-country statement rebuking Hifter’s advance on Monday, experts say Washington realizes the military map may be changing faster than the administration can draw up a policy response. Alice Hunt Friend, a former Pentagon official who’s now a senior fellow at the Center for Strategic and International Studies, said the United States has displayed a “real pragmatism” about “tolerating” Hifter.

The United States “hasn’t been particularly verbal about discouraging Hifter from being a major player on the scene,” she said. “The Trump administration has not really leaned into any particular policy where Libya is concerned.”

That pragmatism has been evident dating back to the Barack Obama administration, as the United States debated a potential role for Hifter in a future Libyan state, former US officials tell Al-Monitor. As the international community sought to build up the Tripoli-based government’s military capabilities after the fall of Moammar Gadhafi in 2014, then-US Africa Command chief Gen. David Rodriguez wanted to pair Hifter’s eastern troops with Prime Minister Fayez al-Sarraj’s forces in the west to battle the Islamic State.

“We wanted to combine those [forces] under Hifter and have a Libyan-led offensive against [the Islamic State] with our support,” said Donald Bolduc, the former commander of US Special Forces in Africa. “[If we had been] successful with that, then you put Hifter in charge, and then you build a national military.”

But Hifter balked at State Department-led efforts to rein in his authority. After Rodriguez retired in the summer of 2016, special envoy for Libya Jonathan Winer held two all-day meetings with Hifter in an effort to bring him under the authority of Sarraj’s UN-backed government. Hifter could have potentially been the head of Libya’s national military council or run for political office under the deal being contemplated.

“He would not do that,” said Winer, who stepped down in January 2017 and was never replaced. “The gist of it was all of Libya’s politicians are worthless, there should be no Libyan politicians, the country needed to be run by military rule, and when the country was ready for democracy he’d go back to the barracks. He had to be commander in chief, with no constraints on him.”

The talks collapsed after Donald Trump won the 2016 election, after which Hifter’s advisers pledged to take Tripoli by Christmas. However, extensive US military engagement has continued in eastern Libya, including C-17 cargo flights to Misrata detailed by the UN’s panel of experts.

Successive US government failures to reach an interagency agreement on a Libya policy to deal with Hifter has allowed France to fill the vacuum, starting with President Emmanuel Macron’s decision to invite the warlord and UN-backed President Sarraj to Paris last year. Some experts say Macron’s decision to put his weight behind Hifter made it more difficult for the international community to criticize the warlord, even as he repeatedly threatened to march on Tripoli over the past several years.

“When he did attack, people didn’t realize he was meaning those words literally,” said Jalel Harchaoui, a research fellow at the Clingendael Institute in The Hague. “Now we’re in a different universe where all bets are off.”