US assistance from an Obama-era program remains shut down amid an uncertain security situation in the North African country. 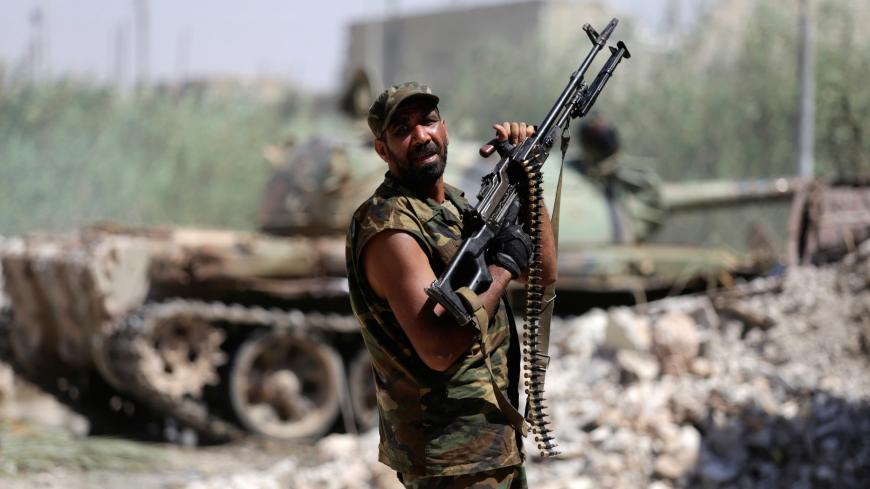 A member of the Libyan army's special forces holds his weapon during clashes with Islamist militants in the militants' last stronghold in Benghazi, Libya, July 17, 2017. - REUTERS/Esam Omran Al-Fetori

Guns and bullets to train two companies of Libyan soldiers are gathering dust in a German warehouse as the Donald Trump administration holds off on delivering the weapons to the violence-plagued North African country.

The Defense and State departments previously authorized some $23 million to train and equip Libyan special operations forces and secure the country’s vast borders, under a 6-year-old plan to carry out security and counterterrorism training and rule of law programs in a handful of vulnerable countries. Expenditures under the Barack Obama-era Global Security Contingency Fund, however, have been frozen since mid-2016, according to congressional notifications reviewed by Al-Monitor, with just $220,000 out of $15 million in border security funding obligated.

“Due to Libya’s evolving political and security landscape, this project remains on hold,” according to the Global Security Contingency Fund’s annual report to Congress.

The report say the United States moved equipment and training ammunition for the special forces program from Morocco back to Germany, home of US Africa Command, in August 2016. The fund was renewed in this year’s defense authorization bill through September 2019, but expenditures for Libya remain in limbo. A State Department official told Al-Monitor that the equipment “remains in storage” and that the United States is legally prohibited from moving forward with the border security project “until we can implement as notified” to Congress.

Overall, Libya has received nearly $130 million in US security assistance since the 2011 overthrow of the Moammar Gadhafi regime, according to data compiled by the nonprofit Security Assistance Monitor in Washington. But military officials acknowledge that the ongoing civil war has left the weak UN-backed government of Prime Minister Fayez al-Sarraj unable to unify police and military forces, complicating America’s ability to provide assistance and throwing presidential and legislative elections later this year into doubt.

“It's very difficult to characterize Libya, but I'd have to say [it’s] a fragile state,” the commander of the US Africa Command, Gen. Thomas Waldhauser, told a Senate hearing last month. He said UN plans for presidential and legislative elections later this year “wouldn’t serve any purpose” unless “the security is there.”

The European Union, meanwhile, recently renewed its mandate for a $21 million effort to secure Libya’s borders.

US Libya policy under Trump appears focused almost exclusively on trying to expel the Islamic State (IS) from the country, with The New York Times reporting last month that the Pentagon had launched more drone strikes than it has publicly acknowledged.

It’s unclear if reconciliation between Hifter and Sarraj can achieve a political settlement and whether they have enough influence to establish order. A spokesman for Hifter recently told Al-Monitor that the Egypt-led process produced an agreement in December to reunify and restructure Libya’s military, but talks stalled over determining a commander.

Even the more limited counterterrorism policy, former US officials say, has been hampered by a thinning of the State Department’s diplomatic ranks. Since the 2012 attacks on the US compound in Benghazi, Washington has left only a residual American presence across the border in Tunis.

“There’s nothing wrong with the policy, they’re just not very energetic about it,” said Jonathan Winer, the State Department’s special envoy to Libya under Obama. “There’s no special envoy; there’s no ambassador.”

The Trump administration has appeared to nominally get behind the UN-backed effort to push for elections. After Trump met with Sarraj at the White House in November, then-US Ambassador to Libya Peter Bodde and Waldhauser headlined the first high-ranking US delegation to travel to the war-torn country since 2014.

“Implementing security assistance in Libya generally has been extremely difficult,” said former State Department Libya desk officer Lydia Sizer, “due to limited US contacts there after we evacuated our embassy in 2014.”