Democrats are wary that the Donald Trump administration may be too friendly with Libya’s Khalifa Hifter, so they’re calling for sanctions. 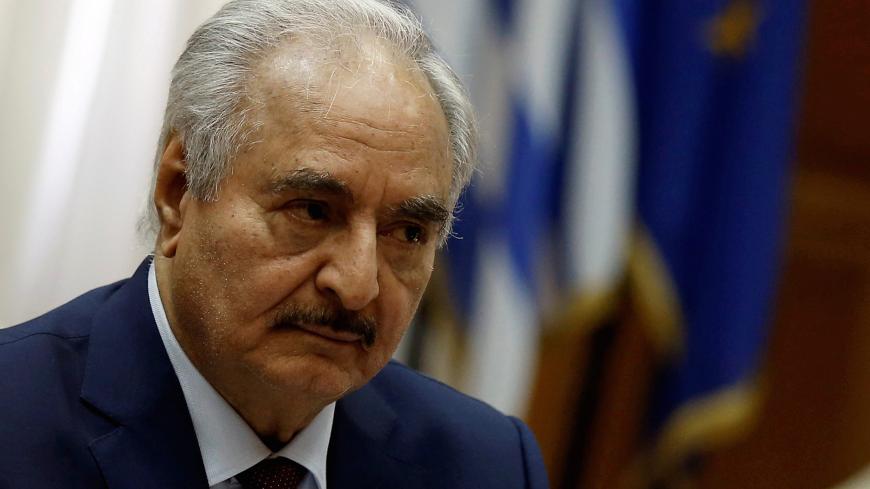 Democrats are calling for sanctions on Libyan warlord Khalifa Hifter amid concerns that the Donald Trump administration has been too soft on him as he continues his monthslong assault on Tripoli.

Sen. Chris Murphy, D-Conn., called on the Trump administration to sanction Hifter under a 2017 Russia sanctions law due to the support his militias receive from the Wagner Group, a mercenary firm with strong ties to the Kremlin.

The Wagner Group has been designated under the Countering America’s Adversaries Through Sanctions Act (CAATSA) “and they’re clearly in business with Hifter,” Murphy told Assistant Secretary of State for Near Eastern Affairs David Schenker at a Senate hearing on Libya today.

Murphy also sent a letter to Secretary of State Mike Pompeo today asking for a “comprehensive summary” of US efforts to counter Russian influence in Libya and a “detailed analysis” of the relationship between Hifter and the Wagner Group. The letter also inquires as to whether that relationship could trigger mandatory sanctions under CAATSA, “which mandates secondary sanctions on those who conduct significant transactions with the Russian defense and intelligence sectors.”

Schenker refused to discuss whether the Trump administration is considering sanctioning Hifter, noting that he’s participating in United Nations-sponsored talks to resolve the Libya conflict.

“We want to encourage this, and we’re hoping that he goes to the next step in these talks,” said Schenker.

His response drew a testy response from the top Democrat on the Foreign Relations Committee, Sen. Bob Menendez, D-N.J. Menendez threatened to start holding up Trump’s nominations on the committee unless the State Department started implementing mandatory CAATSA sanctions.

“As one of the authors of CAATSA, it is not voluntary,” Menendez told Schenker. “It is not discretionary. It is mandatory. I think the administration thinks it can ignore Congress with impunity, violate the congressional — not only — intent, but also the actual wording of the law.”

Kaine called on the Trump administration to send an “unequivocally loud and clear” message that the United States supports Libya’s UN-recognized Government of National Accord based in Tripoli.

Congress’ increased scrutiny of the Wagner Group’s role in the Libya war comes as the Government of National Accord steps up its lobbying efforts on Capitol Hill. The Government of National Accord’s public relations firm Mercury Public Affairs launched a full-court press in Washington last month to justify its defense pact with Turkey against Hifter.

Mercury Public Affairs has aggressively spotlighted Hifter’s ties to the Wagner Group and Russia, highlighting legislation that instructs the director of national intelligence to report on the mercenary group’s role in Libya, Syria and elsewhere. Sen. Lindsey Graham, R-S.C., has included the Wagner Group language in a new Russia sanctions bill, which the Foreign Relations Committee advanced 17-5 in December.

Ironically, the Democrats’ push to sanction Hifter under CAATSA also highlights lawmakers’ bipartisan frustration with Trump for refusing to implement the same penalties on Turkey, which has dispatched troops alongside its Syrian proxies to bolster Tripoli against the Libyan warlord and the Wagner Group.

Despite pressure from Republicans, Trump has so far refused to implement the legally mandated CAATSA sanctions on Turkey for purchasing the Russian S-400 missile defense system. While the State Department had previously threatened to sanction Turkey if it made the S-400 system “operational,” Pompeo moved the goal posts farther back to “full operationalization” after Ankara tested the system’s powerful radar on US-made aircraft last year.

Menendez also pushed Treasury Secretary Steve Mnuchin on whether he would implement sanctions despite political pressure from the White House today during a Senate Finance Committee hearing.