The Donald Trump administration has reported an uptick in the Islamic State’s power in Libya as strongman Khalifa Hifter has continued to march on the capital of Tripoli. 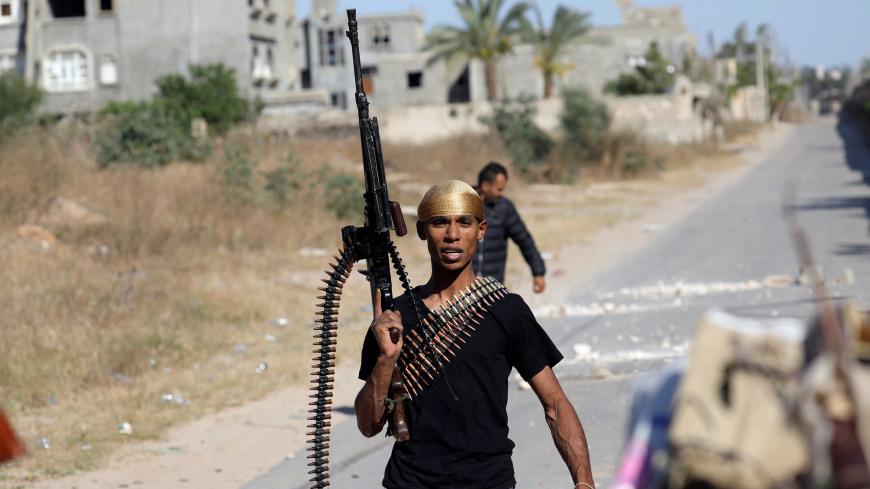 A member of the Libyan internationally recognized government's forces is seen during a fight with eastern forces in Al-Yarmouk south of Tripoli, Libya, May 7, 2019. - REUTERS/Hani Amara

The Donald Trump administration is seeing a “small” resurgence in the Islamic State’s numbers in Libya since strongman Khalifa Hifter began a bloody march on the capital Tripoli more than two months ago, the Pentagon’s second-ranking military official said.

Vice Chairman of the Joint Chiefs of Staff Paul Selva said he suspects that forces supporting the US-backed Government of National Accord in Tripoli may be able to hold out “for weeks or months” against Hifter. The United Nations says Hifter’s Libyan National Army has received weapons from the United Arab Emirates and Egypt in violation of an arms embargo.

Both the LNA and the GNA "are keeping a lid on IS for their own individual interests for a fair period of time,” Selva, who leaves his post at the end of October, told a gathering of reporters in Washington earlier this month. “Because they’re now going after one another in the capital, it’s actually taking their attention off of IS and we’ve seen a small resurgence of those [IS] camps in the central region.”

It was not immediately clear how significant the resurgence of the Islamic State has been since the April offensive began. Selva said that the Pentagon picked up that IS camps in Libya’s central region and Tuaregs were “helping out the IS militants and moving people back and forth across the border to the south.”

US troops helping to fight IS in Libya left the country in April as security conditions deteriorated. Selva said he worried about IS becoming a “third party in the fight in Libya.”

But Selva’s comments come after a series of visits from top GNA officials to Washington to put pressure on the Trump administration to clarify its position in the conflict, after the president reportedly appeared to greenlight Hifter’s offensive in an April call with the strongman. The US administration had previously insisted there was “no military solution” to the conflict.

Speaking with Al-Monitor in May, GNA-allied Ibrahim Sahad, who serves on Libya’s Higher State Council that’s led by a former Muslim Brotherhood member, said he pushed US officials to stop the flow of arms from the UAE and Egypt to Hifter.

GNA Deputy Prime Minister Ahmad Maiteeq said that forces in the city had succeeded in blunting the Eastern warlord’s momentum earlier this month, hurting the LNA’s morale and limiting its ability to replace troops, despite Hifter’s use of drones at night to supplement air raids during the day. Maiteeq said he told US officials that Hifter’s attacks will only strength IS, since they have forced the GNA to be “occupied with defending the capital.”

“We have our troops organized much better and we can start attacking him and sending him back very soon,” Maiteeq told Al-Monitor earlier this month. “The question is how far we will send him back.”

But the GNA’s counteroffensive, he said, had been stalled by concerns around civilian casualties, with the fighting concentrated around densely populated areas in Tripoli. A former senior administration official speaking not for attribution told Al-Monitor that Hifter has failed to recruit the tribes and militias in Tripoli necessary to take the capital, given his “stated intentions to eliminate all so-called ‘terrorists.’”

Maiteeq, who visited Washington earlier this month, stirred controversy in May when he hired Prime Policy Group to arrange meetings with administration officials during his trip, initially prompting the office of Prime Minister Fayez al-Sarraj to issue a statement calling on the firm to end its registration for Maiteeq.

While both sides appeared to resolve the matter, experts worry that the powerful Misrata faction of the GNA’s armed forces could stay in Tripoli if Hifter is expelled from the capital city and spark conflict. “The question is what will happen if Hifter peters out in northwest Libya,” said Jalel Harchaoui, a research fellow at the Clingendael Institute in The Hague.

But former US officials aren’t convinced that Misrata-aligned forces have designs on a takeover of the fledgling GNA army or holding the capital.

"My guess is that the GNA presidency council is probably not much more fractured than it ever was,” a former senior administration official told Al-Monitor. “But that’s also a function of how much the US is trying to hold things together. The US has greatly diminished the degree to which it is monitoring or actively trying to improve the situation in Libya.”