Congress demands allies crack down on IS foreign fighters

Lawmakers of both parties are threatening to tighten travel restrictions on countries that don't incarcerate returning fighters. 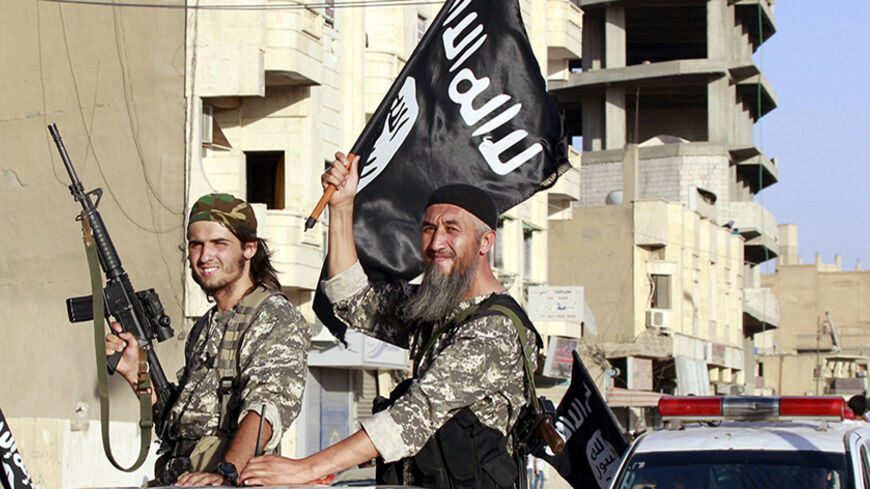 Islamic State fighters wave flags as they take part in a military parade along the streets of Syria's northern Raqqa province, June 30, 2014. - REUTERS

US lawmakers threatened to make it harder for foreigners to travel to the United States if their countries don't take tougher action to stop their citizens from joining the Islamic State.

Bipartisan frustration with the continued flow of foreign fighters to Syria and Iraq spilled out into the open Dec. 2 as the State Department's point person on the issue testified before Congress for the first time. Members of the House Foreign Affairs Committee repeatedly warned Robert Bradtke that US allies must do more to stop what a recent UN report deems to be an "unprecedented" influx of 15,000 fighters from 80 countries who have joined the Islamic State (IS) and similar groups.

"All of us have concerns about our Middle East partners, and what are they doing to stem the tide? We can't do it by ourselves," panel member Doug Collins, R-Ga., told Al-Monitor after the hearing. "There's concerns that they're condoning the behavior, turning a blind eye: 'We don't really care what you do, you come back and we're going to forget about it.'"

"I don't care if you're just peeling potatoes in the mess: If you're part of the [IS] army, you belong in prison." Rep. Brad Sherman, D-Calif.

European countries, which make up a majority of the 38 countries that enjoy visa-free travel to the United States, are another source of concern. These include France and Great Britain, the top two European sources of foreign fighters according to a tally from Radio Free Europe, as well as Denmark, which is seeking to rehabilitate returning fighters rather than lock them up.

Rep. Brad Sherman, D-Calif., a senior Democrat on the committee, demanded that Radtke produce a list of all countries with which the United States has visa waiver agreements and an assessment of whether they're living up to their international requirements.

The UN Security Council passed a binding resolution in September that requires countries to have laws in place that permit the prosecution of "their nationals and others departing their territories who travel or attempt to travel for terrorism purposes," according to a fact sheet from the State Department. It also requires countries to have laws that permit the prosecution of "willful provision or collection of funds by their nationals or in their territories with the intent or knowledge that they will be used to finance travel of foreign fighters" and the "willful organization or facilitation by their nationals or in their territories of such travel."

"UN Resolution 2178 requires UN members to crimininalize those who go to Syria and Iraq to fight with extremists. Have our European allies — particularly visa waiver countries — complied with that?" Sherman asked.

Bradtke answered that various countries are trying different approaches based on their best assessments.

"There are countries that do believe that some of the fighters who come back have been disillusioned by their experience," he said. "And they believe that in this case, those fighters should be monitored rather than incarcerated."

Asked if those countries would be deemed in compliance with the resolution, Bradtke said he wasn't a lawyer but did not criticize their approach. He added that proving participation with IS in a court of law could be very difficult.

"I think there are different approaches about how to deal with returning fighters, particularly ones who have not carried out any attacks," he said.

Sherman wasn't convinced. "I don't care if you're just peeling potatoes in the mess: If you're part of the [IS] army, you belong in prison," Sherman said.

He introduced legislation in September as the threat of IS came into sharper focus in September that would suspend the visa waiver program for the US Comptroller General to assess any national security risks posed by the program. Another Collins bill would suspend military assistance to countries that "harbor persons that provide material or financial support" to IS.

"We've got folks who could literally be in Syria today, go to Istanbul, be in Rome, be in Atlanta and be in my hometown an hour later under the visa waiver program because they have a passport from a Western country," he told Al-Monitor.

Bradtke, a career diplomat, was named in March as the senior adviser for Partner Engagement on Syrian Foreign Fighters. Since then he's visited 17 countries — including Turkey, Morocco, Tunisia, Qatar, Kuwait and the United Arab Emirates — to "press for greater cooperation both bilaterally and regionally on information sharing, border security, law enforcement, capacity building, counter-messaging and countering-violent extremism, and terrorist financing, all of which play a part in addressing the foreign fighter issue," according to the State Department.

Republican lawmakers used the hearing to repeatedly press Bradtke on the Obama administration's overall strategy in Syria, something he said he wasn't cleared to do. Bradtke was also asked by Rep. Ted Poe, R-Texas, whether Turkey was "complicit" in allowing fighters to cross its border into Syria; he said no.

Rep. Ron DeSantis, R-Fla., demanded to know if the State Department has revoked the passports of any US citizens who have returned home after fighting in Syria or Iraq (the answer is no). He said he asked the question after seeing a CBS interview with FBI Director James Comey back in October.

"Ultimately, an American citizen, unless their passport is revoked, is entitled to come back," Comey told "60 Minutes." "So someone who has fought with [IS], with an American passport, wants to come back, we will track them very carefully."

"A lot of my constituents were really floored by that," DeSantis said. "They would say: 'You go and you choose jihad, you leave America behind, and now you have an entitlement to come back simply because you have a valid passport and we're not going to really do much [about it]."

Bradtke said Secretary of State John Kerry has the authority to revoke passports but would only do so in "relatively rare" cases.

"I think an [IS] fighter would qualify as an extreme circumstance, since they're cutting off Americans' heads," DeSantos replied.