A handful of conservative Republicans have launched a congressional group dedicated to forcing the Palestinians to admit their "defeat." 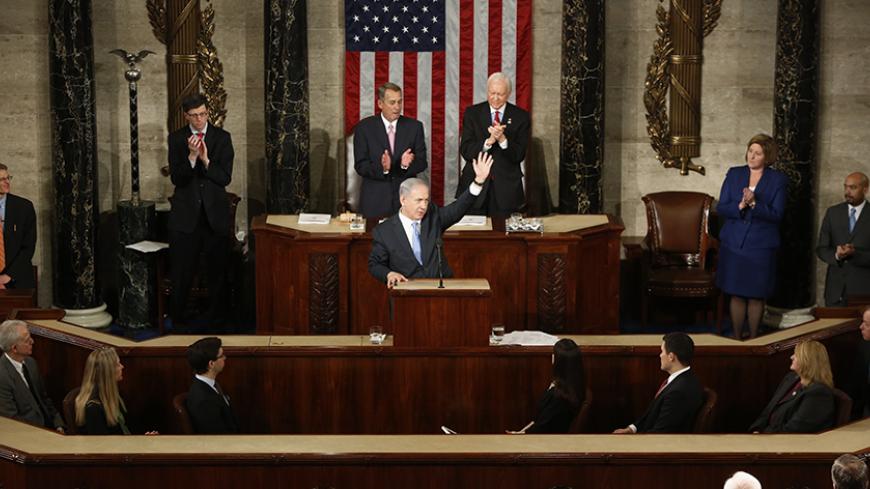 Israeli Prime Minister Benjamin Netanyahu (C) acknowledges applause at the end of his speech to a joint meeting of Congress in the House Chamber on Capitol Hill, Washington, March 3, 2015. - REUTERS/Jonathan Ernst

Congress already had at least four pro-Israel caucuses. Now it can add an anti-Palestinian one to the list.

A handful of conservative Republicans unveiled their Israel Victory Caucus at an April 27 Capitol Hill event. The group's stated goal is to persuade the Palestinians that they've been defeated and they should recognize Israel's right to exist as a Jewish state as a precursor to any negotiations. The PLO formally recognized "the right of the State of Israel to exist in peace and security" in 1993.

"Israel has been at war with its immediate neighbors over its right to exist as the nation-state of the Jewish people for nearly 70 years," said Rep. Bill Johnson, R-Ohio, who co-founded the caucus with Rep. Ron DeSantis, R-Fla. "It is our view that Israel has been victorious in this war, and that this reality must be recognized in order for any peace to be achieved between Israel and its Palestinian neighbors."

DeSantis, a member of the House Foreign Affairs panel, traveled to Israel last month to scope out potential sites for the US Embassy if it relocates from Tel Aviv to Jerusalem. He said he was confident President Donald Trump would announce his decision to move the embassy when he visits Israel in late May or early June.

"I think the announcement of that trip is a signal that it is more likely to happen than not," he said, "and sends a powerful signal to other countries around the world that America is back, and that we will stand by our allies and will not let folks cower us into not doing the right thing."

The caucus is the brainchild of Daniel Pipes, a former academic who leads the nonprofit Middle East Forum. The left-leaning Southern Poverty Law Center has labeled Pipes an Islamophobe, but he insists he supports moderate Muslims against radicals.

Pipes has long argued that the current approach, which favors direct negotiations between two equal sides, is bound to fail. Better for everyone involved, he argues, for the Palestinians to be forced to admit that they have lost.

"Only the definitive victory of Israel — the Middle East’s only haven for free speech, women and minorities — will bring an end to this fight and eventual peace to the region," the Middle East Forum argues in an invitation to the caucus launch. The group says that Knesset member Oded Forer of the right-wing Yisrael Beitenu has made an official request to open a sister Israel Victory Caucus in Jerusalem, "and it is hoped that the two caucuses will hold events together this July in Jerusalem to push the shared agenda forward among both governments and populations."

According to the forum, Reps. Keith Rothfus, R-Penn., Doug Lamborn, R-Colo., and Alex Mooney, R-W.Va., also attended the launch of the caucus. But the reception failed to get any traction among more moderate members, raising criticisms that it's a purely partisan effort that further erodes the longtime bipartisan support for Israel while achieving little or nothing of value.

"I think getting the Palestinians to accept a two-state solution that's consistent with Israeli security is hard enough. Asking them to say 'we're a bunch of losers' is an unnecessary concession," said Rep. Brad Sherman, D-Calif., who co-chairs the bipartisan Israel Allies Caucus.

Another co-chairman, House Foreign Affairs ranking member Eliot Engel, D-N.Y., lamented the fragmentation of support for Israel on Capitol Hill. He said he wasn't invited to participate in the launch of the new caucus.

"I think Israel should remain a bipartisan issue," he told Al-Monitor. "And so when you have groups breaking off and they're all partisan," that's not optimal.

Rep. Jerrold Nadler, D-N.Y., a member of both the Democratic Israel Working Group and the Congressional Hellenic-Israel Alliance, said the new caucus' rejection of two-state talks was doomed to fail.

"What's the point of this caucus?" Nadler asked. "What are they going to add? How will it help Israel?"

"In the manifesto outlining the group’s approach, Daniel Pipes writes 'Palestinians will have to pass through the bitter crucible of defeat, with all its deprivation, destruction and despair' before the Israeli-Palestinian conflict will be resolved," J Street wrote in a fundraising email. "That’s barbaric thinking. And it’s totally at odds with the views of Israel’s security establishment, which consistently argues Palestinian despair leads to instability, violence and disbelief that Israelis want peace."

"Wars end when one side gives up," the forum wrote in an online posting. "Which side do you want to win, J Street? The Palestinian?"