Three Democratic candidates willing to challenge the bipartisan orthodoxy on Israel are likely to win seats in Congress next year. 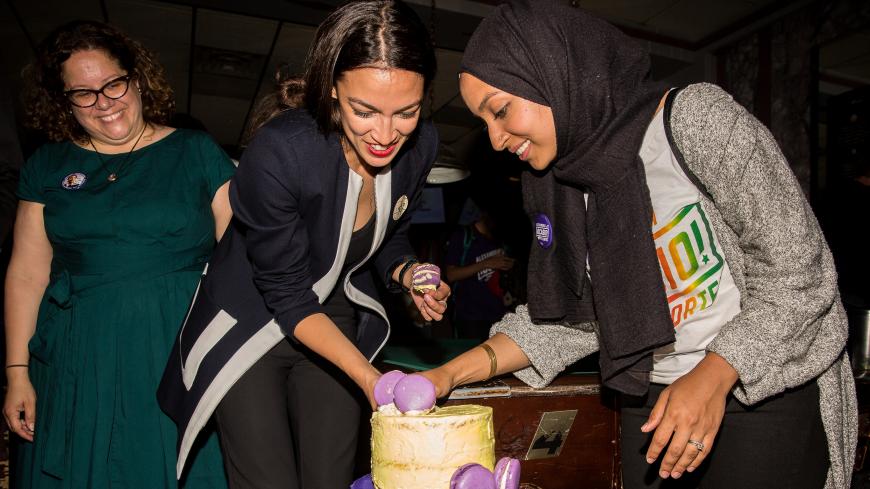 Alexandria Ocasio-Cortez called the Israeli military’s killing of Gaza protesters a “massacre.” Ilhan Omar has referred to Israel as the “apartheid Israeli regime.” And Rashida Tlaib would be the first Democrat in Congress to explicitly reject a two-state solution in favor of a one-state solution.

Their willingness to challenge bipartisan orthodoxy has put them on a collision course with Democratic leaders as the Donald Trump administration tilts US policy ever further in favor of Israel.

“These three young, women of color have been more to the left than any previous member of Congress [on Israel],” said Joel Rubin, a former State Department liaison to Congress under the Barack Obama administration. “They will feel that potentially it’s in their political self-interest to communicate that, which is a different dynamic.”

Tlaib, who is running unopposed for a House seat in a Michigan district, is set to become the first Palestinian American congresswoman after narrowly winning her primary race earlier this year. She and Omar, a Somali refugee from Minnesota, are likely to become the first two Muslim women in Congress. Meanwhile, New York Democrat Ocasio-Cortez has closely tied herself to progressive stalwart Sen. Bernie Sanders, I-Vt., who has not shied away from criticizing Israel since his failed 2016 presidential campaign.

“You essentially have a dynamic in the Democratic Party of a significant number of progressive candidates and members challenging the status quo on a variety of issues,” said Rubin, a former political director for the liberal Israel policy lobby J Street. “And much of the Democratic base looks at Palestinian rights as a core issue.”

It remains an open question whether Democratic leaders would permit challengers of the status quo such as Ocasio-Cortez, Omar and Tlaib to join the foreign affairs panel — or if they would even seek such a role. Nevertheless, they could use their influence in Congress as an ideological lightning rod for a Democratic base that has become increasingly pro-Palestinian in recent years.

J Street’s political action committee has endorsed 152 Democratic candidates for Congress this election cycle. But those endorsements exclude both the pro-Israel old guard like Schumer and Engel as well as the new firebrands like Ocasio-Cortez and Omar.

But J Street did endorse Tlaib, only to rescind the endorsement after she won her primary.

At issue were Tlaib’s statements made during an interview with In These Times, in which she lambasted Israeli Prime Minister Benjamin Netanyahu’s “apartheid policies.” She went on to say that she does “not support aid to a Netanyahu Israel” and called for a single state where Palestinians enjoy equal rights, arguing that “separate but equal does not work.”

“This isn’t your parents' or your grandparents’ Democratic Party anymore.”

While J Street is also fiercely critical of the Netanyahu government, the interview contradicted its policy preferences.

“Support for a two-state solution is a foundational principle for J Street and that was for us a step too far,” J Street’s National Political Director Aaron Davis told Al-Monitor. Davis noted that while J Street no longer backs any of the three candidates, it continues to engage with their campaigns and remains willing to do so.

Ocasio-Cortez has also balked at committing to a two-state solution, noting in July that she would not announce her position until she finished engaging with activists. Conversely, Omar unequivocally endorsed a two-state solution in August despite her 2012 remarks stating that “Israel has hypnotized the world.”

“They don’t represent the Democratic Party’s views on this issue,” Halie Soifer, the executive director of the Jewish Democratic Council of America (JDCA), told Al-Monitor. “Republicans continue to try to politicize Israel every election cycle. They try to use this as a wedge issue to pick off Jewish voters.”

But even one of JDCA’s endorsed House candidates, New York’s Antonio Delgado, took heat last week during a debate for stating that “Israel is not a Jewish democracy” on account of its West Bank settlements.

“I do think it’s kind of wild how much attention is given to one Democrat who’s expressed some skepticism about the validity of a two-state solution from the left when we have a president and administration that has actively stopped talking about a two-state solution … and is pushing us toward a one-state nightmare,” said Logan Bayroff, J Street’s communications director.

Despite moving the US Embassy to Jerusalem and slashing economic and humanitarian aid to the Palestinians, Trump finally endorsed a two-state solution as his preferred solution to the Israeli-Palestinian conflict last month. Meanwhile, right-wing Reps. Bill Johnson, R-Ohio, and Ron DeSantis, R-Fla., co-founded the Israel Victory Caucus, which urges the Palestinians to accept defeat at the hands of the Israelis in lieu of direct negotiations.

Republicans have touted their pro-Israel credentials as a counterweight to progressives they deem insufficiently supportive of Israel in their long-running quest to peel off Jewish voters, who overwhelmingly identify as Democrats.

Just this month, Sen. Ted Cruz, R-Texas, attacked his opponent Rep. Beto O’Rourke for accepting $160,000 in campaign funds from J Street, which he described as “rabidly anti-Israel.” And Rep. Duncan Hunter, R-Calif., who is under federal indictment for embezzling campaign funds, has tried to smear his Palestinian-American opponent Ammar Campa-Najjar — a Christian — as an “Islamist.”

But a poll this month from the Mellman Group found that more than 62% of American Jews "disapprove of Trump’s "handling of relations with the Palestinians.” The poll also found that 74% of Jews intend to vote Democrat in the upcoming midterm elections.

“These changes don’t happen overnight, but I think it takes a little time for things to catch up,” Neil Strauss, the digital director for the Republican Jewish Coalition, told Al-Monitor. “Our point is this isn’t your parents' or your grandparents’ Democratic Party anymore.”