Mohammad Harfoush analyzes the growing influence of the Salafist jihadist group Jabhat al-Nusra, and concludes that despite its military success, it has "contributed to the disarray of the revolution." 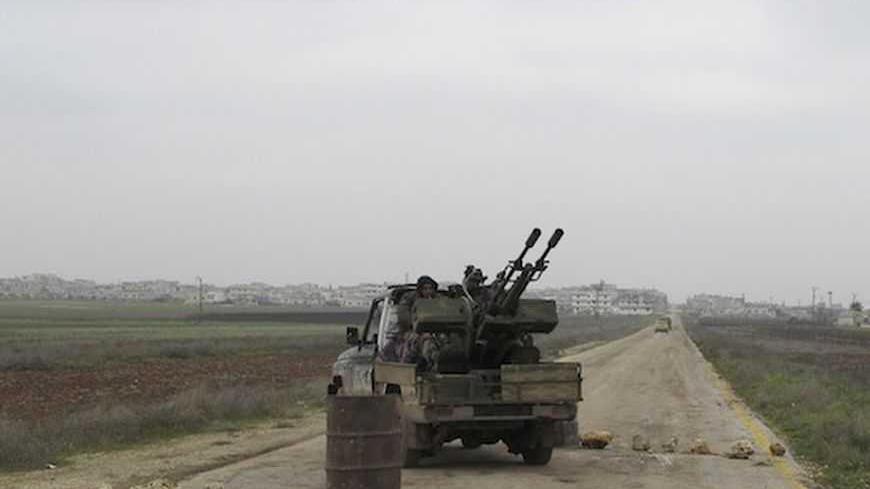 Much has been written about Jabhat al-Nusra, which has been fighting alongside the Free Syrian Army (FSA). Many fear that its power is increasing as the opposition gains strength, especially now that some political and military analysts argue that the end is approaching for the Syrian regime.

Jabhat al-Nusra li-Ahl al-Sham, to give its full name, is a Salafist movement that first called for establishing an Islamic state in Syria when violence between the regime and opposition forces intensified at the end of 2011. In its first statement, issued on Jan. 24, 2012, the front called for jihad in Syria and urged the people to take up arms against the Syrian regime.

Jabhat al-Nusra has taken credit for several major attacks, notably the bombings of the general staff building in Damascus in fall 2012, of the Air Force Intelligence Directorate headquarters in Harasta and of the military club in Aleppo. The international community is increasingly worried about Jabhat al-Nusra, which is affiliated with the Sunnis, Syria's biggest demographic group. Jabhat al-Nusra is alleged to include Islamist extremists who plan to implement their personal agendas once Bashar al-Assad's regime falls and Syria enters a transitional phase.

When the front was first established, most of its members were experienced Syrian combatants who had fought previous jihadist battles in Iraq, Afghanistan, Chechnya and elsewhere. Its fighters today include Arabs, Turks, Uzbeks, Chechens, Tajiks and a minority of Europeans. To join the front, a recruit must commit to religious obligations, obtain a recommendation from a trusted person and prove his seriousness and discipline.

Last September, the US classified Jabhat al-Nusra as a terrorist group — a classification that has been disputed by representatives of the Syrian opposition, FSA leaders and many rebels. The US also imposed financial sanctions against one of the front’s supposed leaders, Mayser Ali Moussa Abdallah Jabouri, a former Iraqi member of al-Qaeda in Mosul, Iraq.

The front has led the battle against Assad’s regime and its success has overtaken that of the FSA, which is fraught by countless divisions and a lack of organization, equipment and finances — unlike Jabhat al-Nusra, which gets support from unknown sources. Many FSA members have joined Jabhat al-Nusra, especially after going for months without payment from the FSA. The salary per soldier does not exceed $150 per month.

Jabhat al-Nusra's fighters are deployed on Syria's main fronts, and they raise black flags emblazoned with the slogan, “There is no god but Allah.” Jabhat al-Nusra members also operate in several rear bases, including Atma village near the Turkish border.

Abu Mohammad al-Julani, one of Jabhat al-Nusra’s founders, declared in a press release that the group's goal was to restore “the power of God on earth.”

His statement rejected calling for help from the West in eliminating the Baathist regime — a call it said would be “misleading and a crime that God doesn’t forgive." The press release attacked Iran, saying that “the ongoing Iranian support of the Baathist regime is aimed at empowering the Shiites in this holy land in an attempt to bring the Persian Empire back to life. The Levant is used by Iran as a means to achieve this obsolete purpose.”

Although information about Jabhat al-Nusra is scarce, as its members “refuse to talk to journalists or Syrian citizens,” some estimate that its militants in Aleppo number only 6,000.

Discussing the front’s philosophy, member Abi Fatma al-Halaby said: “Our aim is to defend Islam and Muslims and to support the persecuted. In that context, we are closely linked to the Syrian people. We are not introverts and unwilling to hold dialogues as some media outlets portrayed us. We tolerate our opponents and are ready to hold a dialogue and turn a blind eye to some mistakes in order to reach a settlement that guarantees the public interest."

Halaby insisted that an Islamic regime is the only regime that can be accepted in Syria. Halaby promises that "non-Muslims [would] be treated in a way God almighty approves, and in compliance with the teachings of the Sharia, especially those who do not brandish weapons in the face of Muslims or empower the regime."

Experts are divided over the importance of Jabhat al-Nusra. Some point to the example of Libya, where the armed groups that took part in the revolution have been sidelined. Other experts believe that role of the group has been hyped by the Syrian regime in an attempt to show the world that it is waging a war against terrorism.

There is no doubt that the Salamiyah blast, for which Jabhat al-Nusra claimed responsibility, put the Syrian revolution in a delicate spot. Jabhat al-Nusra should assess its practices. Although it is skillfully fighting the regime, its blacklisting as a terrorist group has contributed to the disarray of the revolution. As a result, it is helping the regime to persist and weakening an already tenuous society.