A Turkish official has said Ankara will not support the al-Qaeda-linked Jabhat al-Nusra in Syria. 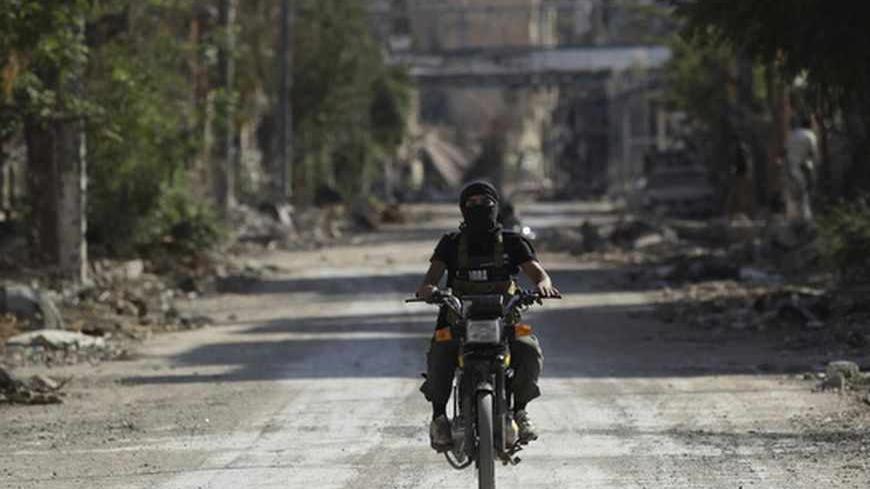 A fighter from the Islamist Syrian rebel group Jabhat al-Nusra rides a motorcycle along a deserted street in Deir al-Zor Aug. 17, 2013. - REUTERS/Khalil Ashawi

Some may be wondering about the title of this article. After all, although Jabhat al-Nusra is fighting a regime Ankara wants to eliminate in Syria, shouldn’t the radical Islamist group's announcement of its affiliation with al-Qaeda be enough reason to consider it a threat to the "secular and democratic” Turkish republic?

A senior Turkish official spoke on Sept. 4 in Istanbul to a small group of columnists with the condition that they not reveal his name and position. He said, "Al-Nusra is also a threat for us. The entire political echelon shares this feeling. It is out of the question for Turkey to support Al-Nusra in any manner.”

By "political echelon," he meant the Islamist Justice and Development Party (AKP) and its government. From this statement we deduce that the Islamist AKP also sees al-Qaeda as a threat. Since we used the official’s message of normalization as the headline of this article, you wouldn’t be far off in thinking we had considered Ankara's earlier position regarding Al-Nusra as abnormal or irregular.

One doesn’t need expert intelligence to grasp the abnormality of the earlier situation. It was enough to have minimal knowledge of current issues and decent judgment to look at a map of Syria and understand that Al-Nusra and other jihadist organizations alongside the Free Syrian Army had total freedom of movement in Syria’s border area with Turkey. Turkey did not need to train or arm the jihadists. But it would have impossible for these militant groups to achieve such superiority against regime forces in the region that includes Aleppo without logistical support from sources in Turkey and unhindered access to the border.

The first suggestions of Ankara’s changing relations with Al-Nusra followed the domination by the Kurdistan Workers Party’s Syrian extension, the Democratic Union Party (PYD), of the Kurdish-populated Syrian towns of Afrin, Kobani, Amude and Derik, which were abandoned by regime forces and the state. Ankara, perceiving a major threat from an experiment in autonomy by Syrian Kurds under the leadership of the PYD, was accused of exploiting the jihadists to foil this Kurdish move. At that time, Al-Nusra had not yet declared, "We are al-Qaeda."

The border town that witnessed the bloodiest battles between Al-Nusra and the PYD was mixed Arab-Kurd Ras al-Ain, or Serekaniye, as the Kurds call it. There were claims that Ras al-Ain’s Turkish neighbor Ceylanpinar was serving as a logistical base for Al-Nusra.

In December 2012, Gultan Kisanak, the co-chair of Turkey’s legal Kurdish Peace and Democracy Party had drawn attention to the situation in Ceylanpinar and warned Ankara not to export strife to Syria, saying, "The situation in Syria is spreading to Turkey. The local people of Ceylanpinar are seeing with naked eyes that some armed groups are beefed up and transported across the border to Syria. Most of them are from Al-Nusra. They are brought in buses. There is pressure on some Arab villagers of Ceylanpinar to host these groups in their homes. There are no clashes between Kurds and Arabs of Ras al-Ain. [President Bashar al-] Assad forces have totally withdrawn. Unless Turkey exports strife, there is no cause for clashes there."

Although the PYD expelled Al-Nusra from strategically important Ras al-Ain last July, these two groups are still fighting in the area. Meanwhile, talks were rife in informed quarters that the United States was becoming disturbed by Ankara’s support for jihadists led by Al-Nusra, at least by allowing them to use Turkish territory. Finally, last April, Al-Nusra declared its affiliation with al-Qaeda and its ideology. This development compelled Ankara to adopt clear positions.

It was expected for the United States, increasingly annoyed by the support the "bad guys" were getting from Turkey, to convey its uneasiness to the Turkish side during Prime Minister Recep Tayyip Erdogan’s official visit to Washington in mid-May. That such a warning was issued was reported by the Turkish press.

Then came the attack of the al-Qaeda-linked al-Shabab organization in Somalia against the Turkish Embassy in Mogadishu, killing one policeman and wounding three others. No doubt this attack that served as a warning to Turkey about the seriousness of the threat posed by terror organizations guided by al-Qaeda ideology. Despite that, Ankara and Washington have different approaches on how to treat Al-Nusra in Syria.

The United States put Al-Nusra on its list of terror organizations, while Turkey sees it as "a group with extremist tendencies." At one time, Ankara had noted that unless the Syrian crisis is solved in a short time, the radical groups are likely to be strengthened. As anticipated, radicals did become stronger. Intelligence available last December, when the United States placed Al-Nusra on its list of terror organizations, put the group at a total of 700 militants, 300 of them foreigners. Now this number is estimated at 7,000 to 8,000, a quarter of them foreigners.

Nevertheless, according to Ankara’s assessments, once there is a legitimate authority in Syria, it won’t be difficult to cope with Al-Nusra. The logic behind this optimism could result from the ratios of Sunnis to the rest of the populations of Syria and Iraq.

If one considers that al-Qaeda in Iraq is nourished by the discomfort of minority Sunnis and assumes that a regime that would be accepted as legitimate in Syria will be based on a majority of Sunnis, it may not provide fertile ground for al-Qaeda.

At the end, it all depends on ending the Syrian civil war with a political solution soon. Otherwise, Al-Nusra will continue to grow and be the enemy of all minorities, enflaming the sectarian war in Syria.

We are now observing in the Syrian context how actors who think they are exploiting al-Qaeda for their political goals and allow them to operate freely suffer greatly in the end.