The Justice and Development Party (AKP) government is struggling with whether its interests are better served by jihadists or Kurdish groups controlling areas of northern Syria. 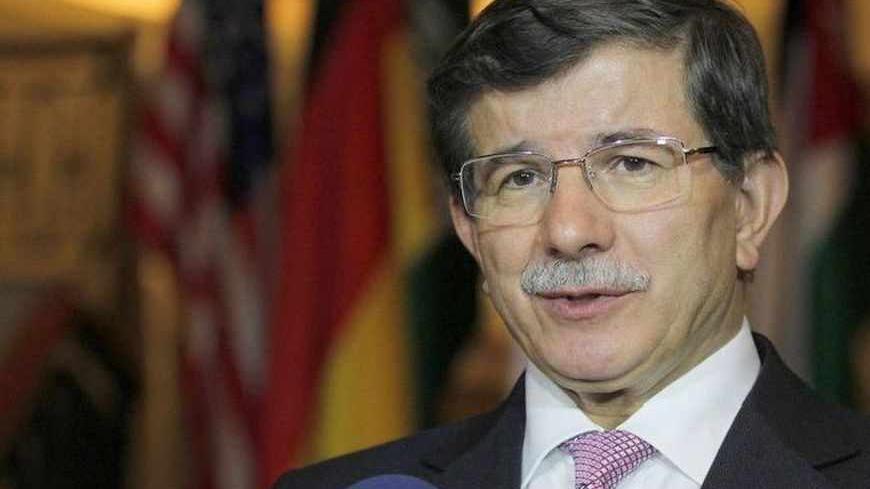 Turkish Foreign Minister Ahmet Davutoglu speaks to reporters after the Friends of Syria alliance meeting in Amman, May 22, 2013. - REUTERS/Muhammad Hamed

Perhaps the best way to describe how these two towns were once one is to use their Kurdish names: Ceylanpinar becomes "Serekani," and Ras al-Ain "Serekaniye.”

Today, Ceylanpinar's mayor, now serving his second successive term, is Ismail Arslan from the Kurdish Peace and Democracy Party (BDP), which is best described as the "unarmed PKK."

Since July 19, the flag of the Democratic Union Party (PYD), the most powerful Kurdish movement in Syria, has been flying over the Rasulayn border crossing. According to reports in Turkish newspapers, the flag of the Free Syrian Army (FSA) that used to be there was replaced by the PYD flag. The simplest way to describe the PYD is the "PKK in Syria."

Although it was the FSA flag that was taken down, Rasulayn was under the physical control of radical Islamist Jabhat al-Nusra, which is fighting against the Baath regime. The shortest way to describe Jabhat al-Nusra is "al-Qaeda in Syria."

The PKK in Syria forced al-Qaeda in Syria to retreat by fighting them in Rasulayn. In a way, the "PKK in the Middle East" established a continuity on the level of Kurdish political reality between Ceylanpinar/Serekani on the Turkish side and Ras al-Ain/Serekaniye on the Syria side. They accomplished this with elections on the Turkish side and with guns on the Syrian.

Whether one likes it or not, this is the Kurdish reality at the moment in that area.

Since the situation at Rasulayn became known, it has been causing occasional, borderline panic reactions from Justice and Development Party (AKP) officials. It is interesting that the capture of Rasulayn by PYD’s military wing, YPG, was announced on July 18 with a statement of the Turkish chief of general staff.

A day later, Turkish Foreign Minister Ahmet Davutoglu, in a joint news conference with Greek Foreign Minister Evangelos Venizelos, was answering a journalist’s question on the situation at Rasulayn: "After this, any threat to our border security will be met with the most effective and immediate response. ... In the context of developments in Syria, the vacuum created by intensified clashes in Homs is exploited by groups in Rasulayn who want fill that vacuum. … Any new fait accompli or effort to create a de facto situation will make the situation more fragile and may cause much more negative outcomes.”

The same day, Yalcin Akdogan, the chief adviser of Prime Minister Recep Tayyip Erdogan, in an article published in the daily Star used the following words to warn the PYD: “Developments in the last days are causing serious fragility. … The PYD, which is said to be declaring democratic autonomy, should not play with fire. … As the developments along the Syrian border become a different security concern, Turkey cannot go along such a fait accompli. … Those who seek adventures that exceed the boundaries of romanticism and play with fire will above all hurt themselves.”

The informative news-commentary in Al-Monitor of July 19 by Wladimir van Wilgenburg, who follows Kurdish actions in the Middle East closely, under the title of “Syrian Kurds Preparing for Self-Governance” informed readers that the PYD, with a six-month program, is aiming at an autonomy model that calls for a constitution and parliamentary elections.

Exactly a year ago, AKP government officials had interpreted the Kurds under PYD taking over some Kurdish areas evacuated by regime forces and initiating autonomy efforts in those areas as a de facto situation that Turkey could not accept and emphasized that they perceived the Kurdish moves as a security threat against Turkey.

Reactions today are the same. But there is an interesting angle to this reaction, as it once again reveals the ideological and political choices of the problematic Syrian policy of the AKP government which must be questioned.

The angle is that Ankara did not at all worry when Rasulayn was under the control of al-Qaeda in Syria, but reacts harshly when the town is taken over by the PKK in Syria, and says it is a threat against Turkey.

The interesting conclusion one reaches from this attitude is that Ankara wishes for Jabhat al-Nusra, which is on the US list of terror organizations, to control Rasulayn.

Although the PYD’s military force, YPG, may have in its ranks Kurds from other neighboring Kurdish lands, PYD is originally Syrian and, unlike the PKK, it is not on the terror list of the United States or the European Union.

As we assume that Ankara has been engaged in a peace process with the PKK since December, we find the current attitude of Turkish government baffling. If there really is a peace process aimed at solving the Kurdish issue, it has to be assumed that this process means none of the PKKs in the region are threats against Turkey.

While Turkey’s PKK operates within the parameters of a solution process with Turkey, how can a PYD that cannot possibly pursue an independent regional strategy threaten Turkey?

If there is peace process between Turkey and the PKK, the Syrian Kurdish regions and Syrian Kurds will become topics of economic and political cooperation with Turkey, even if the Syrian Kurds had made some progress last year and have been developing their own administrative structure.

Also, did those in Ankara reacting so angrily really expect the peace process they started with the PKK in Turkey to lead the movement to give up its attempts at autonomy in Syria? Turkey’s peace with its own Kurds would not have stopped the Syrian Kurds from their choice of moving forward with their own strategic goals, but it would have prevented those in Ankara from perceiving it as a threat.

What can Ankara do against all this? Will Ankara support al-Qaeda affiliate Jabhat al-Nusra or the FSA against the PYD as it did last year and carry out a proxy war? Though the situation on the field is becoming difficult for radical Islamists, this cannot be a valid option

In that case, will the AKP government send its army across the border to quash the Syrian Kurds?

If we had opted for that option last year, the already regionalized Kurdish issue would have instantly become an international issue. The same applies this year. For the AKP government, a direct military intervention would be suicidal. That is why Ankara should refrain from empty threats. Fine, but what did Ankara do last year when faced with the situation the Syrian Kurds devised last year?

We all know the answer: Ankara started a peace process that allotted the lead role to Imrali prisoner Abdullah Ocalan. This is how the Kurdish issue was prevented from going international and the PKK was extracted from the Tehran-Damascus axis.

While doing all that, Ankara did not take a single democratization step the PKK has been demanding as part of confidence building. If these steps had been taken and the process was moving along soundly, there wouldn’t have been any need for Ankara to be concerned about the Kurdish phenomenon in Syria.

Delay in not taking confidence-building steps simply magnifies the distrust of both sides.

For example, Ankara is arguing that the PKK is stalling in withdrawing its armed forces from Turkey. Meanwhile, in the first statement of Cemil Bayik, who was appointed as the co-chairman of the Union of Kurdistan Communities to replace Murat Karayilan, said he was "warning the AKP government for the last time" and called on the government to take concrete steps immediately to ensure the continuation of the process and noted that unless this is done, the process won’t make progress.

The AKP government, by not taking the democratization steps it had promised, has turned the peace process into a vicious circle and gone back to the point where it was last year. Its template responses to developments support this view.

Unless Turkey renews its engagement to the peace process, the cost of this neglect for Turkey and the government could be very high.