The signs were obvious that an open rift between the Syrian National Coalition and the main Islamist rebel factions was imminent. 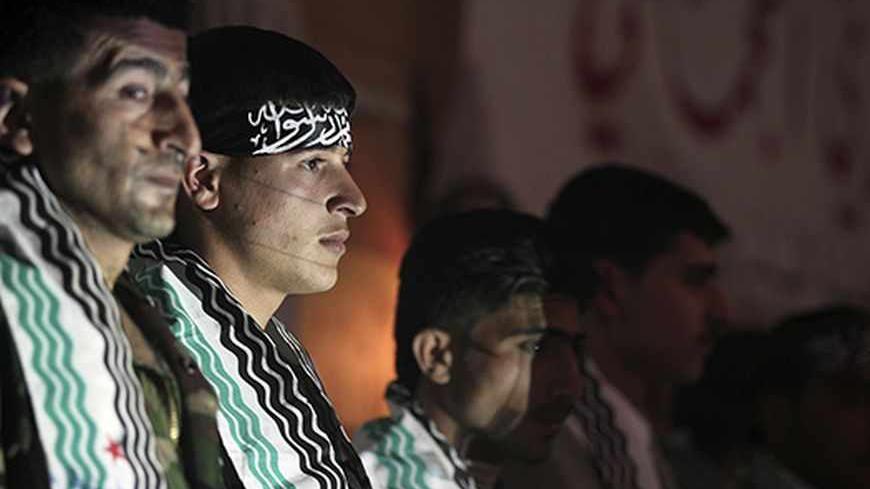 Grooms from the al-Tawhid Brigade, which operates under the Free Syrian Army, stand at a ceremony in Aleppo's countryside, March 15, 2013. - REUTERS/Giath Taha
Edward Dark
@@edwardedark
September 30, 2013

ALEPPO, Syria — There were telltale signs of the impending rift between the Syrian National Coalition and major rebel groups on the ground, mostly Islamist militias such as the moderate Liwa al-Tawhid, the Salafi Ahrar al-Sham, thought to be financed by the Gulf, and the al-Qaeda-affiliated Jabhat al-Nusra.

We could all see it coming, and it shouldn't have come as a surprise to anyone when it finally did. In fact, rebel factions have repeatedly threatened to delegitimize the coalition, citing various grievances such as its close ties to the West, its lack of assistance to both fighters and civilians inside, and its inability to secure any solid palpable support for the revolution.

On the face of it, this may seem like an ideological struggle between Islamists and secularists, with the coalition referring to the fracture as a "disconnect," but a closer look reveals otherwise. Although the coalition was expanded from the former Syrian National Council, which was dominated by the Muslim Brotherhood, it still has a large Islamist contingent. This is curious, as Liwa al-Tawhid, one of the main rebel groups that have now disowned the coalition, is reported to have close working ties with the Brotherhood, and shares its moderate Islamist ideology.

That the coalition calls for a democratic civil state, whereas the Islamist rebels call for an Islamic Sharia state, may be a red herring. More likely the issue at hand is one of a simple power struggle. The rebels were unnerved by the coalition's recent moves to appoint Ahmad Saleh Touma as head of an opposition government, which would start administering the regions of Syria outside the regime's control.

They feared their hard-earned territory, which they sacrificed much blood and treasure to gain, would be taken away by bureaucrats who had never fired a shot. In fact, the wording of the statement by the rebels specifically makes mention of Touma's government and their refusal to recognize it. It's no secret inside Syria that rebels have little faith in the coalition, and would never allow it to govern. The fact that it also is unpopular with the ordinary people means it has little traction on the inside.

ISIS on the move

Power struggles among rebels are very common, whether it's for small areas of territory or for spoils. But recently the small skirmishes have turned into full-scale confrontations with the other al-Qaeda affiliate, the Islamic State of Iraq and al-Sham (ISIS), engaging in a battle for control with more mainstream rebel groups. After consolidating its power in Raqqa, and several towns in Idlib and Hassakeh, it moved swiftly and took Azaz from the Asifat al-Shamal battalion, formerly headed by the now-deceased Ibrahim al-Dadikhi. He had made headlines after he kidnapped a bus full of Hezbollah supporters on their way back to Lebanon from a pilgrimage early last year; several of the Hezbollah supporters are still in captivity.

ISIS’ pretext was that the rebels were in league with American and German intelligence, and had met US Sen. John McCain, R-Ariz. This was a weak excuse, given that ISIS had already announced its intentions in Syria. It wanted to set up its own Islamic state, and needed to conquer as much territory as possible. Smaller rebel factions would prove to be no match for their fierce and disciplined fighters, particularly considering many smaller rebel militias were less interested in fighting and more interested in looting.

That the ISIS took Azaz so quickly and easily from the rebels who had driven out and defeated the regime's forces — the much photographed burned-out husks of tanks still lying in the streets of the town are a testament to those fierce battles — has raised serious alarms everywhere. The battle showed ISIS was stronger than anyone thought or dared to publicly acknowledge. Liwa al-Tawhid tried to broker a cease-fire, but it didn't hold for long. ISIS, according to local reports, is now on the move in the Aleppo countryside, taking over smaller towns and strategic ones like Atareb, which threatens the Bab al-Hawa border crossing with Turkey, after the al-Salam crossing was closed when Azaz fell.

People here have mixed and contradictory feelings about ISIS. Their harsh puritan interpretation of Islam and their penchant to impose Sharia law as they see it by force has many people worried and runs contrary to social traditions, even in conservative areas.

There have been a number of protests against them in areas they control, the protesters are usually dealt with harshly, often fired at or arrested. Needless to say, minorities are terrified of them, as they have been known on occasion to summarily execute non-Sunni Muslims, considering them as infidels. An activist friend from Misyaf, a mixed town which includes Alawis and Ismailis, will no longer cross into rebel-held east Aleppo. He's seeking a fake ID, which will give his place of birth as Aleppo. "If they see my real ID, they'll probably kill me," he said.

They also have an animosity toward reporters and, as reported by Al-Monitor, civil opposition activists, whom they often harass or arrest and charge with the crime of “calling for a secular state.” They recently detained two correspondents in Atareb working for a well-known opposition satellite channel called Orient, stating they would only exchange them for the owner of the station, an exiled Syrian businessman called Ghassan Aboud, after the channel ran programs attacking ISIS.

But not all the reception to ISIS is negative. While known for their harsh measures, the Taliban-like radicals don't steal or loot private property, unlike other rebel groups. They also maintain law and order amid the widespread crime and chaos of the liberated areas, albeit in an extremely strict and violent manner. They also provide aid and basic services for free, which has gained them a lot of support in the poorest and most-deprived areas.

Abu Nayef is a commander of a group of ISIS fighters based in Aleppo’s old city in the ancient neighborhood of Arleq just outside the citadel. A native of Aleppo from the Jdeydeh area, he spent years imprisoned by the regime in the notorious Saydnaya prison.

Abu Nayef and his men have repeatedly clashed with other rebel groups as he refused to allow them to steal offices, shops and warehouses in the parts of the old city under his control. He went so far as to remove safes from businesses, seal them with wax and write on them the owner’s name or the address where they were taken from in order to be able to return them later. He also gets his men to organize deliveries of bread to residents there, often distributing it for free. They coordinate basic public services like trash removal, maintenance of roads and power lines with local community leaders. As far as I can tell, the people of that area are quite happy with Abu Nayef and his ISIS brigade, regardless of their ideology.

Edward Dark is a pseudonym for a Syrian currently residing in Aleppo.