US Secretary of State John Kerry will try to persuade the kingdom to be part of the solution to the crisis in Syria. 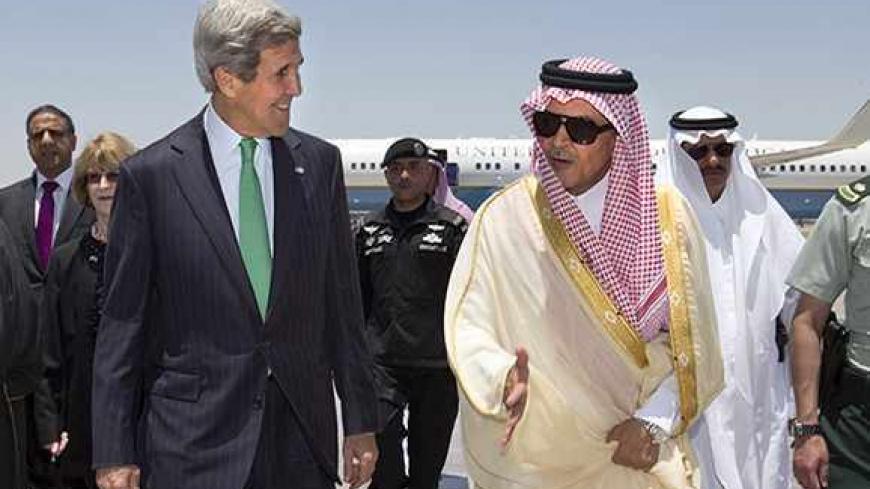 On his visit to Riyadh, John Kerry, the US secretary of state, will encounter a strategic partner that has become too bewildered by the changing Arab world.

A chorus of important princely Saudi voices have already been heard before the visit, pointing to disappointment amounting to anger over the failure of the United States to act in Syria and promising serious shifts in the Saudi-US partnership. The two Al-Faisal brothers, Saud and Turki, in addition to Bandar bin Sultan, have left no doubt that Saudi Arabia is distressed by recent US policies vis-à-vis Syria and Iran.

Over the last decade, Saudi Arabia struggled to reassure its own people and the international community that it still matters, not only for its oil, but also for its claims to lead the Arab world. Away from both rhetoric and wishful thinking, Saudi realities are today very different from what they used to be in the 1970s, when for a brief moment King Faisal had the potential to play a leading role. Yet Saudi Arabia today is far from that fleeting historical moment. Saudi Arabia consolidated its partnership with the West in the shadow of the Cold War. But as that war gave way to more complex political outcomes, the West’s reliance on Saudi Arabia was withering, regardless of how important Saudi resources are. Saudi Arabia was previously thought of as part of any solutions that deal with the region’s many problems, but now it may have actually become part of the problems facing the Arab region after its stumbling uprisings. The Saudis struggle today to reassert their position for many reasons.

First, Saudi Arabia today lacks charismatic and energetic leadership capable of energizing not only its domestic politics, but also foreign relations. Internally, the Saudi monarchy is at a standstill, refusing to acknowledge that it is out of touch with the serious changes that swept the Arab world over the last three years. The leadership is still relying on old strategies to keep the winds of change away from the Arabian desert. It resorts to a combination of carrots and sticks, with the latter often becoming easily deployed in an attempt to stifle debate and intimidate courageous activists.

This leadership still thinks that change can only come from above, with society remaining at the receiving end of royal largesse and initiative. It cannot comprehend that it rules over a different generation engaged with current affairs and aspiring toward real participation in decision-making. When most of the senior leadership is above the age of 80, there is a serious generation gap difficult to bridge with paternalism and the promise of subsidies. The leadership has only succeeded in keeping a lid on the implosion as a result of the ongoing instabilities in neighboring countries.

Saudis are meant to learn a lesson that equates political change with chaos, death and turmoil. As long as this instability continues, the leadership can rest assured that nobody will rock the boat. Then Saudis must watch those imaginary enemies, first Iran, then the Muslim Brotherhood, with their secret cells that allegedly plot to destabilize the country. If that’s not enough, there are always those conspiracy theories that circulate about an omnipotent superpower clandestinely planning the partition of Saudi Arabia. Consequently, Saudis are regularly injected with a fair dose of fear and apprehension about their future, to the extent that they do not even think about change. Ruling by fear of an unknown future and multiple alleged enemies in a turbulent region guarantees that society remains acquiescent.

Externally, Saudi Arabia has failed to recognize its limited capacities when dealing with regional issues from the occupation of Iraq to the recent Syrian crisis. As it has inflated its role in the region and sold propaganda about this role to its own constituency, any setback is immediately considered as threatening its stature. Saudis have been sold a good amount of propaganda about their government’s commitment not only to Arab causes, but also those of the Muslim world. Statistics about its overseas spending on these causes make big news, but not recently.

While in the past Saudis took for granted that their government should help Arabs and Muslims, more recently they have begun to resent this charity. The more they experience duress in meeting basic needs, the more they question the logic of dedicating a considerable amount of wealth to helping others. Why should new housing complexes be built in neighboring countries as gifts from the Saudi government while more than 70% of Saudis do not own a house? Such legitimate questions have been suppressed in the past but now ordinary citizens often ask them. Saudis are more inclined to question their government’s logic in pursuing charitable projects abroad as they become more aware of their own unmet needs. They have also learned the hard way that patronizing the Arabs has not always pacified them or turned them into straightforward clients.

Second, the Saudi government has failed to be flexible in its dealing with challenges both at home and abroad. A conservative monarchy with multiple aging heads is not a good starting point for flexibility. Since King Abdullah came to power in 2005, the image of the reformist monarch as a humanitarian father has collided with the reality of slow reform, corruption and increasing repression. Abdullah is truly sidelined as an arbiter of Saudi internal politics, which remains the prerogative of the Ministry of Interior, headed by Prince Muhammad bin Nayef, and its many bureaucratic branches. The king’s son, Mutaib, may continue to play the game and keep the myth of reform going, but contradictions in the system are already obvious. So Abdullah empowers women and appoints them to the consultative council while the Ministry of Interior curbs their campaign to drive and arrests male supporters of the campaign. Abdullah initiated the national dialogue forum amidst the euphoria of reform, which has evaporated with time.

Abdullah also saw no harm in mixing between the sexes in newly founded universities, but the Ministry of Interior, through religious police in search of immorality, continues to harass both men and women. Such contradictions are symptomatic of a Saudi leadership divided on reform and, in fact, short of formulating a comprehensive reformist agenda. The introduction of minimalist social reforms collides with the stagnation of the political system; hence contradictions are bound to be symptomatic of the old style of government.

The same inflexibility is a characteristic of the way the Saudi government conducts its foreign policy. In today’s world there seems to be no room for eternal enemies or friends. Even allies seem to fall out over covert intrigues and spying. Saudi Arabia has been accustomed to see the world in black and white, but it should develop its skills to deal with gray areas. If John Kerry has a chance to succeed in his visit to Riyadh, he must point to the Saudi leadership that the old inflexibility at both the domestic and regional levels threatens to perpetuate the Arab region’s descent into more chaos, not to mention Saudi Arabia itself.

Because Saudi Arabia has no choice but to listen to the power that guarantees its security, I do not think Kerry’s task should be impossible. With the prospect of the United States reaching out to other regional powers such as Iran, Saudi Arabia should not miss the opportunity to be part of the solution rather than part of the problem.