Though Saudi Arabia and Turkey share strategic goals in the region, the Egyptian coup is testing the strength of the two countries' relations. 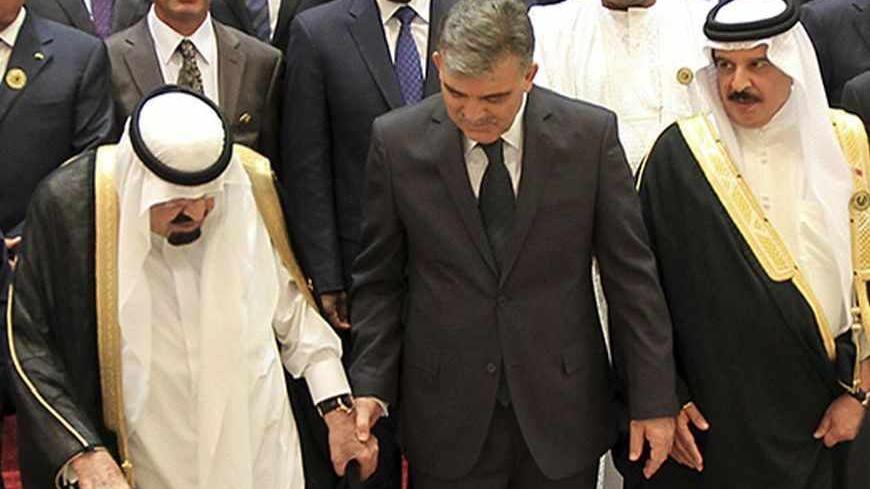 After a lengthy historical impasse, common strategic, regional and economic interests brought about an unusual partnership between Saudi Arabia and Turkey. Relations were strengthening under the pressure of the Arab uprisings, in which both countries were destined to coordinate their support for the Syrian rebels and counterbalance Iran’s expansion in the region. Yet, in the wake of the Egyptian coup, this partnership appears to be strained as the two countries’ visions collided over the overthrow of Egyptian President Mohammed Morsi.

The Turkish leadership made clear its objections to deposing an Islamist leader with whom it had close ideological affinities. Prime Minister Recep Tayyip Erdogan called on the UN Security Council to meet after the massacre of Egyptian protesters, and reprimanded Europe for remaining silent. In July, it was reported that he was puzzled by Saudi backing of the coup and rhetorically asked Saudi Foreign Minister Saud al-Faisal, “How could a country claiming to uphold Islam and Sharia support the overthrow of an elected Islamist president who came to power after fair elections?”

After this most recent episode, it seems that Erdogan will not be endearing Foreign Minister Saud al-Faisal again as he did when the UN General Assembly voted to grant Palestine the status of non-member observer state in 2012. Yet, it is not clear whether this current impasse will have long-lasting negative consequences for cooperation between the two countries. Saudi Arabia needs Turkey in Syria, while Turkey remains eager to attract more Saudi investment, estimated at more than $1.9 billion.

Since June 30, Turkish pro-government media excelled in reporting on Saudi and Gulf support for the coup, calling it the “collaborators’ evil alliance,” with sensational stories circulating in the press about an alleged statement by Dubai Sheikh Maktoum’s daughter, Mahra, in which she stated, “The massacre in Egypt is done by our money.” The Turkish press' criticism of the Saudi position in Egypt — this time originating with pro-Turkish government sources — replicated what had already been noticeable in the secular or independent press. Turkey is one country in the region where Islamists, secularists, leftists and liberals all concur on a negative image of Saudi Arabia, with each doubting its policies. Perhaps this is only replicated in post-revolution Tunisia. While Saudi Arabia has succeeded in creating loyal constituencies in many countries, somehow it has failed to endear itself to others, including Turkey.

On the Saudi side, while the Turkish-Saudi partnership is officially celebrated as a great new strategic alliance, the Saudi press occasionally launches attacks that undermine this veneer of cooperation. Accusations that “Sultan Erdogan” longs for the return of the Ottoman caliphate regularly appeared in the Saudi sponsored pan-Arab press. Such attacks are often backed by appeals to Arabism and the historical animosity between Turkey and the Arab people.

More ferocious attacks are clothed in religion, with Turkey’s Islamism mocked as an aberration that remains tolerant of alcohol consumption and debauchery in the red light districts of Istanbul. Turkey’s Sufi tradition stands at the opposite end of the dominant Saudi Salafist religious outlook. Its half-hearted appeal to Sharia is contrasted with Saudi commitment to Islamic law. Such attacks echo similar ones that flourished more than a hundred years ago when Wahhabi expansion in Arabia and constant harassment of pilgrimages prompted the Ottoman sultan to reassert his authority over the holy cities of Mecca and Medina. Ironically, in 1818 he relied on the Egyptian army under the leadership of Ibrahim Pasha to rid him of this menace and deliver the Saudi rulers and their religious aides to Istanbul where they were executed. While this is history, the memory seems to linger in the minds of religiously-inclined Saudis when they denounce Turkey's version of Islam for its laxity.

When the Arab uprisings broke out, the Saudi press dismissed any prospect for importing the so-called Turkish model, which combines moderate Islamism with democracy and economic prosperity. Such an import was difficult since it collides with structural differences between most Arab countries and Turkey. A long time ago, Arab countries had lost the Turkish cosmopolitanism that came with empire. They also lacked the constitutionalism of the Turkish state, and their Islamists differed considerably from those that emerged in Turkey. The Saudis felt threatened by simply invoking it as a future development that would no doubt expose their own model. When you take oil out of the equation, it is unlikely to find a sensible country that would aspire to a Saudi model of governance.

More recently, a Saudi journalist wrote a scathing article for al-Riyadh newspaper on the Muslim Brotherhood and the so-called “Erdoganism” which prompted the Turkish ambassador in Riyadh, Ahmad Gun, to send a reply, also published in the same newspaper. He stated that the article was aggressive and unfair. He praised the close cooperation between the two states, and clarified the positive heritage of the Ottoman Empire. This common Ottoman heritage belongs to all Muslims, according to the ambassador. A civil democratic state in Egypt drawing its legitimacy from constitutionalism is what Turkey wishes for Egyptians, he wrote.

Low intensity media warfare is likely to continue between Saudi Arabia and Turkey while the two leaderships struggle to keep the veneer of partnership. They may appear as strange bedfellows, but in politics, sleeping with the enemy is too common. Both countries need each other in hot spots further away from Egypt, mainly in Syria where more than three years after the outbreak of its revolution, there seems to be no end to the mayhem. Turkey will be more than happy for the Saudis to pay the bill while it deals with the more complicated logistics. As Saudi Arabia desperately awaits victory in Syria to add to its recent one in Egypt, it may well tolerate Turkish press ramblings.

If the current rift over Egypt continues to linger between the two countries, it will impede cooperation and prolong the disaster in Syria. Turkey and Saudi Arabia may back different horses, but at the end, neither country will be able to create replicas in their own image or loyal forces on the ground. In an age of shifting political alliances, people’s power and changing Arab publics, a lesson has been learned. Arabs, political parties and activists have defied any prediction and will likely continue to do so in the foreseeable future.