Saudi Arabia has a vested interest in the Muslim Brotherhood’s failure in Egypt and the message it sends to sympathetic audiences in the region. 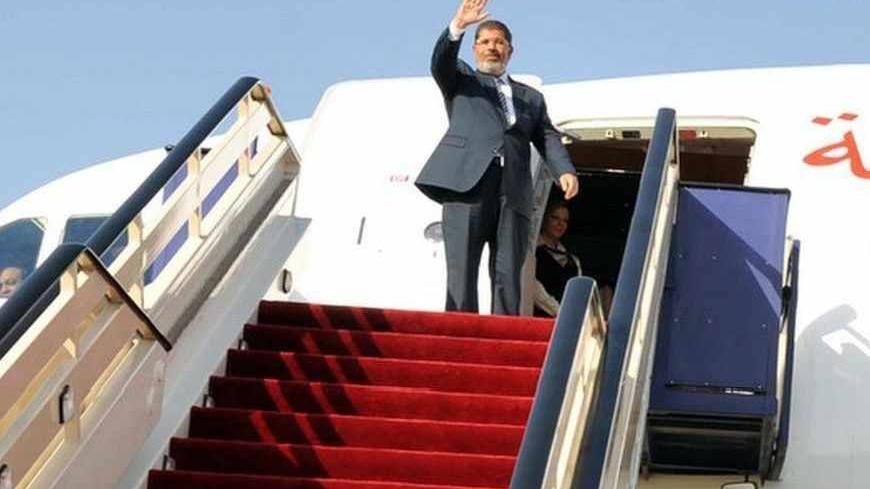 Egypt's President Mohammed Morsi waves at the end of his visit to the Mosque of Prophet Muhammad in Medina, July 12, 2012. - REUTERS/Saudi Press Agency

Hours after the Muslim Brotherhood president of Egypt, Mohammed Morsi, was deposed, the Saudi regime hurried to congratulate newly appointed interim president Adly Mansour. The Saudis must have felt comfortable with the quick downfall of a political Islamist party that found itself in power after several decades in the opposition.

It is ironic that a regime that prides itself on ruling according to divine law fears most the rise of Islamism to power. It must be said that like most Western governments, Saudi Arabia was more than confortable coexisting with the Egyptian military dictatorship under deposed President Hosni Mubarak. But when a democratically elected Muslim Brotherhood president was sworn into office in 2012, Riyadh was alarmed. Saudi Arabia had always had a troubled relationship with the Muslim Brotherhood version of Islamism, its organizational capacity and its increasingly accepted message that combined Islam with an eagerness to engage with the democratic process.

Saudi Arabia hosted Arab Muslim Brotherhood exiles during the repression of the 1950 and 1960s. They came not only from Egypt but also from Syria, Iraq and other Arab countries where they had been prosecuted. Brotherhood cadres played a pivotal role in Saudi educational institutions and later the transnational organizations set up by King Faisal to counter the spread of Arab nationalism and leftist movements. Saudis used the exiled Islamists as tools to weaken such movements and undermine their credibility, while emphasizing their un-Islamic character. During the anti-Soviet jihad in the 1980s, Saudis used the worldwide networks established by the Brotherhood to inflame the imagination of its youth and channel aid and weapons. Yet Saudi Arabia never allowed the Brotherhood to establish branches there as they did in other Arab countries and in the West.

Educated urban Saudis were attracted to the Brotherhood discourse and impressed by its ability to form civil society organizations, posing as charitable and welfare services. Individuals frustrated with the Wahhabi-Salafist tradition that forbids political action and unconditionally obeys rulers, found in the Brotherhood an authentic discourse capable of mobilizing society. The ideological vacuum that resulted from the death of Arab nationalism and socialism after 1967 was quickly filled by political Islam.

To counter the appeal of the Muslim Brotherhood, the Saudi religious establishment condemned it as a divisive force and accused it of undermining people’s creeds. Saudi Arabia began to curb the activities of the Brotherhood after the latter condemned the Saudis for inviting foreign troops to expel then-Iraqi president Saddam Hussein from Kuwait in 1990.

After 9/11, suspicion of the Brotherhood evolved into outright hostility. Prince Nayif accused the Brotherhood of radicalizing Saudi youth and held it responsible for the terrorism wave that swept the country from 2003 to 2008. Such accusations were unfounded, as most jihadis operating in Saudi Arabia grounded their actions in the teachings of Muhammad ibn Abd al-Wahhab, the 18th-century preacher whose tradition has been dominant in Saudi Arabia up to the present.

Saudi hostility to the Brotherhood goes beyond allegations of terrorism. It is grounded in several factors that make it impossible for the regime to coexist with the Brotherhood as a party in opposition or in power.

First, the Saudi regime fears ideological competition from a political party that upholds Islam. The regime prides itself on being the only one that rules according to Sharia. It has propagated this myth for several decades and thus distinguished itself from so-called secular Arab dictators. Its religious establishment seriously believes that its political leadership is the only one that respects Islam. The Muslim Brotherhood in power in the most populous Arab country undermines the Saudi monopoly on Islamic politics.

Second, unlike official Saudi Salafists, who still believe that democracy is a Western import that promises to bring atheists, secularists and leftists to power, the Brotherhood engaged in elections, won seats in parliaments and even came to power in Tunisia and Egypt. Surely, then, Islam and democracy are not so incompatible. This in itself threatens the foundations of Saudi rule, which is still based on absolute kingship, difficult to justify from an Islamic point of view. The Brotherhood therefore exposes Saudi claims to legitimacy and undermines their credibility as lawful Muslim rulers. The Saudi regime worries about its population being contaminated by ideas and practices of how a Muslim can be democratic while remaining within the fold of Islam. This is not to say that a socially conservative Islamist trend like the Brotherhood is a bastion of liberty and democracy, but the Brotherhood's willingness to engage with democratic institutions is enough to scare the Saudi regime.

Third, like the Saudi regime, the Muslim Brotherhood is a transnational organization with branches across the Arab and Muslim world. It has penetrated educational institutions, preaching forums and relief organizations, which the Saudi government has been eager to control and dominate for its own foreign policy and legitimacy abroad. While the Brotherhood does not have the economic resources of Saudi Arabia, it has nevertheless spread across the globe, sometimes in disguise. The Saudis worry about the impact of this global competition among Muslims worldwide, who may become galvanized against Saudi policies. The competition over the hearts and minds of Muslims in the growing global Muslim society worries Saudi Arabia, which seeks to monopolize these platforms.

Fourth, Saudi Arabia prides itself on representing Sunni Islam against its alleged enemies, mainly other sects such as the Shiites. When the Brotherhood called for Islamic unity before it came to power in Egypt, thus softening the Sunni-Shiite divide, the Saudi regime felt undermined by such slogans. When Morsi visited Iran in 2012, Saudi attacks on the rapprochement reached a high tone. He tried to redeem himself when he denounced Alawite President Bashar al-Assad of Syria, but the damage had already been done. Saudi Arabia feared that Morsi would make Egypt drift toward Iran, with whom Saudi Arabia competes for hegemony at the regional level.

Saudi Arabia definitely wanted to see in Egypt a president who would continue to warn against the Shiite crescent, like Mubarak, and unable to break away from Saudi patronage. The Muslim Brotherhood had already drifted toward Qatar rather than Iran, thus allowing this small but wealthy Gulf country to undermine Saudi designs for the region and split the Gulf Cooperation Council (GCC) countries over the desired outcome of the Arab uprisings. The Muslim Brotherhood is seen by the Saudis as an untrustworthy and ungrateful organization that is now too close to Saudi borders, which may allow it to not only spread its ideology among Saudis but also recruit them upon visits to Qatar, where a network of Muslim Brotherhood-friendly intellectual forums, media platforms and think tanks have been established.

The failure of the Muslim Brotherhood to hold on to power for a year is now celebrated in the official Saudi press. So-called liberal journalists congratulate the Egyptian people on getting rid of the so-called religious dictatorship while forgetting their own plight under a regime that was equally if not more oppressive. In contrast, Saudi Islamists spread the rumor that Saudi Arabia, together with the United Arab Emirates, was behind Morsi's fall. While there may be some truth to this, such rumors undermine the Egyptian crowds that assembled to press for his downfall. If the outcome so far pleases the Saudi regime, it should not obscure the fact that Egypt remains diverse, volatile and may not unquestionably succumb to the rule of Islamists or other governments eager to patronize them. The Egyptian crowds got rid of their Islamists and will not become clients of the Saudi regime. They have staged two revolutions so far and will continue to do so until they reach a post-revolutionary equilibrium in which all are politically represented.

Saudi Arabia had a vested interest in seeing a rival Islamist party fail, sending a strong message to the local constituency sympathetic to the cause of the Muslim Brotherhood. It may take time before the message is forgotten, but today, it is a moment of joy for the Saudi regime.