Saudi fears of a democratic Egypt are deferred as long as Egypt is crippled by post-revolutionary turmoil. 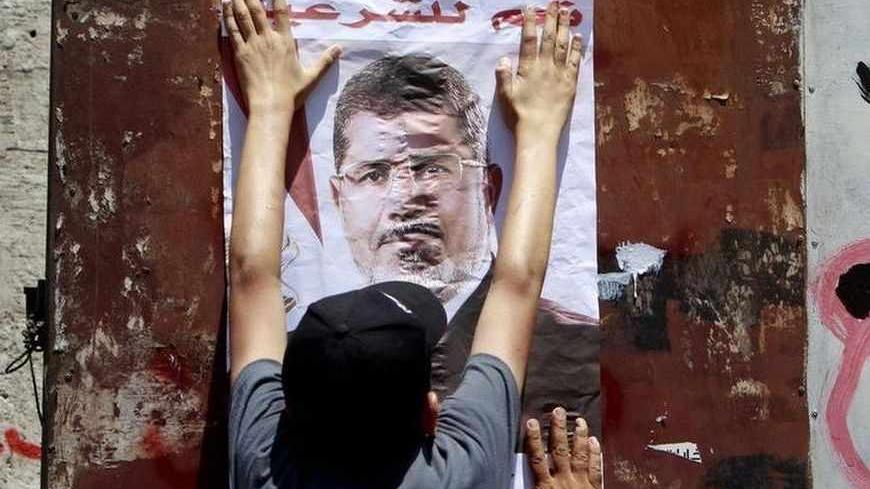 A supporter of deposed Egyptian President Mohammed Morsi hangs a poster of him on a wall during a march from the Al-Fath Mosque to the Defense Ministry, in Cairo, July 30, 2013. - REUTERS/Mohamed Abd El Ghany

The Egyptian crisis continues to divide Saudi society after its elected president, Mohammed Morsi, was deposed by the military on June 30. While the Saudi government made it clear that it supported the coup and rewarded Egypt with $5 billion, a disenfranchised society had different views on foreign policy. Three trends are discernible: One put its weight behind the Muslim Brotherhood, one sided with the government decision and one showed caution in celebrating the end of a short-lived democratic experiment. However, all were equally passionate about the crisis. Their heated passions may not have been about Egypt. To a large extent, Saudi responses clearly reflected a growing tension and polarization in Saudi Arabia itself.

A Saudi Muslim Brotherhood constituency remains unrecognized in formal societies or political parties since those are banned in Saudi Arabia. Yet, religious scholars and lay activists known to be affiliated with the Muslim Brotherhood and its discourse were quick to condemn the coup in Egypt and their own government’s lavish financial support offered only hours after the Egyptian coup. Veteran Islamists quickly organized an online petition to gather signatures in support of the Egyptian president and condemned the killing of more than 100 Egyptian protesters. The Saudi government called in the organizers of the petition for interrogation and banned a couple of television shows on Islamist television channels. Saudi foreign policy is too important to be questioned by activists.

Deprived of any channel for formal debate in the public sphere, Saudi activists sought refuge in the virtual world to launch attacks on their own government and several other groups. They condemned the Egyptian Nour party, which supported the Egyptian coup, because it was considered an extension of the local Saudi Salafis, opposed to the Muslim Brotherhood activism. They also launched attacks on Saudi writers in the official Saudi media who celebrated the demise of Morsi. The battles of Rabia al-Adawiya where pro-Morsi supporters gathered were juxtaposed on an equally bloody yet virtual Saudi terrain.

While Saudi Islamists continue to demand the return of Morsi to power, many so-called Saudi liberal writers concentrated their efforts on celebrating the end of Islamist politics not only in Egypt but in their own society. Demonizing the Muslim Brotherhood, magnifying their mistakes in power and writing premature obituaries of political Islam became regular features of Saudi print, visual and virtual media, all in support of the official Saudi foreign policy. It was clear that an official green light was given to end any kind of tolerance for Islamist politics. Most of these attacks reflect local politics where the euphoria of Saudi Islamists had to be curbed following the success of Islamists in Egypt and Tunisia. The demise of Islamists in Egypt was seen as a great victory that had to be replicated at home.

Yet a third Saudi group was cautious. It consisted of a small elite disenchanted with Muslim Brotherhood practices in power but sympathetic to their ideological position. They praised democracy as a framework for government, warned against military intervention in the political process and condemned the shooting of protesters in Egypt without taking an obvious position in support of the Muslim Brotherhood. However, the message of this small group of elite writers was lost amid the passionate verbal battles between Saudi pro-Morsi activists and their opponents. The Egyptian crisis left Saudis divided with no neutral ground to occupy.

Saudi engagement with what is going on in Egypt is not new, for Egypt has always inflamed Arab imagination beyond its borders. In the 20th century, it has produced three trends that influenced not only Saudi Arabia but the rest of the Arab world. First, modernity — with its arguments and debates, not to mention its popular culture —  spread from Egypt to the rest of the region, with Saudi Arabia receiving its share of this early 20th-century development. Second, with Gamal Abdel Nasser, Arab nationalism came to Saudi Arabia from Egypt and recruited supporters, among whom were well-known royalty such as Talal ibn Abdul Aziz and his Free Princes movement. Arab nationalism’s anti-imperialist jargon inflamed the imagination of a local population, especially that in the Hijaz and the oil-rich Eastern Province, still adhering to primordial identities and trying to find its place in a new world. Finally, the latest of the Egyptian trends was Islamism, which inspired a new generation of Saudis who were struggling to find a language of opposition that combines Islamic authenticity with mobilization, the latter being forbidden under local Salafist religious discourse.

While Saudis never ceased to be inspired by Egyptian intellectual and political exports, their government endeavored to eliminate the spread of alien ideas and their consequences. Its religious scholars dubbed modernity a form of blasphemy that leads to secularism, doubt and loss of Muslim identity. The government initially used Islamism to fight Nasser’s Arab nationalism, considered a remnant of the pre-Islamic age of ignorance whereby celebrating Arabism undermines the unity of Muslims. The Saudi government reached an amicable relation with Egypt only after Anwar al-Sadat came to power but felt compelled to boycott him after the 1979 Camp David Agreement. Under Mubarak, harmonious but occasionally tense relations with Egypt were maintained against a whole range of enemies, Iran being one of them.

Saudi Arabia is putting its full weight behind the Egyptian military coup that promises to end all Islamist politics and relieve Saudi Arabia of the menace of one of its most popular Islamist movements. A blow to the Egyptian Muslim Brotherhood organization is believed to undermine all affiliate branches, destroy their popularity and, most important, end the era of Islamism across the Arab world. While awaiting the final death of Islamism, Saudi Arabia also has at its disposal a local Salafist trend that abhors the Muslim Brotherhood, considered a competitive, divisive and dangerous trend. The Muslim Brotherhood undermines Salafist monopoly over the religious and political scene, not to mention educational and social institutions.

Yet, the real danger to Saudi Arabia is not the multiple isms Egypt has previously exported. In fact, a stable democratic Egypt will be the ultimate threat that will reverberate across the region and set a precedent that many Saudis will carefully observe.

As long as Egypt is crippled by post-revolutionary turmoil, Saudi Arabia can rest assured that it will never become a source of inspiration. A prolonged military dictatorship ensures that the Saudis remain fearful of revolutionary action and its consequences, hence the government’s determination to continue supporting military rule in Egypt. A democratic Egypt will be hard to co-opt or contain. Rather than dividing Saudi opinion, Egypt may then unify them.