Politics and profit mix with spirituality during the annual pilgrimage to Mecca. 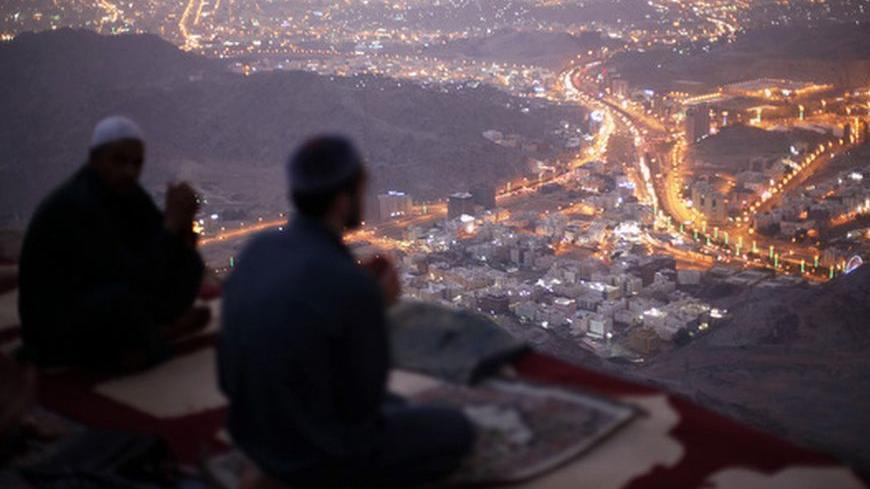 More than 2 million pilgrims are visiting Mecca in Saudi Arabia for the annual pilgrimage season that will culminate in celebrating Eid. This mass ritual has always been tightly controlled for fear of it turning into a political rally. The Saudi authorities insist that pilgrims only chant religious supplication, perform the elaborate stages of the journey and return home thanking the Saudi leadership for providing security, comfort, transport and health care. From the Saudi authorities' point view, any political slogans, especially those that denounce Saudi policies, are seen as an aberration and a security concern.

Any accidents resulting from overcrowding are bound to undermine Saudi legitimacy that unfold during this season. After all, the Saudi king adopts the title "Servant of the Two Holy Mosques," Mecca and Medina. This service, however, is not only for religious reasons, as the pilgrimage season is also a time for politics and profiteering.

The Saudi leadership was keen to extend its control over the holy cities in the West of the Arabian Peninsula for two main reasons.

First, political legitimacy was crucial, as those who control the holy cities have always claimed to represent Muslims, or at least the Sunnis among them. Mecca was and continues to be the jewel in the Arab crown. Without it, the Saudi leadership would be just one regional power among many others. Yet Mecca was not destined to be the seat of power, and the Saudis preferred to keep it as a religious cornerstone while the court remained in Riyadh, the strong base of the Al-Saudi rule.

Once Mecca became integrated in the Saudi territories, the leadership rushed to assure Muslims around the world that it will do its best to allow the the pilgrims regulated access and provide services during the crowded events. Provided that pilgrims behave according to the rules, and do not plan to stay, the Saudis are willing to welcome them. Those who deviate are often not granted pilgrimage visas or are arrested. This year, the Saudi authorities continue to announce discoveries of unauthorized pilgrims, who are prevented from performing the ritual. Just before the pilgrimage season, Kuwaiti preacher Tariq al-Swaidan, known to be close to the Muslim Brotherhood, was denied entry to perform the minor pilgrimage known as Umra. Previously, Rachid Ghannouchi, current Tunisian Ennahda Party leader, was denied access to Mecca and returned to London due to his critical views on Saudi policies. The pilgrimage seems to be only for those Muslims who do not openly challenge Saudi authority.

Access to Mecca is subject to a strict visa-application process, the purpose of which is to eliminate potential troublemakers such as Iranian pilgrims who have in the past defied Saudi rules and regulations and turned their Islamic journey into political rallies, cursing the United States and their allies among Muslims, including the Saudi leadership. The Mosque minaret can be a platform for praising the Saudis, but cannot be hijacked by those who denounce them, so the ban on politicizing the pilgrimage season is partial. The season can be a platform for the Saudis to boast about their services to Muslims, but not an occasion to question their policies. The leadership relies on religious opinions by its own scholars that are often circulated before the event, calling upon Muslims to refrain from any political acts. Saudi religious scholars always warn against turning the pilgrimage into a rally that may lead to clashes. While many Muslims abide by these conditions, a small minority is always ready to defy the Saudi ban on politics, inviting serious confrontations with the Saudi security forces deployed during the season.

So far this year, such clashes have not been reported. Perhaps this is due to Iranian pilgrims taming their enthusiasm and defiance, unlike immediately after the Iranian revolution in 1979, when serious clashes with the Saudi police occurred. With Iran being gradually rehabilitated into the international community and the increasing isolation of its rivals and arch-enemies like the Saudis, it is doubtful whether the pilgrimage will be used at this time as a chance to raise political slogans. It seems that diplomacy has replaced the populist politics of the Iranian regime that in the past have led to clashes with Saudi security.

Second, in the pre-oil era, the pilgrimage season was a great source of revenue not only for the inhabitants of Mecca but also the political powers that controlled it. The importance of this income to the Saudi economy declined with the discovery of oil, but local communities still await this annual event to profit from the services they provide, such as accommodation, transport, food and the sale of religious souvenirs. Princes who have invested in real estate and transformed the landscape of Mecca by erecting tall, five-star hotels make a colossal profits from rich visitors, while small investors provide services for less wealthy pilgrims.

Under Saudi rule, the pilgrimage became an opportunity to make money. Profits flow from the hypermodern services provided, from speedy trains to transport the pilgrims and closed-circuit TV cameras to watch pilgrims, to fast-food meals. Thus the Saudis have crossed the divide between the sacred and the profane, which the pilgrimage season is meant to keep separate. A sacred journey can only take place in a "profane" world, where making money from land development and services is a great opportunity to keep the local economy flourishing. The Saudis boast about the cost of the pilgrimage that consumes millions of their own oil revenues to demonstrate their commitment to providing the latest services for their guests. But the pilgrimage has become the most profitable religious tourism industry in in Saudi Arabia, while other attractions have failed to attract a significant number of visitors, despite the government’s promotion of internal tourism.

This local economy reproduces all the inequalities that the Muslim journey is meant to erase during the event. Muslims are meant to be humble during the pilgrimage and equal in the house of God, symbolically represented by their common dress and ritualized acts. All are meant to walk, except those who are old and disabled. But equality stops at these visual representations, as hierarchies reassert themselves in hotels such as the Raffles Makkah Palace, owned by Saudi tycoon al-Walid bin Talal, or the king’s palace towering high above Mecca, where he watches the pilgrims from above.

The pilgrimage is also meant to assert the unity of all Muslims regardless of their race, gender, ethnicity or sect. It is an embodiment of the universality of Islam against a background of cultural diversity. It is here where Muslims come face-to-face with their counterparts from all over the world. Some may have encountered each other in the virtual world as belonging to one ummah, "community," that has shared beliefs and practices, but only during the pilgrimage season we find that transnational solidarities are truly forged. Yet in the pilgrimage itself, differences quickly become visible. While there is a common sequence of acts that all Muslims should perform during the pilgrimage, cultural and sectarian differences do reassert themselves, to the annoyance of Saudi authorities.

The Saudis have failed to impose uniformity and force Muslims to conceal their sectarian differences, which translate into specific acts regarded by the Saudis as unorthodox. This is often apparent in the way Saudis prohibit Shiite pilgrims from visiting the tombs of ancestors. Saudi orthodoxy considers any tomb visitation blasphemy, and the many religious security officers struggle to drive Shiite pilgrims away from such visits. Other Muslims are often reprimanded by the religious police when praying in ways that do not match the Saudi pattern, while women may be chastised for leaving their faces uncovered, which most Muslim women do during the event. The Saudis also struggle to maintain sex segregation in the sacred precincts, which has nothing to do with Islam but with the Saudi obsession with gender divisions.

Saudi efforts to mold the pilgrimage into its own image and homogenize Muslims is a fruitless effort, as universal religions like Islam flourish only because of their ability to adapt to local culture and traditions. People reach God in ways that reflect their context and environment, and no political authority has been successful in imposing one mode of religiosity on all Muslims across the world. The Saudis must stop harassing pilgrims and coercing them into accepting one way of communicating with God, as this proved to be an impossible task despite the millions spent on preaching and policing pilgrims’ devotion. For the time being, the Saudi authorities can only profit monetarily from the pilgrimage season, and its political legitimacy may in the future rest on shaky ground.

Madawi Al-Rasheed a columnist for Al-Monitor. She is a visiting professor at the Middle East Centre at the London School of Economics and Political Science. She has written extensively about the Arabian Peninsula, Arab migration, globalization, religious trans-nationalism and gender. On Twitter: @MadawiDr