Has the commercialization of the pilgrimage to Mecca overshadowed the Saudi leadership’s goal of serving Muslims? 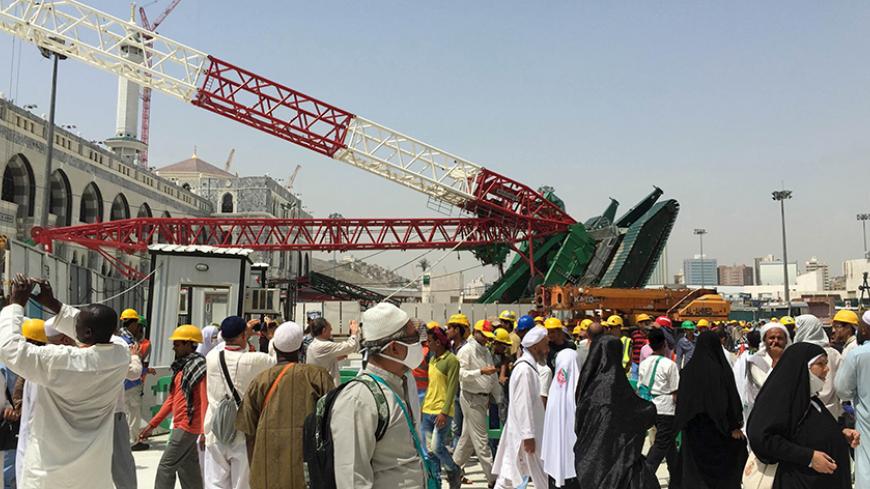 Muslim pilgrims walk near a construction crane that crashed into the Grand Mosque in the Muslim holy city of Mecca, Saudi Arabia, Sept. 12, 2015. At least 107 people were killed when the crane toppled over at Mecca's Grand Mosque on Sept. 11. - REUTERS/Mohamed Al Hwaity

Trouble seems to have found this year’s pilgrimage to Mecca before the season even started. On Sept. 11, a huge crane being used in the ongoing expansion of the Mecca precinct collapsed, killing more than 100 pilgrims and injuring many others. The tragedy was so catastrophic that King Salman bin Abdul-Aziz Al Saud, custodian of the Two Holy Mosques, promised a full investigation and visited the site of the accident and the injured. Like many other accidents in the past, this disaster brought to attention the contested nature of Saudi control over the holiest site of Islam.

The Saudi leadership boasts about its efforts to welcome the pilgrims and expand the area where they can perform their annual ritual, the quality of the health services it offers and, most important, the safety and security of pilgrims.

However, the moment a Muslim decides to make the pilgrimage, he is at the mercy of the commercialization of this religious duty. From visa fees imposed by the Saudi government to transportation and accommodation charges, pilgrims are a source of income to both the Saudi government and service providers. The Saudi government prefers to call pilgrims “guests of God,” but these guests pay a high price. It takes some Muslims a lifetime to save for this important journey; many may never have enough resources to make it. Others can be banned for political reasons.

A Saudi micro-economy has flourished around the annual pilgrimage, but that is often overlooked when the Saudi leadership boasts about its services to pilgrims. From small hotel owners to global chains owned by entrepreneur princes such as Prince Alwaleed bin Talal, revenues from the pilgrimage have always been an important source of income.

The Saudi leadership has also used the pretext of expanding the Mecca site to confiscate land around the precinct, annex property with little compensation and erect imposing buildings such as high-rise royal palaces. The horizontal expansion of the Grand Mosque to allow for more than 2 million visitors has been marred by vertical royal residences and luxury hotels, all beyond the reach of ordinary Muslims, the majority of whom can only afford shelter in specially erected tents.

The commercialization of the pilgrimage — some would say the vulgarization — is compounded by another hot-button issue, namely Saudi control of the sequence of pilgrimage rituals to make them conform to the Wahhabi version. This has remained problematic given the diversity of Muslims, their sects and their folk religious traditions. The Saudi government also prohibits the observance of certain traditions during the pilgrimage season. For example, some pilgrims are not allowed to visit graveyards where the companions of the prophet were buried in Medina, the second holy city, or to chant or use drums. A pilgrim is expected to perform the ritual in a somber way, regardless of his background or religious sect. Shiites in particular have been affected by these restrictions. In the past, clashes were common between them and Saudi police as Shiites tried to visit the tombs of their revered imams.

The inability of Saudi authorities to accommodate religious diversity is not the only contested issue that antagonizes many Muslims. Saudi Arabia does not like politicized gatherings in public places. For example, the government severely punishes anyone calling for demonstrations, which are banned anyway. So the authorities are paranoid about pilgrims who may use the occasion to raise political issues or incite others to act on these issues. In the past, this controversy has brought Saudi Arabia into conflict with Iran, whose pilgrims wanted to turn the religious occasion into a political rally in 1987 during the Iran-Iraq War.

Political conflict between Saudi Arabia and Iran over the last three decades crept into the pilgrimage season, with Saudis constantly warning all Muslims against using the occasion to voice political views. But this year, Saudi Arabia has many other conflicts to worry about that might erupt during the annual pilgrimage. Saudi Arabia has antagonized not only Shiites but other Muslims as a result of its aggressive foreign policy following the Arab uprisings in 2010.

From the Muslim Brotherhood of Egypt and its affiliates around the Arab world who resented Saudi support for military rule in Egypt to Yemenis who have suffered massive civilian deaths after more than six months of Saudi bombing of their cities, Saudi Arabia is no longer the all-encompassing reconciliatory Muslim power that it claims to be. While the growing sectarianism currently sweeping the region cannot be entirely blamed on Saudi political and religious policies, Saudi Arabia has contributed to the increasing polarization, especially between Sunnis and Shiites. Under the pretext of curbing Iranian influence in the Arabian Peninsula, the ongoing Saudi war in Yemen has yet to bring peace to that poor country. In Syria, Saudi support for various rebel groups over the past four years has yielded more controversy than solutions. It has certainly made political solutions a remote possibility and resulted in the exodus of millions of Syrian refugees whom Gulf countries are not prepared to welcome.

There also remains the Islamic State and al-Qaeda, which both openly detest and denounce the Saudi regime and dub it ungodly. Lately, they have been less vocal in their attacks on the regime, possibly as they are content with the Saudi military campaign in Yemen, which is bound to coincide with their own interest to eradicate the Shiites. Predecessors of these contemporary movements used the pilgrimage season to challenge the Saudi regime in 1979, when a group led by Juhayman al-Otaibi and Mohammad al-Qahtani, both militant Saudi radicals, seized the Grand Mosque and held many pilgrims as hostages. Current Saudi jihadis have not attacked the regime or its institutions, but instead have focused their suicide bombings on Shiite places of worship since the beginning of 2015. It remains to be seen whether they will turn their attention to attacking the regime itself.

The Saudis need to be extra vigilant this year to prevent another tragedy — one that might not be attributable to corrupt construction companies or weather conditions. Serving Muslims, as the Saudi leadership claims is its goal, involves greater responsibility to solve urgent political problems rather than fueling schisms and hatred between those Muslims. The partisan politics of the Saudi regime will only further the polarization that unfolds during the most important ritual in Islam, the hajj.