Is Saudi Arabia up to the task of protecting the 'House of God'?

With construction issues at the Grand Mosque and the threat of Islamist militants, the hajj presents a unique challenge to Saudi organizers every year. 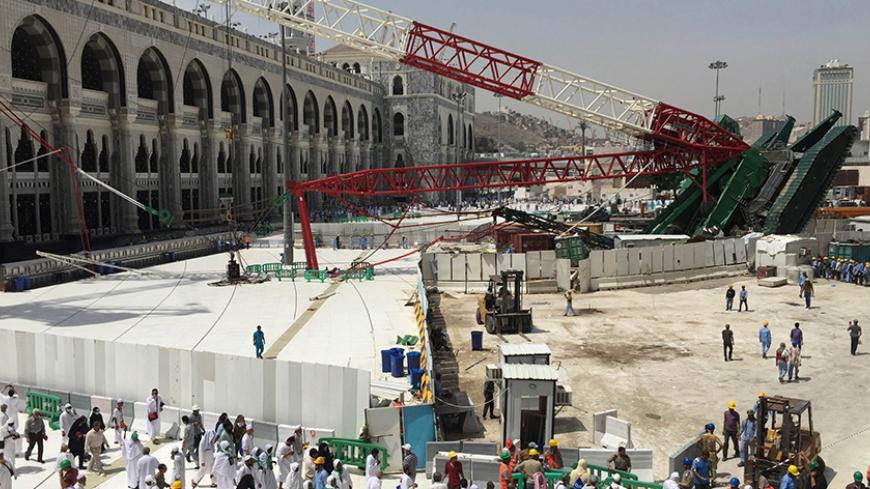 The collapse of a construction crane that killed 107 pilgrims and injured many others at Mecca’s Grand Mosque on Sept. 11 has led some to raise questions about the safety of the estimated 2 million pilgrims who will descend on Islam’s holiest site in less than two weeks to begin the annual rite of hajj.

However, the Saudi leadership — including King Salman bin Abdul-Aziz Al Saud himself — has made it very clear that it considers the custodianship of the two holy mosques in Mecca and Medina to be among its most important responsibilities.

The Saudi government has not only expended billions of dollars in expanding the Grand Mosque to accommodate the ever-increasing number of pilgrims, it has also implemented many measures to ensure that the risk of past tragedies like stampedes and fires, which have resulted in significant loss of life, is greatly reduced. Just as important, the Saudis have drastically increased the presence of security personnel to guard against a serious potential security risk: the so-called Islamic State (IS), which has made it clear that it has no compunction about targeting Muslims in their homes, hospitals, schools and even mosques.

Keeping hundreds of thousands of pilgrims safe and securing the Grand Mosque and its surrounding environs are daunting challenges, but the Saudi government should be given high marks for its continuing efforts to make the hajj as safe and as secure as possible. If the response to the terrible crane accident of last week is any indication, Saudi Arabia may indeed be entering a new age of greater transparency and accountability as it relates to the hajj.

Long before anyone had heard of the terrorist group known as IS — or even al-Qaeda for that matter — Islamist militants laid siege to Islam’s most hallowed ground: the Grand Mosque in Mecca. The notion that Muslims would consider desecrating this holiest of Islamic sanctuaries by spilling Muslim blood is no doubt revolting to all Muslims and unfathomable to most. However, the truth is that dozens of armed extremists who espoused an understanding of Islam that centered on the notion of an imminent apocalypse — not unlike the interpretation that IS adheres to — stormed the Grand Mosque in 1979 and killed dozens of worshipers shortly after the end of the hajj season that year. The siege remains the single most shocking act of terrorism to ever be carried out on Saudi soil.

Unfortunately for Saudi security officials and the 2 million plus pilgrims who will be in Mecca and its environs during the hajj, IS has shown that it does not adhere to any red lines. It would not hesitate to attack the hajj if it could. However, the Saudis have poured billions of dollars on sophisticated surveillance equipment and will have thousands of security personnel in and around Mecca to make sure that IS or any other group is not allowed to disrupt this most sacred of Islamic religious rites. Saudi authorities have been unequivocal in asserting their preparedness to deal with any possible disruptions.

That is not to say that Saudi Arabia has the threat posed by IS completely under control. This most brutal of al-Qaeda offshoots has managed to carry out three suicide operations against mosques inside Saudi Arabia since the beginning of this year. Two of the attacks were against Shiite mosques in the Eastern Province and one was against a mosque used by security forces in the southern region of Asir.

The attacks reminded Saudis that while they have been spared much of the turmoil that has spread across the Middle East since the beginning of the Arab Spring, IS has exploited the security vacuum that has emerged in a number of Arab countries and established a presence in Syria, Iraq and Libya. IS is also trying to establish a foothold in Yemen. While Saudi Arabia cannot be compared to any of these essentially failed states, the hajj presented a unique challenge to Saudi organizers every year, long before IS became a household name. Fires and stampedes over the years have killed hundreds of people, but the Saudi government has gone to great lengths to prevent both by raising awareness about the dangers of fires and flammable materials and building new tunnels and bridges to reduce congestion. The Grand Mosque is currently undergoing its third major expansion.

Muslims who visit the Grand Mosque intermittently to perform the hajj, or the lesser rite of Umrah, have no doubt noticed vast increases in the size of the mosque. While the Saudi government has maintained that its expansion of the mosque and the development of its surrounding areas is solely to accommodate the ever-increasing numbers of pilgrims, some critics have maintained that the various towers and commercial developments in the immediate surrounding areas of the mosque have taken away from the spiritual significance of Mecca.

Although unquestionably tragic, last week’s crane accident seems to have marked a turning point in how Saudi officials respond to accidents in Mecca. Unlike past incidents, the Saudi government confirmed the incident relatively quickly and was forthright about the high number of casualties. The government also ordered an inquiry into the cause of the crane’s collapse within hours of the accident. A mere three days later, preliminary findings were released and confirmed that inclement weather was the immediate cause of the accident. However, the inquiry also found that the company operating the crane, the Binladen Group, had violated laws regulating the use of such cranes. The Binladen Group is the biggest construction company in Saudi Arabia.

A royal decree has also banned senior management from the company from traveling abroad and suspended the company from new contracts. In addition to visiting the site of the wreckage in person, Salman also visited many of the victims of the accident — most of whom were non-Saudis — and ordered monetary compensation of as much as 1 million Saudi riyals ($267,000) be paid to each victim who has suffered permanent disability.