A Turkish parliamentarian calls for a joint Muslim administration in Mecca and Medina, arguing the Saudis have failed to ensure smooth hajj pilgrimage for Muslims. 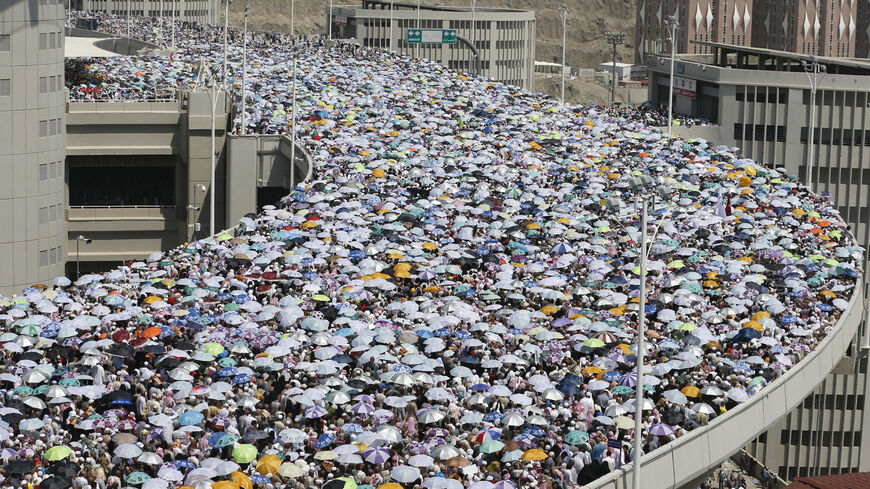 Muslim pilgrims walk on a bridge as they head to cast stones at pillars symbolizing Satan during the annual hajj pilgrimage in Mina near the holy city of Mecca, Oct. 6, 2014. - REUTERS/Muhammad Hamed

The hajj pilgrimage is a religious duty for all Muslims, performed in the holy city of Mecca, which, along with Medina, is part of Saudi Arabia’s Hejaz region. Rifat Sait, a Turkish parliament member from the ruling Justice and Development Party (AKP), was among those who made this year’s pilgrimage in early October. Back home, he made intriguing comments. Sait grumbled that Saudi Arabia failed in municipal services, that Mount Arafat was filthy and that historical monuments were in a bad state. As a solution, he called for a Vatican-like administration of the Hejaz by Muslim countries during the hajj season.

“Hajj pilgrims face serious problems. Cleanness is a fundamental tenet in Islam. But Mount Arafat lacks even proper toilets. Any contagious disease there could affect all pilgrims, who, in turn, would take it to their own countries. Diseases could spread across the world,” Sait said. “Hejaz’s administration cannot be left to the Saudi state alone during the hajj season. The region should be like the Vatican. During the hajj period, it should be under the joint administration of Muslim countries, including Turkey.”

Stressing that historical monuments in the region were in danger, the lawmaker said he would convey his complaints to the Saudi Embassy in Ankara and suggested that UNESCO’s help should be sought to protect the region’s heritage.

A similar Turkish proposal had surfaced in March 2011 in a leaked US cable the daily Taraf unearthed from the WikiLeaks trove and published under the headline “Mecca can become Vatican for $10 million.”

In the cable, dated Aug. 11, 2004, then-US ambassador to Turkey Eric Edelman wrote that Turkish theologian Bedreddin Habiboglu — son of a late Islamic thinker who is said to have had “extraordinary access” to the inner circles of the House of Saud — was planning to launch an effort within the Muslim world to turn Mecca and Medina into an autonomous zone “somewhat similar to an Islamic Vatican,” for which he sought US financial support.

“Habiboglu says he needs $8-$10 million to bring the concept to fruition (for travel to most Organization of the Islamic Cooperation countries and several offices in key countries to lobby and coordinate), and looks to the US [government] for financial support. He estimates the project would take 12-18 months to complete. He is determined to press ahead and says he will propose the idea to others, including the Russians, if we turn it down,” Edelman wrote, before concluding he would say no “unless instructed otherwise.”

How Washington reacted, we don’t know. But former Turkish Justice Minister Hikmet Sami Turk is convinced that a Vatican-like administration for Mecca is a far-fetched idea.

“The church is the world’s most powerful organization. The papacy is run in a strict top-down hierarchical order. In Islam, however, there is no institution akin to the papacy,” Turk told Al-Monitor. “Uniting the Muslim world under one roof is a very difficult task. Even if a decision is reached for a joint administration, who is going to be serving there? You would need elections, which is a difficult task. Every year a Muslim shurah [forum] convenes there, and the idea of an international organization appeals to people. But it is Saudi Arabia’s land.”

Turk, who made the hajj pilgrimage 18 years ago, has his own collection of unpleasant memories, which suggest that little has changed over the years.

Here is how he remembers the trip: “You are [always] in danger of being crushed. I’ve been through this as well. During the stoning of the devil, which is a symbolic ritual supposed to be performed with stones no bigger than hazelnuts, some people believe they are really stoning the devil and throw whatever they get their hands on. I was injured with a stone that hit me in the head. You are not supposed to get shaved for three days during the hajj. You wear the ihram [white unhemmed sheet] which is supposed to have no metal accessory… But in the pandemonium out there, the garment often slides. Some even saw their ihrams drop down. After I was injured in the devil-stoning and then almost had my garment slip off on the first day, I said, ‘I’ve had enough, no more.’ I delegated my colleague Musa Uzunkaya from the Felicity Party to complete the hajj for me. People lie in the streets and inside the mosques there, saying it is Allah’s place. Even most basic needs such as toilet are a problem. All these issues must be resolved.”

Historian Ekrem Bugra Ekinci says the Saudis had originally proposed an international Muslim committee to run the Hejaz after they took the region from the Ottomans. But following the establishment of the Kingdom of Saudi Arabia in 1932, they abandoned the idea, to which only Iran objected. “The lawmaker’s suggestion is appropriate, but the political reality is not favorable,” Ekinci said.

The gaudy construction around Kaaba that flouts the very spirit of the hajj has also come under fire from religious scholars and politicians. Besieged by skyscrapers, the holy Kaaba now looks like an insignificant monument amid the luxury hotels.

The annual global demand for hajj pilgrimages is about 20 million. Once development at the site is completed, Kaaba will be able to accommodate an estimated 5 million people.

The head of Turkey’s Religious Affairs Directorate, Mehmet Gormez, is another person closely concerned with the shortcomings in the Hejaz. “One would have wished that satellite cities were built in the Medina and Jeddah plains and underground metro transport were made available in Mecca from the very beginning [instead of] shrinking worship sites that much and besieging Kaaba with mammoth buildings,” he said in a recent interview.

Contacted by Al-Monitor, Sait stressed he did not mean to interfere in Saudi affairs, but remained adamant in his criticism. “My aim was to raise public awareness, to start a debate on the issue. Muslims are being tormented there. Hygiene is being disregarded. I’m still recovering [from sickness] after the trip,” he said.

“I certainly have no intention to meddle in Saudi Arabia’s internal affairs, but Muslims are having a hard time because of failing services. The local administration should be improved,” he said. “The joint administration of Mecca and Medina by all Muslim countries is an idea that needs to be backed both at home and abroad. I’ve been receiving support on the issue. The Saudis, however, are reluctant.”