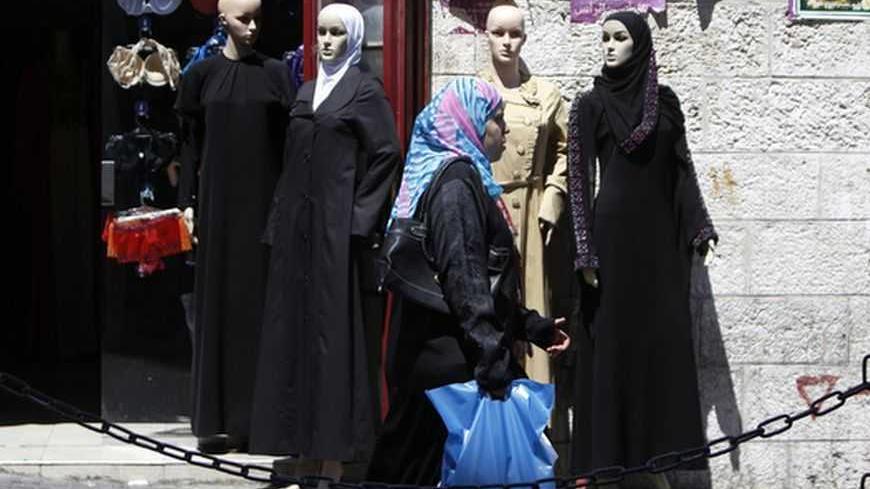 A Palestinian woman walks past a clothing store in the West Bank city of Ramallah, Sept. 4, 2012. - REUTERS/Mohamad Torokman

When Muhammad, who refused to give his family name out of security concerns, asked the DJ at his brother’s wedding in Khan Younis, in the southern Gaza Strip, to play music for slow dancing, the DJ refused on the grounds that he would be punished by the authorities.

Bemused, Muhammad warned the DJ that the family wouldn't continue the wedding if he didn’t play the song. The DJ shrugged off the threat and stood by his refusal.

“We were really angry, because we were never informed that the slow dance wasn’t allowed,” Muhammad said.

When Muhammad sought clarification from the club administrator, he was told that such dances were prohibited for “social concerns” — the dance moves were sexually suggestive and might induce single females to behave inappropriately.

The wedding took place in a hall that was part of a Khan Younis club run by the local municipality, making it a public venue.

Since coming to power in the coastal enclave in 2007, Hamas has been trying to impose stricter Islamic social practices. Its attempts, however, have often been met with stiff resistance from locals, which has pushed the Islamists to reconsider. In previous cases, Hamas has retreated from a decision banning women from smoking shisha in cafes, another obliging female high school students to wear the hijab, and one banning males from working as hairdressers for females.

Attempted Islamization of Gaza made headlines again last week when Al-Aqsa University sought to require female students to wear the jilbab — a long, loose robe that covers the whole body. The university’s decision prompted a fierce response from the Palestinian Authority, which deemed it “illegal.”

The decision exposed a clear divergence between the style of governance of the religious Hamas and secular Fatah. While Hanan Ashrawi, executive member of the Palestinian Liberation Organization, slammed the decision as “Talibani,” Mahmoud al-Jaabari — spokesman in Gaza’s education ministry — praised the move.

“This decision expresses the needs of the Palestinian people," he said, claiming that the families of the students welcomed the decision.

This is not the first time Al-Aqsa University has attempted to impose stricter Islamic etiquette. The university has a history of imposing Islamic attire on female students.

Riham, a 22-year-old university graduate in Gaza, recently graduated from the university. Pleased with her bachelor's degree in broadcast journalism, Riham’s happiness was mixed with regret over her portrait photo on the certificate, in which she appears veiled.

"That was against my will," she said, explaining that the university staff told her that she didn't have the right to show her hair in the picture she submitted for the certificate.

She recalled that student affairs officials rebuked her for trying to defend her right in selecting a photo of her choice for the certificate.

"They told me this is a respectful university and that I was trying to defame its image," she said.

During her four-year course at Al-Aqsa, Riham was forced to wear the hijab inside the campus and in classes, even though she doesn’t cover her hair outside the campus. She doesn't wear it in Gaza or when she visits Syria, where she was born and raised for 12 years.

The decision to impose the jilbab was passed by the university's board of directors, which Hamas appointed. It was in line with a series of initiatives perceived as an effort to impose a stricter Islamic lifestyle on the Gaza’s Palestinian society, which is traditionally conservative.

Riham concedes that the university may have the right to apply its own regulations, but she says that should be made clear to students before they enroll.

"If I knew I would have my picture on my certificate with a veil, I would have enrolled at another university," Riham said.

Not everyone, however, disagrees with the imposition of stricter Islamic law. Maha Abdul Nabi, a 20-year-old female student at Al-Azhar University — where women are free to dress as they choose — said that she wished her university would impose a similar dress code.

“Male students in our university don’t stop gazing at our bodies. This is why I see imposing Islamic dress code as a solution,” Maha explained.

A salesman in Gaza City, who spoke on the condition of anonymity, said several police officers visited his shop and warned him to cease selling lingerie or they would close his shop.

The shopkeeper said the police justified the order by explaining that his shop was located in a narrow side-street off the main shopping street, which “allows disgraceful things to happen between female customers and vendors.”

The Ministry of Religious Affairs launched a "virtue campaign" in January in the Strip's central districts. The campaign targeted low-waist jeans, female abayas that show jeans underneath and veiled women who show the front of their hair beneath their headscarves. Although the campaign was not forceful, it reinforced Hamas’ desire to see stricter social etiquette in Gaza in line with sharia.

Islam Shahwan, spokesperson for Gaza’s interior ministry, said that the police are not involved in the virtue campaign and that the Hamas government "respects personal freedom." However, he added that personal freedoms should be "in harmony with the (Palestinian society's) traditions and customs."

Muhammad, after being informed of the reasons for banning the classic slow dance, scoffed at the move by Gaza’s authorities.

“There are more central religious issues to consider rather than focusing on worthless things,” he said.

Abeer Ayyoub is a former human-rights researcher turned journalist whose work has appeared in Al Masry Al-Youm, The Daily Mirror, and Haaretz.