Hamas' decision to bar women from UNRWA's annual Gaza marathon might have more to do with politics than religion, Abeer Ayyoub reports. 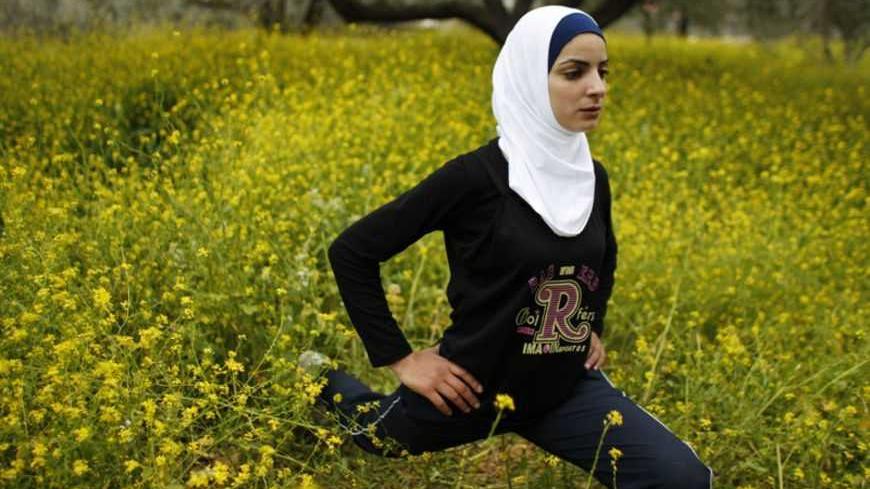 Palestinian runner Worood Maslaha, 20, in typical competition garb, stretches in a field belonging to her family in the West Bank village of Asira Ash-Shamaliya near Nablus, March 27, 2012. - REUTERS/Ammar Awad

Hamas has once again come under fire over its attempted Islamization of Gaza, after the UN Relief and Works Agency (UNRWA) cancelled its annual marathon on Tuesday due to the Islamist rulers' barring women from participating.

UNRWA confirmed in a statement released Tuesday that the "disappointing decision follows discussions with the authorities in Gaza who have insisted that no women should participate.”

In response, the Prime Minister’s office in Gaza sent a text message to reporters expressing sorrow in UNRWA’s decision, while highlighting the need to respect Palestinian “tradition.”

"We confirm for UNRWA that we are with the event, yet with keeping regulations that’s related to the Palestinian people's tradition," the message read.

Adnan Abu Hasna, UNRWA spokesperson in Gaza, defended his agency’s decision to cancel the event, insisting on the need for gender equality.

"As an agency that’s based on gender equality, we totally refused this suggestion (to bar women from the marathon)," Abu Hasna said.

This year's event was designed to raise funds for children in Gaza, in particular the annual summer games program that the agency runs.

“We lost a golden chance not only to highlight the Palestinian cause, but also to fund our programs,” Abu Hasna explained.

The decision also drew a rebuke from Hamas’ rivals in the West Bank. In a statement sent to reporters, Ramallah-based Palestinian Prime Minister Salam Fayyad condemned Hamas's decision as denying Palestinian woman the right of equality provided in Palestinian law.

"Canceling the marathon has wasted an important chance to shed light on our people's suffering in Gaza caused by the Israeli siege," the statement read.

The Gaza-based rights group Al-Mezan called on the Gaza government to remove barriers obstructing the implementation of the third UNRWA marathon in Gaza.

"Al-Mezan strongly condemns the reasons which have led to the cancellation of marathon. In this regard, Article 9 of the Basic Palestinian Law states that Palestinians shall be equal before the law and the judiciary without distinction based on upon race, sex, color, religion, political views or disability," it said.

Hamas issued the ban despite women having participated in the past two UNRWA marathons. The Islamist leadership has previously warned against the UNRWA-run summer games, as it allows gender mixing and teaches girls dancing, which, according to Hamas, violates Palestinian social morals. Hamas has promoted its own Islamic camps as an alternative.

According to the UNRWA spokesperson, more than 2,400 people were to take part in the marathon, including nearly 370 women.

In the previous two races, female runners conformed to Islamic attire, and instead of shorts, women ran in long pants and loose, long-sleeved shirts. Most also had their hair covered. This year, in its registration material, UNRWA advised female participants to do the same.

But this wasn’t enough to avoid a Hamas ruling against female participation. The decision is part of a long effort by Hamas to enforce a strict Islamic code of conduct on an already conservative society.

Hamas has previously attempted to impose an Islamic dress code on high school female students, the hijab on lawyers inside courts, and has also questioned men and women seen out together in public about their relations. The authorities have also sought to ban women from smoking nargileh in public places.

But shortly after its announcement, Hamas has relaxed its imposition of strict Islamic conduct, with none of the above fully enforced in the Gaza Strip.

Some analysts argue that the ban this time was not based on Hamas’ Islamic ideology, but rather motivated by political factors, in particular solidifying its grip on international organizations operating in Gaza.

In August 2011, Hamas banned five teenage students from going to the United States after the US non-profit organization AMIDEAST granted them one-year scholarships. Hamas justified its decision by saying that allowing minors to travel alone violates Palestinian traditions.

Zinab al-Ghunaimi, the head of the non-governmental, Gaza-based Center for Women's Legal Research and Consulting, said she was not surprised by Hamas’ decision, adding that Hamas is using a religious pretext to push a political agenda.

"If Hamas doesn't really want women to mix with men, why does it allow it in its rallies?" she queried.

Female participants expressed anger at the decision, including Riham Ghazali, 22, who said the curtailing of women’s rights in the Gaza Strip is becoming common.

"I was previously forced to wear hijab when I was a university student, so I'm not surprised to be banned from running this time," Ghazali said.

But some young women support of Hamas’ decision, such as Haneen Hassan, 21, who argued that the environment in Gaza is not convenient for such activities.

"If we were in another country, it will be comfortable for women to participate in marathons. But in Gaza, all the men will be looking at women while we’re running as they are not used to such events," Hassan said.

Ghazali refuted such an argument, and expressed anger at Hamas’ continued push to relegate women in Gaza.

"I'm fed up with being treated as a sexual object all the time. Hamas has to understand that women are humans and only humans."