A law has been passed by the government of Hamas in Gaza requiring all students to be segregated by gender from the age of nine, Hazem Balousha reports. 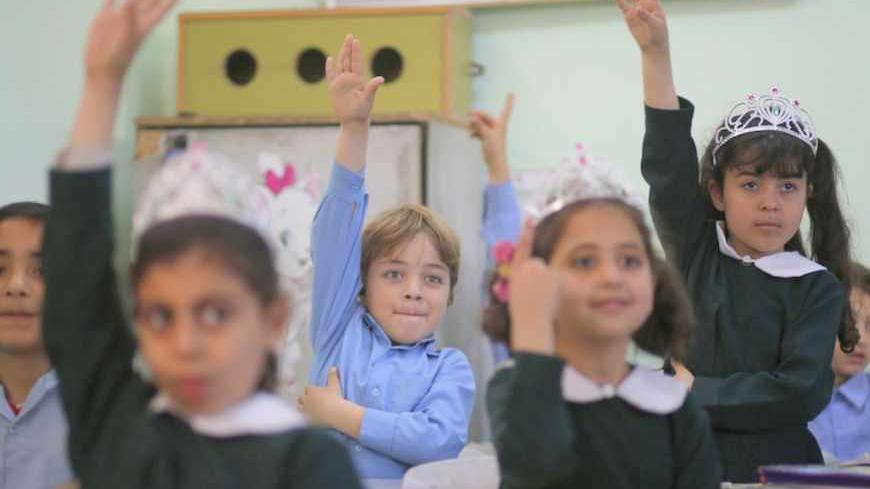 The Hamas government in Gaza has passed a new education law that promotes gender segregation in the schools of Gaza and bars men from teaching at girls’ schools, sparking a wave of criticism from civil society organizations, which accused the movement of seeking to Islamize Palestinian society.

In a news conference held in Gaza on March 31, the minister of education in the government of Hamas, Osama Muzaini, announced the adoption of the new Palestinian education law.

Muzaini stated that the most important characteristic of the new education law is that it was drafted by Palestinians themselves. He said that the education system is no longer based on custom and has now become enforceable by law. Therefore, institutions that do not adhere to it shall be sanctioned.

Article 42 of the new education law stipulates that “boys and girls must be in separate classes in educational institutions after the age of 9.” Moreover, according to Article 47 of the same law, “The Ministry of Education is working on banning men from teaching at girls’ schools.”

The Center for Women’s Legal Research and Consulting (CWLRC) in Gaza has rejected the new education law, as it considers it to promote gender discrimination. The CWLRC said the law is not based on professional standards and will “drag the country backwards, where women have no rights and are excluded from public life.”

For his part, Walid Mezher, the legal advisor to the Ministry of Education told Al-Monitor that the law is considered to be a qualitative leap in the education sector, given that it was previously based on outdated legislation that was enforced during the Egyptian rule of Gaza. He added that “all schools in Gaza, including public schools, some of the private schools, and those run by the United Nations apply gender segregation and this not something new. The law was passed to be a legal reference only.

“The customs and traditions of the Palestinian community, in addition to the teachings of Islam, require gender segregation. This is not to mention that fact that educational scholars have stressed the need to separate boys and girls, as this would benefit both sexes in terms of socialization and education,” he said.

The Gaza Strip has 693 schools, including 398 public schools, 245 run by the UN Relief and Works Agency for Palestine Refugees (UNRWA), in addition to 50 private schools, which serve 468,653 students of all ages.

Samir Zaqout of the Al-Mezan Center for Human Rights expressed his dissatisfaction with the new law, which he deems unnecessary, like the rest of the laws that have been passed during the political division between the West Bank and the Gaza Strip. “The legislations in Gaza are passed without any regard for the necessary quorum of the Legislative Council and are not signed by the Palestinian president, according to the constitution,” he said.

In an interview with Al-Monitor, he said, “The new law is akin to administrative regulations. It is an attempt to serve the rules of Hamas only, without any real aim to help promote the level of education in Gaza.”

Members of the Palestinian Legislative Council from the Hamas-affiliated Change and Reform bloc have convened since 2007 — when Hamas took control of the Gaza Strip — to discuss and approve new laws. These laws are considered illegal in the eyes of the human rights institutions as they have not been passed according to legal conditions.

Zaqout added that this law is designed to impose Hamas’ vision on private schools that do not apply gender segregation.

He also accused both governments in the Gaza Strip and the West Bank of imposing two different types of legislation as the laws passed by President Mahmoud Abbas are different from those passed by Hamas. This is reminiscent of the situation of Palestinian society during the period prior to the establishment of the Palestinian Authority, when the Gaza Strip was following Egyptian laws, while the West Bank was governed by Jordanian law.

A principal of one of Gaza’s mixed schools spoke to Al-Monitor on the condition of anonymity and expressed his concern about the new law being applied in private schools, which would undermine the schools’ system that is based on activities between boys and girls and on promoting bonds of relationship between boys and girls.

Mezher, on the other hand, downplayed the fear of private schools of the new law enforcement, stressing that the Ministry of Education has called on private schools to hold discussions to develop plans to separate classes for boys and girls from the age of nine within a period of one year from the passing of the law.

In this context, according to Article 56 of the new education law, educational establishments, whether private or foreign, shall be granted a period of one year to take the necessary measures pursuant to legal requirements. The ministry will also extend this period if it deems it necessary.

The new law has raised fears among NGOs and the Palestinian community in the Gaza Strip as it comes in the context of a series of measures, campaigns and laws designed to Islamize Palestinian society and impose restrictions on women through the imposition of hijab and gender segregation in all institutions.

Hazem Balousha is a Palestinian journalist based in Gaza City, with a Master of International Relations from Turkey, as well as a BA in journalism. He has worked as a news producer for BBC World Service, as well as contributed to The Guardian (UK), Deutsche Welle (Germany), Al-Raya (Qatar) and many other publications. Twitter:@iHaZeMi