In Bethlehem’s fourth annual marathon, thousands of Palestinian and international runners competed on a half-marathon track in a stark illustration of the tight restrictions on Palestinian movement. 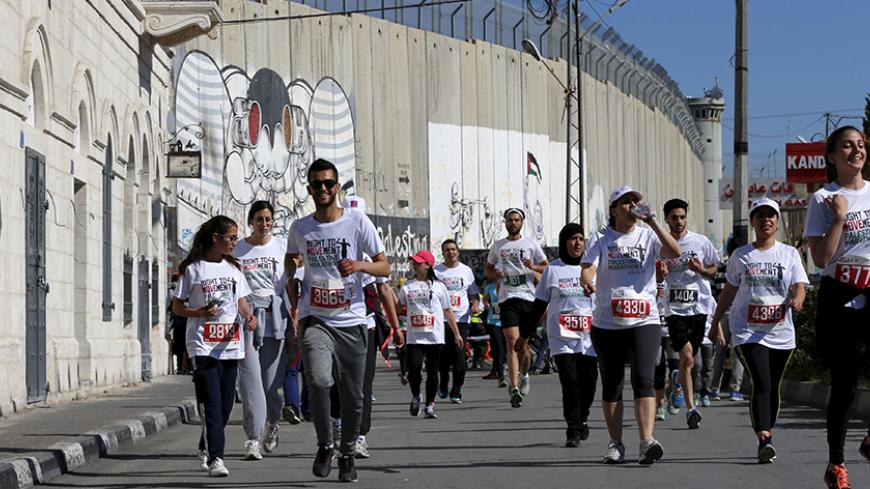 Participants run past the controversial Israeli barrier during the annual Right to Movement Palestine Marathon in the West Bank town of Bethlehem, April 1, 2016. - REUTERS/Ammar Awad

For the fourth year in a row, Bethlehem hosted a spring marathon. Nearly 4,400 participants, including foreigners and local Palestinians, ran, walked or pushed baby strollers in the Palestine Marathon on April 1 in a festive atmosphere.

To finish the full marathon, the runners had to complete two laps of a 21-kilometer (13-mile) track. The inability to provide a single 42-kilometer (26-mile) course lies at the heart of the organizers’ purpose in holding this event. In coordination with the Copenhagen-based Right to Movement, Palestinian organizers have turned the sporting event into a public demonstration of the Israeli restrictions on Palestinians, showcasing the difficulties of living under occupation and being surrounded by an 8-meter (26-foot) concrete wall.

Local Palestinian organizer George Zeidan told Al-Monitor that this year’s marathon was the biggest. Zeidan proudly noted the participation of more than 2,000 women, nearly 46% of all registrants. While a large number of participants completed part of the marathon, 298 men and 89 women ran the entire 42-kilometer run. Runners of 64 nationalities participated in the marathon, which 450 volunteers helped make a major success.

Samuel Dalou from Ramallah told Al-Monitor that he completed a 10-kilometer (6.2 mile) portion of the race at a personal record of one hour and 30 minutes. “The NGO [nongovernmental organization] I work for encouraged us to participate in the event, and I am very happy I did,” he said, adding that the atmosphere was very supportive. “Even the mayor of Bethlehem was out in the streets encouraging the runners.”

South African Mervin Steenkamp was the overall winner with a time of 2:35:26. Last year’s winner, Nader al-Masri from Beit Hanoun in the Gaza Strip, was unable to defend his title.

Masri, along with more than 100 other Palestinians from Gaza, was not granted permission to make the 90-minute trip to Bethlehem. Speaking by phone from Gaza, Masri told Al-Monitor that he was disappointed not to come to Bethlehem after training very hard over the last four months. He said, “I was able to train on terrain similar to that of hilly Bethlehem and was able to bring down my time to 2:40.” Masri, who participated in the 2008 Olympics in Beijing and 30 other races, said that he was also denied to travel to Bahrain and Baghdad to compete.

“They issued a permit for me to participate in the Bahrain race one day after the race was over,” Masri told Al-Monitor.

Israel and the organizers traded accusations over the absence of the Palestinians. Officials with the Coordination of Government Activities in the Territories gave the reason as a delay by Palestinians in submitting the names of the participants from Gaza.

The Palestinian organizers reject the Israeli claim. Zeidan said that in cooperation with the Palestinian Olympic committee, his group had made the initial travel request for 750 Palestinians back in January. “But when Israel rejected this number, a smaller list of 103 persons was submitted in early March.”

Zeidan told Al-Monitor that with the exception of the ban on the Gazan runners, this year’s event was the most successful in the marathon’s four years of existence.

The April 1 marathon was also hailed as a success by the mayor of Bethlehem, Vera Baboun. Speaking to the press on site, Baboun called it one of the most important events of the year for Bethlehem. She reiterated that every Palestinian has a right to free movement.

The marathon’s organizers focus their efforts on demanding the provisions of Article 13 of the UN's Universal Declaration of Human Rights, which states, "Everyone has the right to freedom of movement.”

The marathon's organizers created an interactive website on which participants are able to create profiles for themselves and give the reason they are participating in the Palestinian marathon. According to Right to Movement, “Restriction of movement is one of the major challenges for the Palestinian people living under occupation. Palestinians cannot move freely on roads, or from one city to another.”

While the main theme of the marathon centered on the right to movement, a second theme gained momentum at the event. The issue of inheritance by women was agreed upon as a secondary goal to bring attention to the discrimination facing Palestinian women in terms of inheritance rights. Baboun, Bethlehem’s first female mayor, participated in the 10-kilometer portion of the race and dedicated her run to the Palestinian women who face obstacles in this area.

While sports events are usually devoid of the kind of politics that the annual Bethlehem marathon embodies, there is no doubt that this international event is sharply focused on a clear violation of Palestinian human rights. The restrictions on movement illustrated most vividly by the hundreds of Israeli checkpoints and the concrete wall are unmistakably collective punishment effecting an entire population. While political freedom and independence continue to be the ultimate goals of Palestinians, the simple right to move about freely within one's own country and to others is a good starting point for Palestinians and their supporters.