Daoud Kuttab laments Israeli restrictions to prevent runners from Gaza from participating in a marathon in Bethlehem. 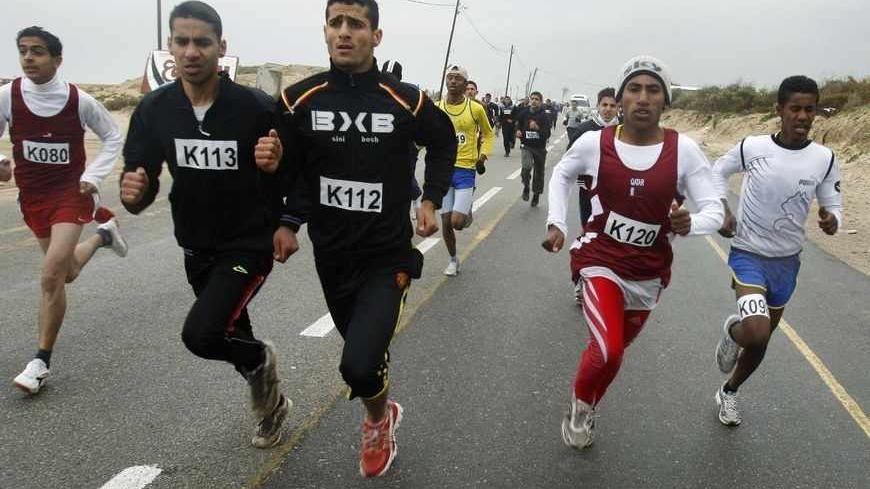 Runners take part in a race in Khan Younis that was part of the second annual Gaza Marathon organized by the United Nations, March 1, 2012. - REUTERS/Ibraheem Abu Mustafa

Sports has often been a national unifying factor. Palestine is no exception.

Palestinian sports has received public and community attention for some time, indeed, ever since the International Olympic committee allowed Palestinian athletes to participate in the Atlanta games in 1996. Majid Abu Maraheel, 32, a distance runner from Gaza and a father of five, was one of three Palestinians who had the honor of carrying the Palestinian flag for the first time in any Olympic meet. Maraheel, a member of the presidential security force, trained for years on the shores of the Mediterranean and thus qualified to run in long-distance races in Atlanta.

Abu Maraheel didn’t win any medals but became a sort of hero among Palestinians for breaking the Olympic ice and raising the Palestinian flag in the United States.

Palestinian runners have not received much attention since. But the recent tragedy in Boston provided Palestinians with a way of showing solidarity with Americans through athletics. A Palestinian marathon official has said that athletes will hold a candlelight vigil Saturday on the eve of their marathon in a public show of condemnation of the bombing at the Boston marathon. Among the 250 Palestinian and international athletes are a number of runners coming from the Boston race.

However, the first Palestinian marathon scheduled to start and end at the Church of Nativity on Sunday will not include some 21 Palestinian male runners and a female runner whom Israel has barred from making the one-hour drive from the besieged Gaza Strip to Bethlehem.

The Israeli human rights group Gisha has protested the unexplained Israeli action, noting that Israel had previously allowed at least one of the athletes to travel via Israel to attend an international meet.

The Israeli action reflects a clear case of hypocrisy. On its website, the Israeli army had published a blog condemning a decision by the Hamas-led government in Gaza on April 11 to prevent runners from participating in a race sponsored by the UN in which women and men participated. The Israeli Defense Forces website called the Hamas action a denial of human-rights freedoms. Now that the Israeli army had a chance to support Palestinian athletics and show that it is different from the Islamic-led government in Gaza, it acted no differently.

Palestinian athletes’ freedom of movement has been an ongoing issue for years. FIFA officials have often relayed Palestinian criticism to Israel for its restrictions on movements of soccer players and officials. Mahmoud Sarsak, a member of the Palestinian national soccer team, received worldwide support when he went on a hunger strike to protest his administrative detention without charge or trial. The protests finally produced his release, but other issues, including this week’s travel restrictions, continue to poison relations between Palestinian athletes and Israeli officials.

All levels of sports have received political and financial support from the Palestinian government. Jibril Rabjoub, a member of the central committee of Fatah, has for years given up any direct political role and has chosen to dedicate his time and effort instead to athletics, developing the national soccer team and supporting all kinds of sports and teams. The Palestinian women’s soccer team has become a story of grit and determination despite not having many successes on the field.

The recent Israeli decision to bar Palestinians from Gaza from participating in the Bethlehem marathon reflects a recent trend in Israeli politics in which every action toward Palestinians is seen as a gesture that must be reciprocated politically. Palestinian leaders are refusing to have face-to-face negotiations with Israelis until the latter freeze settlement activities or agree on the borders of the state of Palestine.

It is very likely that had Palestinians been in talks with Israelis or had the political leadership been willing to take some political act in return for this travel permission, the Israelis would have allowed the Gazan athletes to travel to Bethlehem. As such, this action fits a recurring category of collective punishment that is being levied against an entire people, a clear violation of international humanitarian law, specifically the Fourth Geneva Convention, which regulates how an occupying authority is to act toward people under its military control.