Runners in grueling marathon persevere, as do Sahrawis

Each year, runners brave the harsh conditions of the Sahara Marathon to benefit and show solidarity with the Sahrawi people. 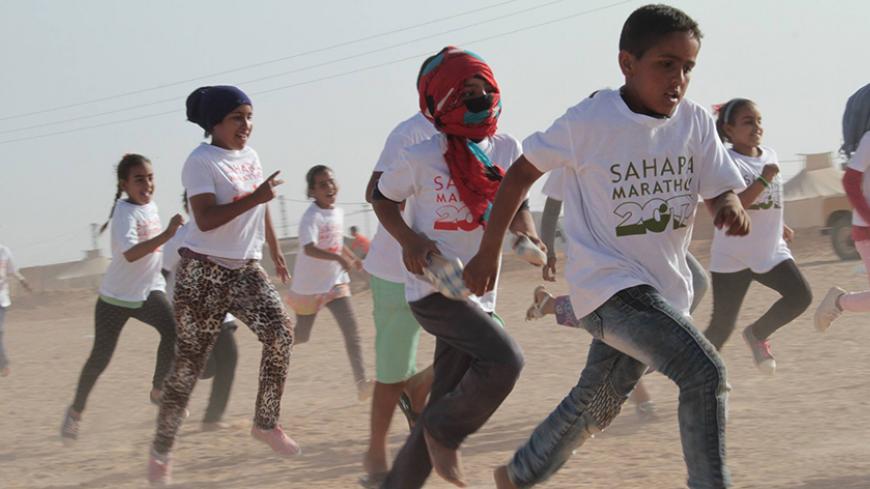 TINDOUF, Algeria — The effort to resolve the Sahrawi people’s struggle in Western Sahara has been a marathon, not a sprint. So perhaps it’s fitting that an annual endurance run is a symbol of the decadeslong Sahrawi trek seeking independence.

Many Sahrawis — the indigenous people of Morocco-controlled Western Sahara — now live in Algerian refugee camps. The Sahara Marathon offers them a unique opportunity to expose their plight to a diverse public.

On Feb. 28, more than 450 runners came to the Algerian Sahara to run the unusual marathon, which takes place in one of the harshest climates on Earth: la Hamada. Participants met the Sahrawis, who have lived in exile for more than 40 years.

This unique encounter helps people from very different backgrounds learn a bit about each other. Because of the lack of hotels and other infrastructure, the desert marathon is a rare occasion for refugees to host and share the little they have with guests in their tent homes where each Sahrawi family has a story to tell.

Sharing the harsh climate and living conditions has made the Sahara Marathon a bridge that connects Sahrawis with people from five continents.

Sahrawi runner Salah Amaidan, 10-time winner of the 10K race, has been part of the past 12 marathons. He was born and raised not in the camps, but in the Morocco-controlled disputed Western Sahara territory of Laayoune. He even represented Morocco in a 2004 race in Belleu, France, but raised the Sahrawi flag when he crossed the finish line. As a result, he said, he was told he would be charged with treason if he returned to Laayoune. He sought asylum in France.

Three years later, he visited the camps in Algeria.

“I first came to the Sahrawi refugees’ camps through the Sahara Marathon in 2007. It was really emotional to meet the other half of my people whom I had not seen before,” Amaidan told Al-Monitor.

The continuous stalemate over the disputed territory has withstood several attempts to reach a resolution since a United Nations referendum on self-determination was blocked in 1991. A cease-fire-based solution has not yet resolved the situation. Therefore, sports have become a way to get the Sahrawi message to a greater audience.

That made it particularly difficult for Amaidan to reach a decision recently after more than 25 years of running. “I have had frequent injuries, so I am retiring from this marathon,” Amaidan said.

But he wants to deliver the torch to the next generation. “I look forward to training young Sahrawis to become tomorrow’s champions,” he said.

For this reason, the Sahrawi Arab Democratic Republic — the state the Sahrawi people declared in 1976 — has founded a Sports and Youth Ministry that coordinates with international supporters to organize sport events in the Sahrawi refugee camps.

Sidahmed Tahlil is president of the Sahrawi Olympic Games Federation. “In 2001, there were five countries in the Sahara Marathon. Now, we have 22 participant countries,” Tahlil told Al-Monitor.

Increasing interest in the Sahara Marathon is helping to set the stage for Sahrawi sports institutions. “Each of all five [refugee] camps have a sports project that was realized through the Sahara Marathon. In addition, we have founded a training program for young Sahrawi runners as well,” Tahlil said.

“For the first time in the Sahara Marathon, we have a Sahrawi runner who won fourth place in the full 42K marathon,” he added.

Some Sahrawis opt to run a full marathon to show support for their people’s struggle, and others walk along the way with them.

Sahrawi runner Mohamed Ramdan lost his left foot in a 2002 landmine explosion at the minefield wall that separates the disputed Western Sahara territory. He insisted on running the 42K race despite the difficult Sahara terrain and his prosthetic foot.

“It is the third time I’ve run the 42K,” Ramdan told Al-Monitor. “I want to dedicate this effort to my people who have endured life in refugee camps for more than 40 years. I also want to thank those who stand by us in such hard times.”

Wolfgang Hoffmann, a 73-year-old German, began participating in the Sahara Marathon in 2003. “I have developed a special relation with the family that hosts me here in the camps. I’ve even known one of the kids since they were born in mid-2000,” he told Al-Monitor.

Now, Hoffmann has become an ambassador for Sahrawi refugees, sharing his experience with his friends in Germany. “Every year, my colleagues and I work on bringing six people to the camps here to show our solidarity with Sahrawi refugees in Tindouf.”

Other Sahrawis have established bonds with their guests. Damaha Daha is a Sahrawi refugee who has hosted marathon organizers for the past 17 years. “I now consider them part of our family,” Daha said of the marathon supervisors, who are mostly from Spain and Italy.

“I have noticed that they express more support each year. Every time we talk, we feel closer to each other,” Daha told Al-Monitor.

John Xalvador Bella, who came all the way from Bilbao, Spain, to the Algerian desert, brought his wife and son to the marathon.

“I’ve now come to the same family for four years,” he said. “I will not forget the day I was leading the 25K race and my foot broke. However, I did not stop. I saw the Sahrawi people in front of me, so I decided to complete 17 kilometers walking with a painful injury,” Bella told Al-Monitor.

These relationships are fostered one marathon after another. The Sahara Marathon allows Sahrawis to get their message to the outside world through sports instead of politics and weapons. They hope such efforts will break down information barriers so they can present themselves as eyewitnesses of a barely known plight that remains unresolved to this day.