A Sahrawi woman's successful business of producing traditional garments is helping other Western Sahara refugees support themselves in Algeria after decades of dependency on aid organizations. 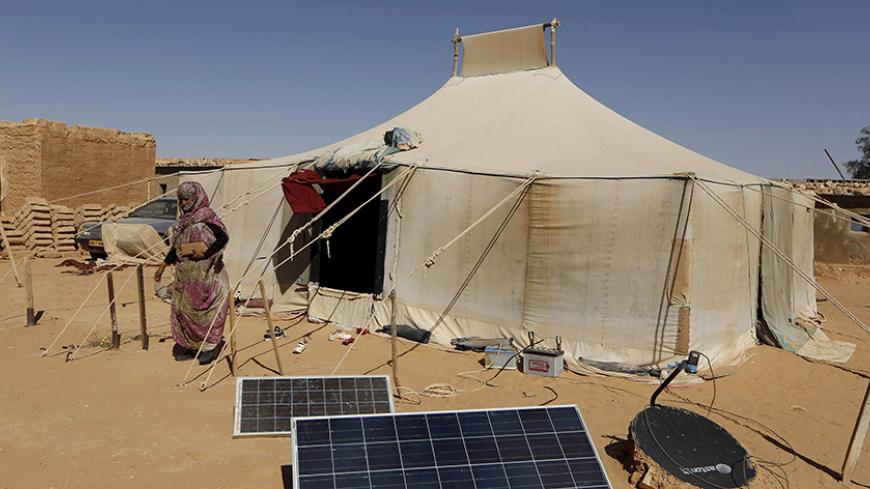 TINDOUF, Algeria — Sahrawi refugees have been dependent on humanitarian aid to meet their basic needs for more than four decades. They live on support provided by the United Nations or other civil society organizations to help improve everyday life in the refugee camps. However, as such help is decreasing with the refugee crisis spreading across Europe and the Middle East, some Sahrawis are becoming entrepreneurs.

Ambarka Mohamed Salem decided to turn humanitarian assistance into an opportunity for Sahrawi women to become self-sufficient. Like her peers, she fled the Moroccan-occupied territory of Laayoune, in the disputed Western Sahara region, when she was 10 years old.

“I first arrived to the camps with my parents on Dec. 25, 1975,” she told Al-Monitor. Forty-one years later, Mohamed Salem is the director of a factory that makes "melhfas," a traditional garment for Sahrawi women. The project, which began June 5, 2013, is financed by the Swedish International Development Cooperation Agency (Sida), a government agency. The factory, made of mud bricks, is surrounded by sand. Inside it, 18 women work six hours a day, six days a week. The type of melhfa made there measures 6 meters by 1.6 meters (20 feet by 5 feet). "It is made of imported cloth from Mauritania,’’ Mohamed Salem said.

The trading industry has long connected the camps with the Mauritanian town of Azwairat. So, Mauritanian and Sahrawi merchants have found a company that provides transportation to and from the camps. Mauritania and Algeria are the only countries Sahrawis can enter without a passport, including even Spain, the former colonial ruler of the Western Sahara. Because of the convenience and proximity of Mauritania, Sahrawis travel there to buy the raw material for any business that they want to start in the camps.

The melhfa is a common garment worn by both Sahrawi and Mauritanian women, who are identified by the apparel. There are several stages to making the outfits. The young women in the room divide roles as they cut fabric into pieces. After they stitch the fabric, it is ready for tailoring. After it is dyed, it is dried outside in the open air. “Each worker makes 32 melhfas per month," Mohamed Salem told Al-Monitor.

“The factory’s first production run was donated to families who have lost members in the Western Sahara war, and people with special needs in the camps,” she said.

The factory is now self-sufficient and sells melhfas designed for religious and cultural events. Mohamed Salem said she hasn't been marketing the garments, as production is limited, but the workers made at least 2,500 mehlfas in their last production run, according to administrative office staff.

“Our goal is to expand this project to include all camps because all Sahrawi women wear melhfas,” said Mohamed Salem.

Despite such success, her hopes might be tempered by the Swedish government redirecting its funds to the UN High Commissioner for Refugees instead of Swedish nongovernmental organizations (NGOs).

The repercussion of that change is already hitting the NGOs. Swedish NGO Practical Solidarity is one of the main sponsors of Mohamed Salem's project, and has supplied refugees with second-hand clothes since 1976. This year, it cut its donations in half because of the lack of funding. Also, Mohamed Waddad, the cooperations director at the Sahwari Arab Democratic Republic Ministry of Equipment, told Al-Monitor, “Sida’s financial assistance to the melhfa factory has been reduced in the last two years.” He said Sida helped with the cost of transporting the second-hand clothes, but if the United Nations refugee agency, UNHCR, takes charge, the project will have to buy the clothes and fund the shipping, "which will double the cost.”

Even so, Mohamed Salem is resolved to continue her project. She has brought her daughter into the business as administrative manager. Glaila Mohamed Salem has a small office in the storage area, where hundreds of melhfas sit stuffed on shelves. When her mother was asked about how she will overcome the financial obstacles, she said, “I have been in way more difficult situations and I overcame them.” She said her daughter is amazed by some of the stories she tells. “When I tell her that we used these melhfas as shelters when we first came here to Tindouf, Glaila widened her eyes, unable to believe this.”