Domestic Violence Against Palestinian Women on Rise in Gaza

Half of Gaza's married women are subjected to some form of domestic violence, but authorities do not want to hear about it. 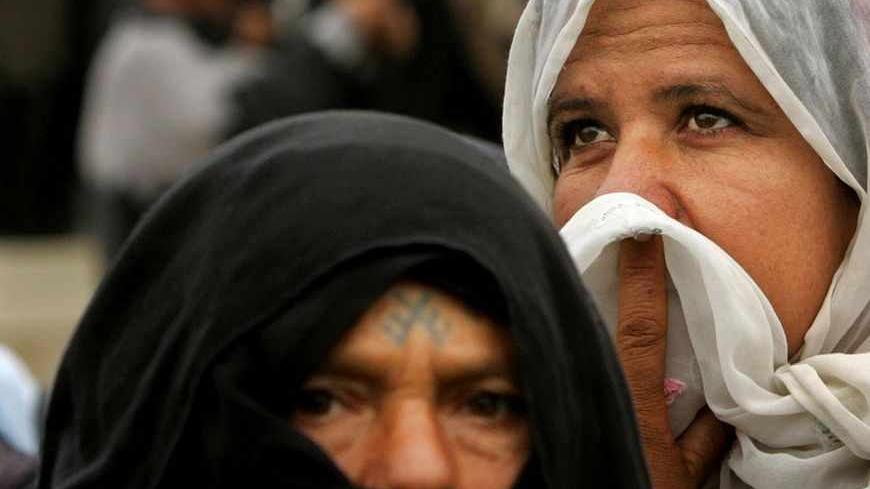 Palestinian women participate in a demonstration in the Palestinian territories in Gaza City, Dec. 20, 2005. - REUTERS/Mohammed Salem

GAZA — “Ibtissam,” a 27-year-old woman from the town of Beit Hanoun in the northern Gaza Strip, asked for a number of guarantees before beginning to talk, among them that her real name not be used and that her story not be relayed to organizations assisting battered women. Despite attempts to reassure her when she met with Al-Monitor in public, she kept looking behind her for fear that her husband or one of his relatives might see her.

She had a gauze patch over one eye, stemming from a punch by her husband. Yet, that was not her motivation for meeting with Al-Monitor. Rather, what compelled her to be interviewed was her desire to make a change in her life. Thus, she recounted the details of her story, full of constant violence, including beatings and death threats, at the hands of her husband.

Ibtissam is not the only battered wife in Gaza. Some 37% of married women in the Palestinian territories have been subjected to domestic violence by their husbands. Of these, 51% live in Gaza according to a 2012 study by the Palestinian Central Bureau of Statistics. Speaking in hushed tones for fear that passersby might hear, Ibtissam recounted her story.

“My husband did not like what I cooked for dinner, so he punched me in the face, injuring my eye. I often get severely beaten for trivial reasons. I am cruelly insulted, but cannot find anyone to listen to my plight or help me overcome my predicament.”

Despite the hoarseness evident in Ibtissam’s voice as she spoke, her uncovered eye remained dry, as if turned to stone in its socket. Trying to remain calm, she continued speaking.

“No one cares about me, and this increased the frequency of my husband’s physical assaults and verbal insults. He even allows his mother and sisters to hit me during familial disagreements.”

The young woman explained that two things had prevented her from talking about her ordeal: first, her family did not care about what she was being subjected to, and second, fear of the death threats by her husband if she dared to talk. She even told the doctor who treated her eye that she had “fell off a ladder.”

Ibtissam takes her husband’s death threats seriously. She recalled an incident in which a man stabbed his 62-year-old wife to death in the southern Gaza town of al-Qarara, north of Khan Yunis, on July 16.

Husbands are not the only perpetrators of violence against women. There are documented cases in which the aggressors have been people from a husband’s family. For example, in a May 25 incident, 26-year-old Nawal Qdeih, six months' pregnant in the town of Khazaa, east of Khan Yunis, was assaulted, stabbed in the head and back and then choked by her husband’s mother and sisters. They killed her and her unborn child.

The Palestinian Center for Democracy and Conflict Resolution has recorded more than 400 cases of severe acts of violence against women. These include 16 murders during the past year in the Palestinian territories, a fact disclosed at the center's Aug. 27 symposium, “The Role of the Media in Cases When Women Are Murdered.”

The frequency of these attacks is increasing because women prefer to remain silent. About 66% of battered women chose to remain quiet, while 37.7% of them leave their husbands and flee to their families. Only 0.7% approach women’s centers, according to the Bureau of Statistics study.

Amal Siam, director of the Center for Women's Affairs, elaborated on the statistics. “Given the patriarchal and conservative nature of our society, battered women have very limited avenues for expression. Customs and mores frown upon women who accuse their husbands of such acts, considering their accusations rude and unacceptable,” she said.

In an interview with Al-Monitor, Siam explained that this societal view increases women’s vulnerability to corporal and other forms of violence. She pointed out that since the beginning of 2012, her center’s legal office had received 100 cases and dealt with approximately half of them. In 50 cases, the women had chosen  to file grievances with the appropriate courts to defend their rights. Such rights relate to ethical considerations, divorce costs and inheritances.

The Bureau of Statistics report indicated that Palestinian women face many forms of violence, with 76.4% of Gazan women being subjected to emotional violence, 34.8% to physical violence, 14.9% to sexual violence, 78.9% to social violence and 88.3% to economic violence.

Siam affirmed every woman’s right to file charges when subjected to any form of violence, but added that only a “very small number of women talk or resort to the police and file grievances against their husbands, because society deprives them of their rights and considers their grievances to be shameful.”

She asserted, nonetheless, “Society must hold men who hurt and beat their wives responsible for their reprehensible actions.” She described the police response to such cases as “reticent.”

Gaza police spokesman Ayyoub Abu Shaar said that the police force deals with such cases according to pertinent laws if a woman is hurt or beaten and presents a medical report that proves it. In cases where no physical harm results from the violence, the complaint is transferred to the public relations department, which tries to find an amicable solution for the husband and wife to prevent them from divorcing.

“We do not want couples to divorce. That is why we try to reach an amicable solution without filing a complaint. But in cases where the wife insists upon doing so, we record her grievance, summon the aggressor, interrogate him and hand him over to the prosecutor general’s office as the law demands,” Abu Shaar said in an interview with Al-Monitor.

Abu Shaar said the police force refrains from publishing statistics about the number of women who file complaints against their husbands, as well as the number of those subjected to violence, so as not to encourage more women to speak up, as it is not socially acceptable.