Rights groups under attack for defending women in Gaza

Women’s rights organizations in Gaza supported two young women who escaped their father’s violence, prompting an incitement campaign against these organizations due to the conservative nature of Gazan society. 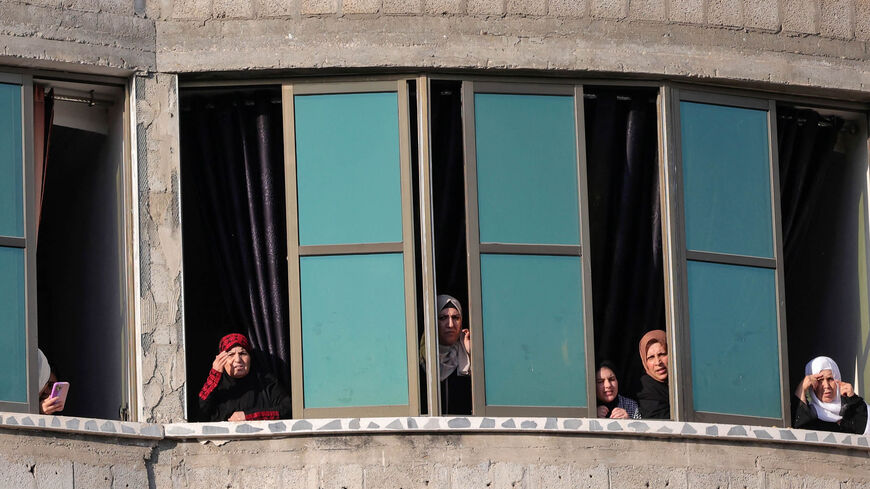 Palestinian women watch from a building as demonstrators rally at Falluja cemetery in Jabalia, where five youths were killed during the latest round of conflict between Israel and Palestinian militants before a cease-fire, Gaza Strip, Aug. 16, 2022. - Mohammed Abed/AFP via Getty Images

GAZA CITY, Gaza Strip — Wissam al-Taweel, a 21-year-old woman from Rafah in the southern Gaza Strip, sparked controversy in the coastal enclave after posting a series of videos on Facebook in September explaining how she and her sister Fatima, 20, jumped from the balcony of their house to escape the violence and death threats of their father, as official authorities fall short of providing protection for women suffering from domestic violence.

The videos prompted a support campaign on social media, under the Arabic hashtag that translates into “Save_Wissam_Fatima.”

Women's rights organizations also intervened to try and protect Wissam and her sister.

But the support campaign was met with an unprecedented attack against women’s rights institutions in Gaza, as many alleged that these institutions are violating customs and traditions by calling for the protection of the rights of unmarried women and keeping them in a shelter.

The girls’ father, Imad al-Assi al-Taweel, responded to his daughters’ allegations in a video posted on social media, and attacked women’s rights organizations considering their intervention to protect his daughters an “attack that goes against Palestinian customs and traditions.”

He also claimed that his daughters had been kidnapped.

In a press release issued Sept. 29, the Palestinian NGOs Network (PNGO), a coalition that includes dozens of Palestinian nongovernmental organizations, called on human rights institutions and local authorities to protect NGOs defending the rights of women in the Gaza Strip from the campaign of incitement that “is starting to take a serious turn in light of growing threats and intimidation.”

Zainab al-Ghunaimi, director of the Center for Women's Legal Researches and Consulting (CWLRC) in Gaza, was subjected to a campaign of defamation after defending Wissam and her sister.

“There are prominent and religious figures who threaten feminist organizations either through written statements on social media or in their Friday sermons. These threats incite the Palestinian street against women’s institutions, and prompt aggressive behavior on the part of husbands, fathers or brothers against women that are defended by these organizations,” she told Al-Monitor.

Ghunaimi said she faced direct threats on social networking sites over her work defending women’s rights in Gaza, including the Taweel sisters.

She noted, “Although the law [somewhat] protects battered women, it is social traditions and customs that prevail. The law protects us as defenders, but social extortion unfortunately hinders the protection of women’s rights.”

In regard to the role of shelters in rescuing battered women, Ghunaimi said the Hayat Center, which is managed by the CWLRC, receives at least 500 cases of abused women and girls on a yearly basis.

Many women in Gaza are scared to report cases of violence, harassment or rape for fear of social stigma. Oftentimes, Gazan women request psychological and social support from institutions, but they refuse to officially report their cases.

Abdel Moneim al-Tahrawi, project manager at the Palestinian Center for Democracy and Conflict Resolution in Gaza, told Al-Monitor, “Many in Gaza believe that institutions working in the field of gender-based violence seek to empower women to confront men, which is a misconception.”

Majida al-Belbeisi, a member of the Himaya Network for combating gender-based violence at the Jabalia Women’s Health Center, which is affiliated with the Red Crescent Society for the Gaza Strip, told Al-Monitor that the attack on women’s institutions in Gaza comes in the context of a wider incitement campaign against these institutions.

The story of the sisters Wissam and Fatima will seemingly not be the last, but their audacity is new in the conservative society in Gaza. The question remains as to whether the protection provided by women’s institutions to these girls will be sufficient amid the threats that these institutions are facing.