Palestinian women take to social media to reveal their names

The non-identification of women’s names in electoral lists and wedding cards triggered a campaign on social media calling for the empowerment of Palestinian women. 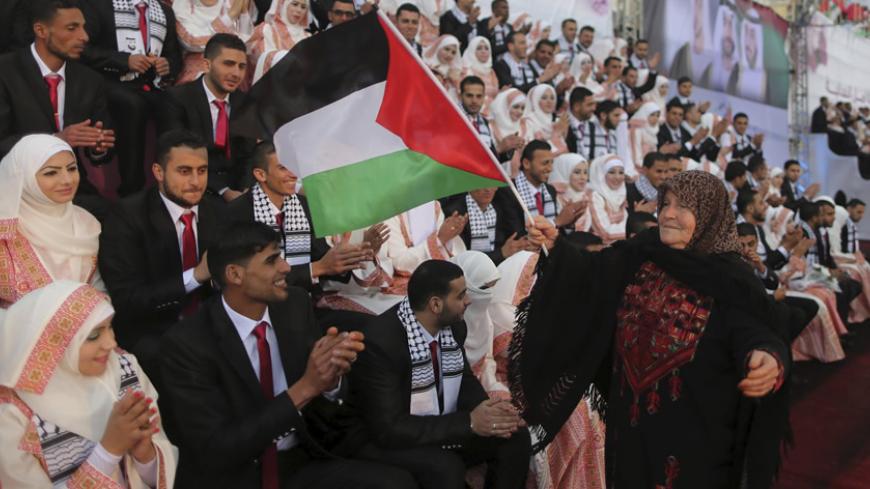 A Palestinian woman waves a Palestinian flag next to grooms sitting with their brides on the stage during a mass wedding for 200 couples in Gaza City, April 11, 2015. - REUTERS/Mohammed Salem

GAZA CITY, Gaza Strip — Palestinian society remains a patriarchal one, hindering women’s access to their rights. Palestinian women are often denied their rights by their husbands, fathers or even tribal sheikhs. Some males consider that even mentioning the name of a woman in Palestinian events, such as weddings at the social level or in the elections at the political level, is unacceptable. Women’s names are thus hidden, and instead they are identified as “sister of” or “wife of,” or by her initials.

Some lists taking part in the Palestinian local elections that were slated for Oct. 8, but have now been delayed, replaced the names of their female candidates with “wife of” or “sister of.” When this happened in a list in the village of Tammun, south of Jenin, Palestinians condemned this act and the Arabic hashtag that translates into “Our names should not be covered” went viral among Palestinians.

Not only are the names of females removed from the electoral lists, the name of the bride is often absent from wedding invitation cards and substituted with her initials.

Nadia Abu Nahla, the director of the Women’s Technical Affairs Committee (WATC), told Maan News on Sept. 1, “The fact that some lists covered the names of female candidates is viewed as a serious decline in the lists' capabilities and in the way these movements think, even though the actions are justified as being in line with the social [conservative] character in some areas.”

Abu Nahla continued, “If their names are not recognized, how can women’s needs be added to the planning and coordination of the municipal agenda.”

Amal Habib, the presenter of the "Beitna" show dedicated to women on the Hamas-run Al-Aqsa TV channel, told Al-Monitor, “I think it's shameful that some people still believe that women’s names should be omitted. I’m shocked at this culture and how it was embraced. Women should be called by their names out of respect and our names should not be hidden.”

She added, “It is the right of every woman to participate in all political and government institutions, in accordance with Palestinian law.”

Activist Sumaya al-Mashharawi wrote on her Facebook page Sept. 2, “Our names are not mere terms; our names refer to our identity, which ignorant people do not understand.”

For her part, activist Ghada Shoman wrote on her Facebook page Aug. 30, “The bride’s parents have the right to be proud of their daughter, and have the family name proudly used in weddings and written on wedding cards. She is not nobody, and if, in your eyes, her name should be omitted, then her parents’ names should be omitted too.”

Article 5 of the Palestinian Local Elections Law of 1996 allows women to be part of any elections, without discrimination. Also, according to Article 12 of the Palestinian General Elections Law of 1995, “Every Palestinian [woman or man] aged 30 years or older on polling day, who is registered in the final electoral register and who meets all the qualifications required to be an elector, has the right to submit his or her candidacy for the membership of the council.”

Women's rights activist Diana Maghribi, a member of Filastiniyat Association, told Al-Monitor that the campaign dubbed “Our names should not be covered” is a call to all educated women to urge the patriarchal society to stop neglecting this powerful social driver,” as women, who constitute half of Palestinian society, can participate in the community just like their male counterparts.

“Those women who agreed that their names be hidden on special occasions are being oppressed in their community and never wanted to assume any leading role in the community. Today, a lot of women have refused to take their husbands’ name after marrying, while many opted for pleasing their spouses who link name-changing to manhood,” Maghribi said.

Activist Ramadan Nabih said that hiding women’s names on special occasions is a type of sexism, is offensive for women and is a tradition that has nothing to do with Islam. He told Al-Monitor, “Islam commanded us to be good to women and the names of all of the mothers of believers are mentioned in the sunna [Islamic traditions and practices]. The fact that women’s names should be covered has nothing to do with religion. Rather it is linked to obsolete customs and traditions, through which some youths seek to dominate their wives by veiling their features and personalities.”

In 2013, Palestinian women made up 49.2% of the Palestinian community, according to the Palestinian Central Bureau of Statistics. There are 2.34 million women and 2.41 million men, which means that there are 103 men for every 100 women.

Jamil Tahrawi, a professor of psychological and family counseling at the Islamic University, told Al-Monitor that hiding women’s names is a negative tendency unjustified by customs, norms and religion.

“Hiding the names of women is an attempt to obscure their prestige and presence in the community, while some men believe that such acts are linked to their manhood. This is the product of the minor role women assume in the community. In Islam, the Prophet Muhammad called his wives by their names and was not ashamed," he said.

Attaf Abu Ghali, an expert in psychological and family counseling, told Al-Monitor, “This phenomenon started to fade with the emergence of social media, and the remaining practices are limited to ignorance and old customs.”

He added, “As part of the Palestinian social traditions, shame was attached to revealing women’s names, due to ignorance. Today, every girl and her family have the right to refuse that her name be covered on the wedding invitation card. The primary goal of the invitation and the event [wedding] is to become known. Women make up one half of society today and they have the right to be integrated in all social institutions.”

Social media played an important role in convincing women to defend their right to show their names, and to confront Palestinian patriarchal society. Those who used the hashtag “Our names should not be covered” proudly and clearly mentioned in their posts their own names and the names of their mothers and sisters.