During campaigning for the local council elections in the West Bank, the photos of many female candidates were withheld. 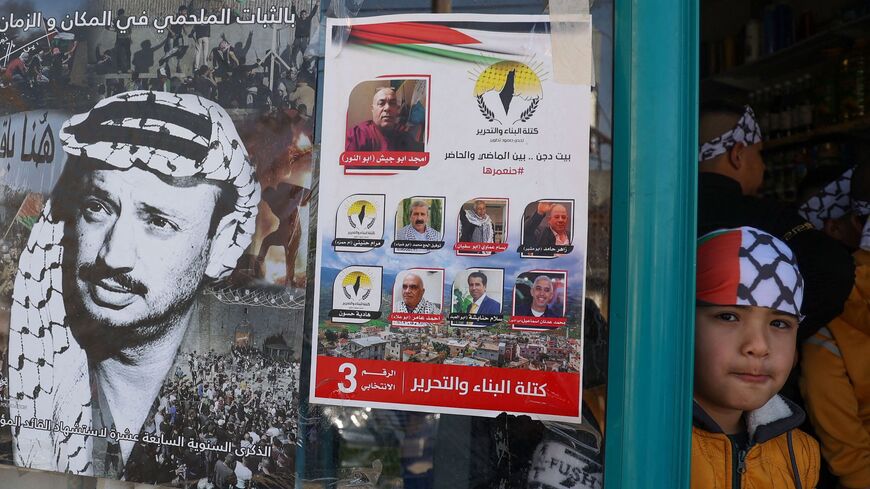 A boy looks on next to an image of late Palestinian leader Yasser Arafat (L) and candidates in the municipal elections in Beit Dajan, east of Nablus in the occupied West Bank, on Dec. 11, 2021. - JAAFAR ASHTIYEH/AFP via Getty Images

GAZA CITY, Gaza Strip — During the campaigning for the West Bank's local elections, many of the faces of female candidates were replaced with a rose or silhouette on electoral lists and campaign posters.

About 65% of eligible voters turned out for the first round of voting on Dec. 11. The second round, to be held March 26, will determine the makeup of 66 local councils for larger municipalities.

“It reflects men’s domination over women in Palestinian society,” she told Al-Monitor. “It is most likely that the female candidates were pressured by their fathers, husbands or sons to withhold their photo from the electoral lists. Women showing their faces in public is still considered shameful in Palestinian tribal traditions.”

She went on, “I don’t think this has to do with religion or affiliation with Islamic parties. Some ladies whose photos were withheld belong to leftist parties and the Fatah movement. It is more about social traditions and custom and not religiosity.”

Odeh also placed some blame on the candidates themselves who accepted this arrangement.

“How can a woman who would become a member of a municipal council and have a role in serving her town accept having her photo hidden? How will they promote women’s rights in their community?” Odeh asked.

Candidate A.F., who spoke to Al-Monitor on condition that the list she was running on and the town she represents not be revealed, said that she faced pressure from her family not to show her face.

“My husband and father asked me to hide my photo or not run for the elections. So I agreed because I wanted to throw my hat in the ring. Should I win in the elections, I intend to work hard in collaboration with women’s rights institutions in a bid to change society's views of women and enhance their role and status in society as well as highlight the importance of their participation in decision-making circles without interference,” she said.

Mara Hanani is a candidate for the Fatah-affiliated Building and Liberation list in the town of Beit Dajan east of Nablus with a population of some 4,000 inhabitants. She told Al-Monitor that it was her choice to keep her photo off electoral lists and posters.

Hanani, who is known in her town for being a community activist, said, “I think all the talk about the female candidates’ photos is bullying and encroachment of personal freedoms.”

“I received dozens of phone and social media messages attacking my choice not to have my photo on electoral posters and banners. I just wanted to say that this was my own decision and I was not coerced into making it. I don’t have to make excuses to anyone. This is freedom of choice,” Hanani said.

Many local residents expressed their views on social media.

Women’s rights activist Zainab al-Ghonaimy wrote Nov. 29, “The electoral lists that hide the photos of her female candidates are not to be trusted. Do not vote for them. Those who undermine and marginalize women are not worthy of trust.”

Another Facebook user, Amin Abed, wrote Dec. 1, “Some electoral lists replaced the female candidates’ photo with a rose or a silhouette, reflecting their demeaning view of women, who have always been partners in struggles and makers of revolutions.” Abed called on Palestinian President Mahmoud Abbas and the Central Elections Commission (CEC) to “punish those who made this decision that undermines our struggles and women and not recognize these electoral lists.”

Civil society organizations registered with the CEC as election monitoring bodies expressed in a Nov. 29 statement the necessity “to respect the women candidates’ personhood and dignity and publish their names and photos on electoral lists, as including them honors women’s presence and historic role in the Palestinian struggle.”

CEC spokesperson Farid Tamallah told Al-Monitor, “The Palestinian electoral law does not obligate female candidates to have their photos published.” He went on, “The CEC, however, believes that hiding the female candidates’ photos undermines women’s dignity.”

Talib Awad, president of the Arab World Observatory for Democracy and Elections in Ramallah, told Al-Monitor, “The CEC’s position on this arrangement is murky, unclear and does not do justice to the female candidates.” He went on, “The CEC should have explicitly rejected the admission of any electoral list that obscures female candidates’ pictures."