Why did Fatah remove female candidates' names from electoral lists?

Fatah did not identify the names of female candidates on some of its electoral lists running in the Oct. 8 local elections, which raised the ire of activists who took to social media. 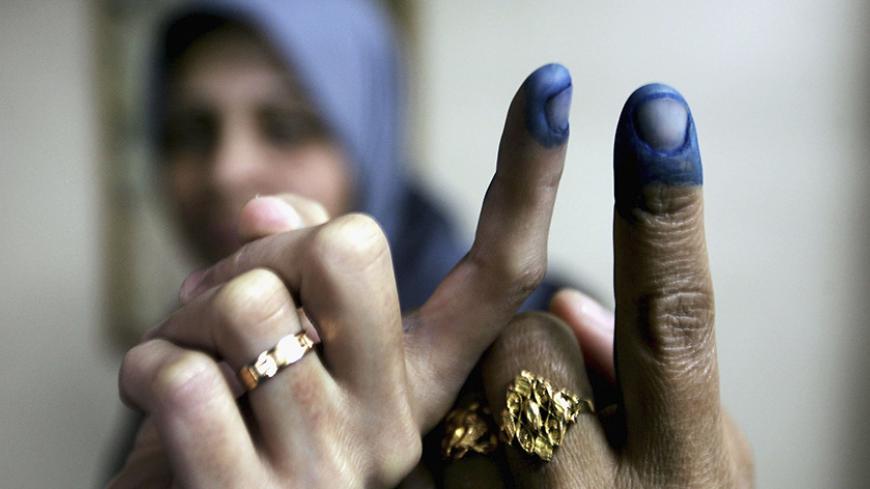 Palestinian women show their inked fingers after voting in the Palestinian legislative election at a UN school that is being used as a polling station, Gaza City, Gaza Strip, Jan. 25, 2006. - Abid Katib/Getty Images

The nonidentification of female candidates’ names on some Fatah lists participating in the Palestinian local elections slated for Oct. 8 has sparked angry reactions on social networking sites. Several lists running in the local elections appeared online Aug. 26, not giving any of the names of the female candidates, however, as they were listed as “sister” or “wife of.”

Journalist Nour Odeh, the spokeswoman for the previous Palestinian government, wrote on her Facebook page Aug. 29, “My name is Nour Odeh and women's names should not be left out. I will not vote for a list that deals with women in this manner. Period.”

Odeh told Al-Monitor, “All parties — left-wing or right-wing — favor conservatives and act cowardly when it comes to civil secular identity. There are those who tend to demonize the secular thought and civil state.”

The director of the Women's Affairs Technical Committee in the Gaza Strip, Nadia Abu Nahla, agreed with Odeh and told Al-Monitor, “Fatah started off as a secular national movement, but in recent years — and after Hamas took over Gaza — the movement has taken on a more conservative character and has become closer to the mainstream trends of society.”

She added, “In some areas where tribalism prevails, Fatah leans toward conservative trends to achieve political and social gains, whereas if we look at the Fatah lists in major cities, we see it closer to liberalism.”

On Facebook, users launched a hashtag that translates into “Our names should not be concealed," after the names of female candidates were not listed. It is, however, not the first time that female names are hidden on public announcements. Wedding invitation cards sometimes omit the names of the females invited because some men prefer to hide the names of their partners, and photographs of female martyrs sometimes show a rose instead of the face of the deceased woman.

Female activists and journalists used the newly created hashtag along with their names and the names of their mothers, sisters and friends on Facebook; men have been using this hashtag as well.

Abu Nahla said even though this reaction was limited to social networking sites, “It managed to influence decision-makers and forced the Central Elections Commission [CEC] to issue a dismissive statement. I believe that many parties other than Fatah were going to opt for nonidentifying female candidates’ names.”

The CEC statement issued Aug. 29 confirmed that it was expecting to receive nomination lists including the full names of all candidates, stating that the CEC is not responsible for some lists’ nonidentification of their female candidates.

Odeh said that what happened has led to a debate about the role and status of women in Palestinian society. This discussion is also expected to serve as a deterrent for electoral blocs to hide women's photographs in the electoral lists.

Ramadan Barakeh, the Fatah campaign coordinator in the southern Gaza Strip, told Al-Monitor, “The names of our sisters are not hidden and the Fatah movement has a real partnership with women.”

On Aug. 29, the lists that had initially hidden the names of the female candidates were republished with their full names, and it was not long before the Hamas-affiliated list of “Gaza Hashem” was announced, not only with the names of both female and male candidates, but also with their photographs.

The election campaign — which is due to commence on Sept. 24 — started early, however, prompting the CEC to criticize this behavior that is contrary to the Local Elections Law of 2005.

In the runup to the upcoming elections, it is easy to notice the propaganda behavior of both Fatah and Hamas on social networking sites. Fatah is emphasizing the changes it has made in society, such as the Islamization process, the military achievements and the building of residential projects. While Hamas is using hashtags such as #Ready and #Before and after, Fatah has responded with similar hashtags on newly created Facebook pages that translate into “We will vote for Fatah no matter what” and “We will build It.” These accounts were quickly filled with posts about the movement's past, images of national emblems, songs accompanied with old videos and criticism of Hamas’ 10-year rule.

However, it seems Fatah’s early campaign was not based on a well-thought-out plan as the movement failed to use technology effectively, unlike Hamas, whose media department was clearly keen to use technological means and produce the most modern videos, such as the one titled "Thanks Hamas" that highlights what is deemed to be Hamas’ accomplishments in the Gaza Strip, including the development of touristic areas. These, however, were widely criticized by activists on social media for not reflecting the reality on the ground.

Commenting on the competition, Fathi Sabah, the director of the Palestinian Institute for Communication and Development, told Al-Monitor, “The early electoral campaign that violates the law has turned into a strong aversion of the other party rather than a democratic experience whereby each party accepts the other.”

He said, “The two parties are spreading fake logos and accomplishments, while each party is busy highlighting the disadvantages of the other."

He stressed that Fatah’s campaign does not look convincing in Gaza, as the movement has failed to accomplish anything positive for a decade, knowing that the Palestinian Authority’s decisions, which include the nonpayment of the salaries of former government employees, have harmed the Gaza Strip.

Asked about the names of female candidates initially not appearing on the electoral lists, he said, “Fatah wanted to show that it was more religious than its rival Hamas, which led it to face great opposition from independent people.”

The electoral atmosphere in Gaza has taken on a more acute direction on the ground. Barakeh, who was physically attacked Aug. 29, said, “I received a threat when I was at the CEC. An hour after the threat, a group of masked gunmen attacked me as I walked out of the CEC office. They kidnapped me, beat me and then pushed me to the ground.” He said that the goal was to prevent him from carrying out his mission, which consists of coordinating Fatah’s campaign in the southern Gaza Strip.

The current competition, both on the ground and on the internet, is only a small indication of what could happen when the elections draw closer.