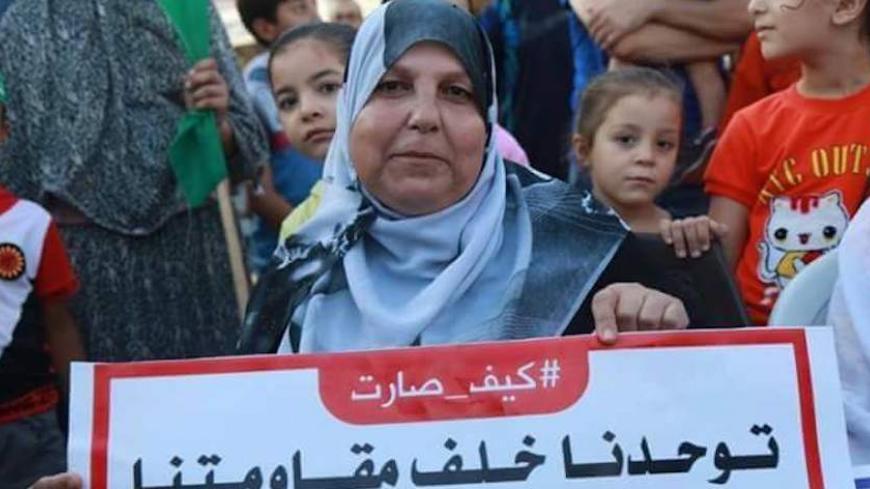 A woman in Gaza holds a poster with the "Before&After" hashtag, Aug. 24, 2016. - Facebook/Bara Abu Mohammed

Eleven years have passed since the Palestinians headed to the polling stations, and it seems today that the eagerness for the local council elections slated for Oct. 8 pushed numerous civilian enthusiasts to launch early electoral campaigns.

These elections are different from the last elections in 2006, as social media is now used for early campaigning and is mirroring the state of polarization between Hamas and Fatah.

This appears clearly through the posts of social media users close to Hamas via media campaigns under hashtags allocated to support the movement — #Ready and #Before&After, as well as #GazaMoreBeautiful.

These hashtags were also used by Fatah supporters and anti-Hamas activists to express their own opinions.

While Hamas supporters post beautiful photos of Gaza and statistics on the number of schools and road projects that were completed during the reign of Hamas, their opponents use the same hashtags to talk about the deteriorating situation in the Gaza Strip, such as the spread of unemployment and poverty and the destruction that took place under Hamas.

Yet the early campaign has stirred angry reactions among social media users as photos spread showing citizens carrying banners bearing the Arabic hashtag “Before&After” with a series of comments: “Our children were taught how to dance, but now they are learning how to use weapons” and “Our mosques have become more beautiful and filled with believers,” as well as “We no longer have discotheques, pubs and amusement centers like before.”

Community activist Bisan Shehadeh told Al-Monitor, “This campaign is backfiring. The banners give the impression that the society [in Gaza] was ethically corrupt and Hamas led it to the right religious path, although the society in Gaza is a historically conservative society.” Shehadeh stressed that the campaign insults the intelligence of the citizens of the Gaza Strip.

Hani Habib, a political writer for Al-Ayyam newspaper, told Al-Monitor, “The content of this kind of campaign launched by Hamas is good publicity for Fatah. Fatah supporters strongly replied to the photos posted by Hamas supporters and started comparing how Gaza was under Fatah and how it became under Hamas.”

About the anger stirred by the #Before&After campaign, Hamas spokesman Hazem Qasim said his movement has nothing to do with the early electoral campaign that is currently taking place, explaining that these hashtags were launched by groups of young enthusiasts.

Qasim told Al-Monitor, “This campaign cannot be considered an electoral campaign for Hamas, because the movement is committed to the Charter of Honor signed by the Palestinian factions with the Central Election Commission and that states that all factions shall abide by the time limit set by the law for the electoral campaigns. In case we decided to support a list of candidates, our campaign would be professional and would focus on the services that are specific to the municipality. These are not political elections.”

Yet Hamas-affiliated media outlets, such as Shehab News Agency, al-Resalah.net and Felesteen Online, openly supported these campaigns and hashtags; they even featured some of their posts on their own social media accounts. The campaign’s big banners that spread in the streets raise questions about the capabilities and influence of the youth groups behind these campaigns.

On another note, Habib and Shehadeh both pointed to the intensified electoral advertisement in favor of Hamas during sermons in mosques heard loudly on the streets, especially on Fridays, about the corruption of Fatah's rule and the positive achievements of Hamas’ rule.

Habib told Al-Monitor, “In 2006, Hamas was unable to gain the support of mosques like today, since it did not control mosques as it does now, and this is why it is now launching a religious advertisement campaign through mosques, while trying to focus on its military accomplishment and reconstruction achievements on social media.”

Qasim said, “Not every word or statement by a fan of Hamas can be deemed a position or a behavior by the movement itself. We decided not to use these religious platforms in our electoral campaign. We were committed to this in the 2006 legislative elections, and the [electoral] supervisory authorities can attest to that."

However, a report issued by the Palestinian Center for Human Rights in February 2006 tracked dozens of violations by Hamas and Fatah of Article 64 of the Elections Law No. 9 of 2005, which provides for abstaining from organizing electoral festivals and holding electoral meetings in mosques and churches.

The report stated that preachers at the mosques explicitly called to vote for Hamas’ Change and Reform list and its candidates in the constituencies during the electoral campaign in 2006. It also noted that Hamas organized a march to support the Change and Reform list, starting from two mosques in Gaza City, during which participants carried electoral banners and slogans. The report listed the names of the mosques and the types of violations.

A source close to Hamas told Al-Monitor on condition of anonymity that Hamas would not appoint an electoral campaign manager, because it will not run in the elections under its own name but rather by supporting lists of specific candidates.

“Hamas will choose and support lists that are the most capable of serving our people, away from political considerations, and will be campaigning for these lists,” Qasim said.

In the 2006 elections, Hamas worked on the ground, made direct contacts with the voters and provided great social services, which was reflected in the polls.

Yet things are different now. Hamas has been governing the Gaza strip for more than 10 years in light of an ongoing siege, lack of freedoms, repeated wars and a deteriorating economy to the point that the World Bank stated in a press release in May 2015, “Gaza economy on the verge of collapse.”

Eleven years after the latest elections and amid the deep polarization between Hamas and Fatah, will these electoral campaigns prove to be efficient and push voters to vote for Hamas again?