Hamas started on March 13 a social media campaign on Twitter with the hashtag #AskHamas to reach out to the Western public in a bid to move closer to talks with European countries. 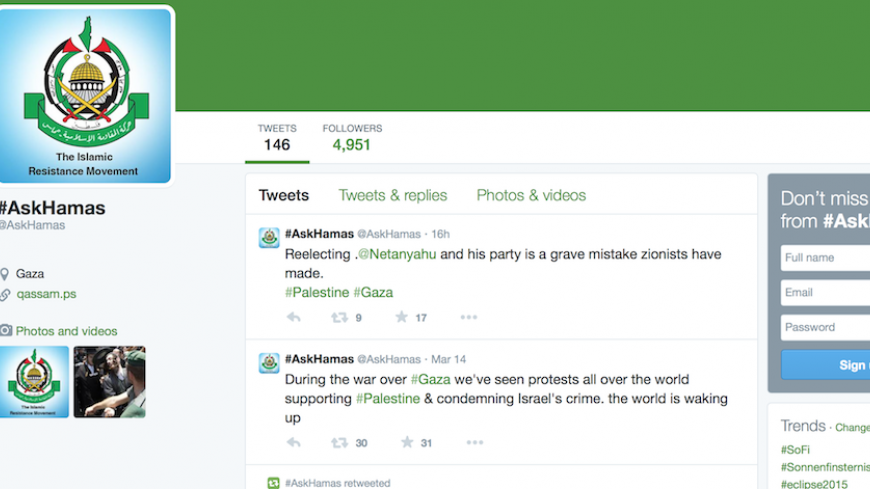 A screenshot of the #AskHamas Twitter campaign, taken on March 20, 2015. - Twitter/#AskHamas

Hamas took the unprecedented step on March 13 to address the Western public opinion in English on social media websites by using the hashtag #AskHamas. The campaign lasted for five days.

Hamas media adviser Taher al-Nunu told Al-Monitor, “The campaign was launched as the deadline to appeal the EU court ruling taking Hamas off its terror list approached [March 18]. The campaign targeted the Western public, with the objective of delivering messages expressing Hamas’ ideas, to the effect that Hamas is not a terrorist group but a national liberation movement, and that the Israeli occupation is the real terrorist.”

He added, “The media campaign has focused on social media [namely Twitter], in a question and answer format, to convey the truth to the largest segment in the Western street, which showed solidarity with the Palestinian people.”

Abu Ubaida, the spokesman of the Izz ad-Din al-Qassam Brigades, was expected to join the campaign. Yet, at the last minute, Hamas decided that Ubaida would not join the campaign, without giving a reason.

On March 15, Haniyeh answered within three hours questions asked by Twitter users. He said, “Hamas is a Palestinian resistance movement designed to liberate the land. Our struggle is limited to the occupation, and we do not oppose a just peace that guarantees our land and rights.”

Once the campaign had started, thousands of people participated by asking Hamas serious and sarcastic questions, and more specifically on the movement’s recent informal talks with European countries. Haniyeh responded that Hamas is indeed in contact with all peoples, including Westerners, without going into further details.

The campaign’s page included the following answers: “Hamas does not fight the Jews, but rather the Zionists"; "Women in Gaza enjoy equal rights"; "Hamas does not impede the elections"; and "Hamas wants peace. Israel wants war.”

Mushtaha, who has spent 25 years in Israeli jails, was asked an embarrassing question regarding his feeling after Hamas equated Gilad Shalit, the Israeli soldier who was abducted in June 2006, with 1,027 Palestinian prisoners, who were released in the prisoner swap deal in October 2011. He replied, “When we captured Shalit, we took the whole Israeli army, which is the world's fourth most powerful army, hostage.”

The answers to questions by Huda Naim, a prominent female Hamas leader, focused on the status of women in Hamas.

Mousa Abu Marzouk, the deputy chairman of Hamas’ political bureau, said on March 16, “In terms of its ties with the West, the movement is now raising its voice to the West while in the past stories were being told about it. The West's interaction with #AskHamas is proof that it is interested in knowing the identity of the movement, which undermines the Zionist narrative.”

Yet, Khaled Safi, a social media activist who won the 2012 prize for best Arabic blog in the Deutsche Welle competition, told Al-Monitor, “As soon as the campaign started in the evening of March 13, international news sites started monitoring the tweets, which were then retweeted. This has given the campaign better publicity. The campaign’s hashtag has been the most used internationally, since the campaign is international rather than local.”

He added, “The number of tweets reached 76,000 in the early hours, and [the campaign’s] followers exceeded 4.2 million. 65% of the tweets were by men and 35% by women, and 49% of the tweets came from America, followed by Britain, Turkey, Iran, France, South Africa, Australia and Palestine. The campaign’s name was mentioned in 150 newspapers and websites.”

Despite a considerable effort made by Hamas' media wing, it was clear that the main weakness of the campaign was related to a lack of English speakers in Hamas to answer questions. Moreover, the campaign’s name, “Ask Hamas,” came in the form of a question, rather than indicating that information would be provided, and the question in the form of a hashtag could easily backfire.

Al-Monitor compiled a random sample of 300 tweets posted within a few minutes of the start of the campaign, and found that only 26 supported Hamas, while 274 were against it, including 156 that mocked the movement.

The “Ask Hamas” campaign was a hot topic on social networking sites among supporters and opponents, according to a referendum published by Ihab al-Ghussein, head of the consensus government media office in Gaza.

Ghussein told Al-Monitor, “Hamas leaders who participated in the campaign were subjected to provocative questions, such as accusations that they used civilians as [human] shields or that Hamas’ charter called for killing the Jews in the world. However, our answers were clear and backfired against the expectations of Twitter users close to Israel.”

Websites affiliated with Fatah said that Hamas was ignoring the suffering of Gazans and preferred to address the foreign public to improve its image.

Despite Hamas celebrating what it described as a great campaign success, some in the movement believe the campaign came too late. Clearly, the Hamas movement, 27 years after its creation, is unable to enlist individuals fluent in foreign languages and who know how to address those in the West.

In fact, the campaign was a reaction to media campaigns attacking Hamas — it was not part of a specific plan.

It should also be noted that a review by Al-Monitor of tweets marked #AskHamas revealed a large number of anti-Hamas tweeters, mainly because Israel and its supporters sent out requests for as many tweets as possible that insulted or mocked Hamas.

Finally, the launch of this media campaign coincided with an increasing number of leaks in regard to informal talks between Hamas and some European capitals. Hamas wants to move this dialogue from behind closed doors into the public space, by elaborating on the nature of the movement and marketing its political positions to influence the Western public opinion.

The success that Hamas hopes for following its recent media campaign targeted at Westerners will in the end collide with questions asked by Western policymakers. Hamas is well aware that sensitive questions will not be answered on Facebook and Twitter, but rather through direct political talks between Hamas and the West — which it seems have yet to materialize.