In the Gaza Strip, where the last local council elections were held in 2005, political parties are launching their campaigns a little early. 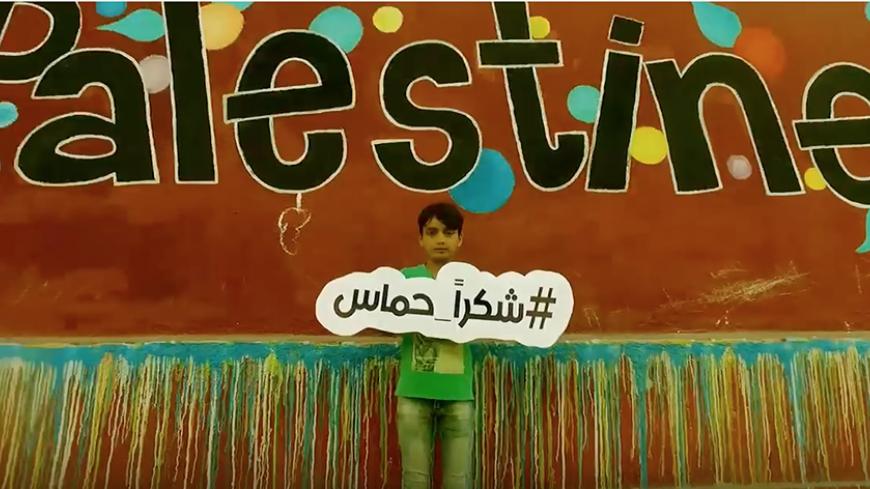 A still from a Hamas campaign video called "Thanks Hamas." Films like this, most notably championing either Hamas or Fatah, started appearing on the internet in August in violation of Palestinian local electoral laws, Gaza Strip, Aug. 4, 2016. - YouTube/Ali Mohammed

GAZA CITY, Gaza Strip — In some countries where electioneering can be a yearslong marathon, it might seem odd that not only are local Palestinian political candidates limited to two weeks of campaigning, they are being called out for jumping the gun.

Promotions began appearing in early August, mainly on social media outlets. Supporters of the political parties — especially the two largest, Hamas and Fatah — have been exchanging accusations and slander in what is considered a flagrant violation of the Palestinian Local Elections Law of 2005.

According to the law, electoral campaigns may only start two weeks prior to the designated polling day. The law also bans speeches, pamphlets and advertisements containing attempts to defame other candidates.

Hamas spokesman Abdullatif al-Kanou’ told Al-Monitor, “We are now working to establish a central committee within our party to manage the electoral campaign.” Kanou’ denied that Hamas had already launched an official campaign, despite some members and supporters taking part in one, especially through videos and posters that highlight the accomplishments of the municipalities run by Hamas. The supporters also have organized social media campaigns under the hashtags #Ready and #Before&After.

Kanou’ said his party is keen to comply with Palestinian electoral law. He declined to comment on questions about Hamas' campaign funding sources.

In turn, Fatah spokesman in Gaza Fayez Abu Atiyeh told Al-Monitor his party has formed a central campaign management committee, with regional subcommittees in provinces and villages to inform Palestinian voters about Fatah’s candidates and election platform. Abu Atiyeh said any campaigning that might be underway is the work of individuals and supporters, not the party.

He also said Fatah possesses the necessary resources to fund its campaigns for its candidates and is committed to following the rules.

Anis Abu Sbaa, the head of the political parties and candidates section at the Palestinian Central Elections Commission, told Al-Monitor that the current campaigning is illegal. The commission has already drafted official correspondence addressed to the pertinent candidates and the parties' general secretaries, urging them to comply with the set dates. Abu Sbaa said he hopes the response will be positive.

He cited Central Elections Commission regulations mandating that parties cannot use public donations to fund campaigns or accept foreign financing. He also noted that the Local Elections Law calls for avoiding slander and defamation of candidates and refraining from using public and private properties as well as places of worship during campaigns.

Regarding campaign finances, Abu Sbaa said the Central Elections Commission demands that candidate lists each present a statement certified by an official auditor outlining where their money comes from and what it is spent on. Any party violating the order is subject to prosecution, he added.

Mohsen Abu Ramadan, a political analyst and former chairman of the Palestinian NGO Network in Gaza, argued that early electoral campaigns in the Gaza Strip are being fueled by the absence of the democratic process for the past 10 years.

“The last [legislative] elections were held in 2006, after the local council elections in 2005. The intensified political rivalry between Fatah and Hamas is another reason for the early campaigns,” he told Al-Monitor.

He said that each Palestinian party is trying — via a political campaign on its own website and social media page — to portray itself as the party most committed to human rights, freedoms and development, thus highlighting the flaws of other parties.

With regard to campaign financing, Abu Ramadan noted that large organizations such as Fatah and Hamas have their own financial resources to manage and fund their campaigns, while candidates in smaller parties lack financial resources.

Media studies professor Majed Turban at Gaza’s Al-Aqsa University attributed the absence of democratic values and tolerance to the Palestinian internal conflict. “This is why we are witnessing a cheap and improper use of campaigning tools, especially on social media,” he said.

In an interview with Al-Monitor, Turban argued that the current campaigns, mainly on social media and some websites, are not being carried out individually or randomly, but are organized and backed by well-known parties in Palestine. Many of the hashtags posted in the past few days had considerable impact and were widely shared, he said, asserting that such success requires an organized effort.

However, the situation is expected to escalate as the day approaches for legally launching campaigns, with more frequent and varied use of campaigning tools in the media.