More than 300,000 Palestinians in Gaza have registered for the upcoming elections, a sign that Gazans are desperate for an end to the political paralysis, writes Mohammed Suliman. 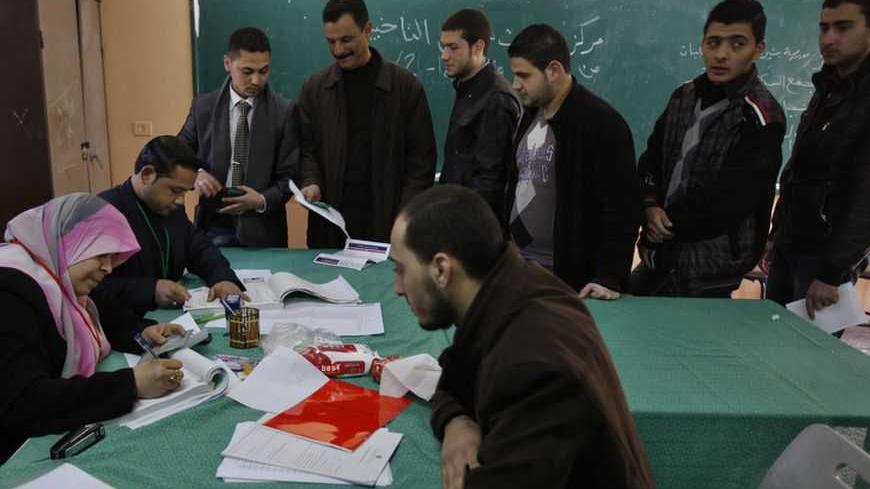 Following several meetings held in Cairo in order to advance the reconciliation efforts between Palestinian rivals Hamas and Fatah, the process of updating the electoral rolls kicked off on Monday, Feb. 12, in both Gaza and the West Bank.

While the registration voter records have been consistently updated on an annual basis in the Palestinian Authority-controlled West Bank, it was the first time since 2007, the year when the Islamist party Hamas seized control of the Gaza Strip, that the Central Election Commission (CEC) operated in Gaza.

The voter registration update, many believe, including PA president Mahmoud Abbas, is a “critical precursor” that Palestinians are edging closer towards unity. They’re inclined to believe the opportunity has finally come their way whereby this step will be followed by more positive steps to further reconciliation, which will finally bring about an end to their frustrations.

Others, however, and despite their participation in the voter registration, feel that this is going to be utterly pointless due to their lack of faith in any local Palestinian leadership.

Impatiently standing in the queue at a registration center in Khan Yunis, Mohammed Abu Elba, 25, and resident of Khan Yunis City, told Al-Monitor that he had come in order to practice his right, which he hopes could contribute to changing the situation on the ground so that he and desperate young people of his age may finally have a better life in the Gaza Strip.

Young people, Abu Elba believes, are going to be the most targeted group in any forthcoming election by political parties which have all lost credibility in his eyes. In a clearly irritated tone, he said that there are no political parties or leaders here equipped with a vision and “sufficient imagination” and who are capable of changing the miserable status quo of the youth in Gaza.

“At this stage, I stopped looking at the political situation,” the industrial engineering graduate said despondently. “I have other priorities. I am a recent graduate, and I want to have a job and a stable income. I will vote for whoever can help me and the young people in Gaza to achieve their goal. All we aim for is to have a decent life where we can live as normal human beings. I want to realize my potential, to be a productive person. … I simply don’t want to feel I am a burden on my family and the society at large.”

On the other hand, Amira al-Ajramim, a registran at the registration center at Jabaliya refugees school, said that what drove her to participate is her belief in the “utmost need” to end the internal political schism.

“I prefer political unity to living divided and in a complete state of chaos … and I am happy to have my voiced registered because I would like to choose who I believe can best represent me as a woman. Women will have a big role in deciding the shape of the next government. Finally, I hope this will be just the beginning of ending the division as well as the people’s suffering,” she said.

However, the performance of the CEC’s staff in Gaza was heavily criticized by the Euro-Mid Observer for Human Rights as being characterized by “severe delays and confusion.” It added that the CEC members at the several registration centers were not ready and trained enough, which slowed updating the electoral roll and resulted in frequent complaints by registrants.

Speaking to Al-Monitor, Salem Sabbah, a 50-year-old resident in Gaza City, said that this was the second time his family went to the same registration center to register his name, his wife and his three daughters. Highlighting several weaknesses of the CEC’s staff, Sabbah said that he had to go to different schools serving as registration centers only to leave them because they were overcrowded, lacking a sufficient number of registration officials, slowing the process.

Sabbah explained to us the reasons why he and many others like him were so adamant on registering his family. This, he said, was the only way people could practice their right at a time when many became more aware of their rights and the significance of their votes in deciding the shape of their future. “At this time, what are needed are actions rather than words, so that everyone can contribute to making the desired change the people long for,” he said.

The voter registration update is scheduled to end today after a two-day extension. A high turnout, according to the CEC, has marked the voter registration process throughout. This, if anything, highlights the people’s craving for bringing about change to the current stalled and dismal state of affairs at all levels — economic, social and political.

The question that arises, in the words of one registrant, is whether this is truly the beginning of the process of reconciliation leading to a unity government and elections, or a slice of false hope as talks between Hamas and Fatah seemed, as habitually, to have reached another dead-end.