The reconciliation government has yet to hold the presidential and parliamentary elections in the Gaza Strip and the West Bank, as Hamas and Fatah accuse each other of stalling this democratic process. 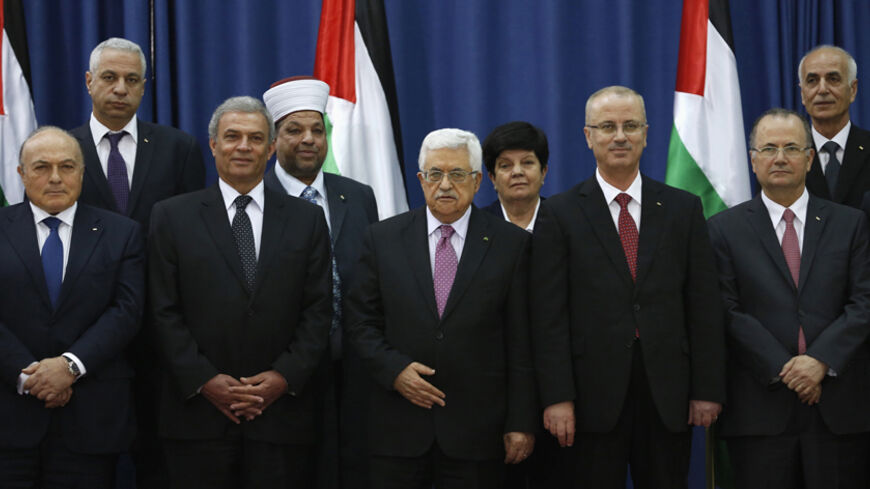 RAMALLAH, West Bank — It has been five months since the formation of the national unity government, which has yet to achieve its most important task: preparing for the presidential and legislative elections.

There are indicators according to which the ballot boxes will remain closed until further notice, as politicians and observers say that no elections will be held anytime soon.

Al-Monitor learned that Azzam al-Ahmad, head of the Fatah reconciliation delegation, will visit the Gaza Strip soon, to meet with Hamas leaders and discuss various issues, including the elections.

Hamas leader Mahmoud al-Zahar told Al-Monitor, “The elections are not on the table now, nor will they be any time soon.”

According to Zahar, the reason behind this delay is Fatah, and he accused the government of being helpless and not doing any of the tasks it was entrusted with. “Hamas is ready to contest the elections under any circumstances and at any time,” he said.

For his part, member of Fatah's Central Committee Mahmoud al-Aloul said in an interview with Al-Monitor that he will discuss a new date for the elections and agree on the details with Hamas. Aloul expressed his willingness to contest the elections and reject any accusation that his movement is disrupting them.

Meanwhile, the director general of the Palestinian Center for Policy Research and Strategic Studies-Masarat, Hani Masri, told Al-Monitor that holding elections is difficult, as tension is rising with the occupation due to the failure of the negotiations.

Following this failure, the Palestinian Authority (PA) is getting ready to submit a draft resolution to the UN Security Council for the Palestinian state to be recognized and determine the time frame for ending the occupation and for Palestine to become party to international treaties.

The vice president of the Legislative Council, Hassan Khreisheh, believes that “talk about the elections is detested,” and said in an interview with Al-Monitor, “None of the political parties seem to be talking about the elections; everyone is comfortable with the current situation, and reconciliation has yet to reach its goals."

Member of parliament Khalida Jarrar agreed with Khreisheh and told Al-Monitor that “elections seem to be elusive” because the outstanding issues are not being addressed responsibly, and there is no political will on either side to do so.

The holding of the elections requires a presidential decree three months before the set date, so that the Central Elections Commission (CEC) can prepare for them.

Hisham Kahil, executive director of the CEC, told Al-Monitor that the commission is ready to implement any presidential decree issued in this regard, provided that such decree states the law according to which the elections will be held.

In March, the CEC updated the electoral register in the West Bank and the Gaza Strip, and the number of registered people totals 2 million Palestinians.

The elections are not being held for several reasons, including the failure of the negotiations, the pending reconciliation issues that are yet to be solved and the internal situation of both Fatah and Hamas.

Aloul said, “The recent aggression on Gaza has disrupted the preparations for the elections,” as it came a few days after the formation of the government, but President Abbas insists on the [elections taking place]."

Hamas accused Fatah of rejecting the holding of the elections as a result of not being ready and for dreading Hamas’ rising popularity due to the resistance’s victory in Gaza. Zahar said, “Our data shows that Fatah does not want the elections because there is a large popular movement with the resistance and Hamas.”

He added, “Fatah refuses to hold elections due to the failure of its political project, the victory of the resistance option and the division of the movement in the Gaza Strip between [Mohammed] Dahlan and Abu Mazen [Abbas].”

However, Khreisheh accused the two movements of not being serious in tackling the elections, and said, “Each of the two parties has reasons impeding them from giving citizens the right to go to the ballot box by coming up with several excuses.”

“Each party wants to hold the elections at the time they deem fit, depending on their popularity and the results of opinion polls,” he added.

The Palestinian legislative institution is living in a state of complete paralysis due to the disruption of the Legislative Council since the split in 2007.

According to Jarrar, Palestinians need to elect a national council. She said that the PLO leadership ought to hold a meeting to pave the way for an end to the split and agree on an integrated program, including the democratic issue.

According to Masri, neither Fatah nor Hamas are ready because Hamas believes that even if it wins the elections, it will not be able to rule and it will be besieged; while Abbas wants the elections to be held under Fatah’s unity, which is not guaranteed in light of the conflict on the candidacy and the dispute with Dahlan.

In the meantime, the occupation’s disruption of any election cannot be overshadowed, especially if Hamas decides to participate. The occupation can disrupt any elections by banning it in occupied Jerusalem or by arresting candidates, as happened with previous elections.

According to the electoral law, every Jerusalemite citizen carrying a blue identity card is automatically registered in the voters’ register and treated based on special considerations on election day.

Concerning the leaked statements about Fatah’s new initiative to form a unified list to contest the elections, Zahar said, “All of the suggestions fall under the category of future proposals. There is no talk about the elections for now.”

“The political analysis of some Hamas leaders does not mean that we will forge an alliance with Abu Mazen or Dahlan. Hamas will not be allied with the resistance program,” he added.

Khreisheh said that mentioning the possibility of announcing one list between the two movements is a sort of pointless effort aimed at eliminating democracy in Palestine.

Based on past experience, it looks like the ballot boxes in Palestine will remain closed until further notice in light of the rigidity of the political process and the absence of international pressure on Israel, which makes the final call in allowing the holding of the elections.

It should be noted that since the establishment of the PA, elections have been rare: first, in 1996 to give legitimacy to the Oslo Accord, and the second in 2005 (presidential elections) and in 2006 (Palestinian Legislative Council elections), after the departure of President Yasser Arafat (who died in 2004), the subsequent end of the intifada, the resumption of the peace process and Hamas’ joining into political life based on the Oslo Accord.