As the Palestinian Authority awaits Israel's decision on holding elections in Jerusalem, Hamas is demanding action with or without Israel's permission. 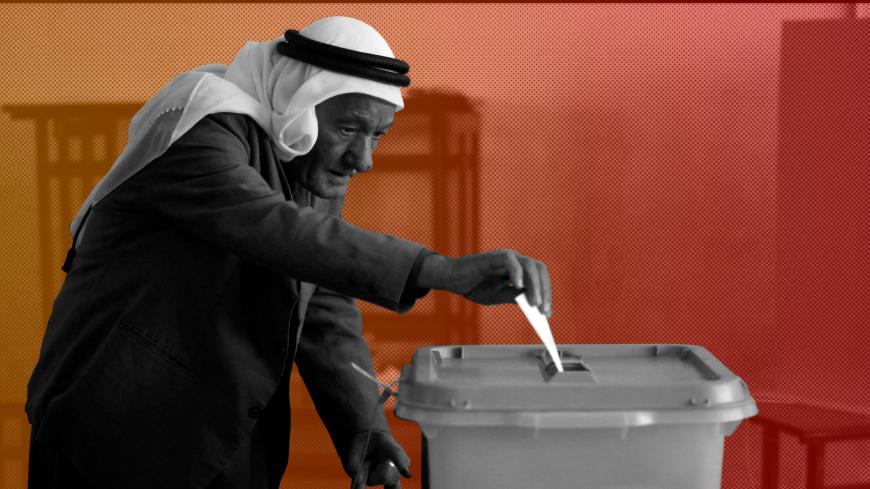 A Palestinian man casts his ballot for municipal elections at a polling station in the West Bank village of Shiyoukh, north of Hebron, Oct. 20, 2012. - REUTERS/Ammar Awad

Abbas has yet to issue a decree to schedule the vote, as he waits for an official response from the Israeli side on his request to allow polling stations in occupied East Jerusalem. Since he first announced in September his decision to hold presidential and parliamentary elections, Abbas has said the electoral process should include all Palestinian territories, including the West Bank, East Jerusalem and the Gaza Strip.

“No elections will be held without Jerusalem,” Abbas reiterated during a Dec. 17 speech at a Fatah Central Committee meeting.

“We will turn the issue of the elections and Jerusalem into a political and popular conflict with Israel,” Bardaweel said during a news conference in Gaza City.

The prospect of Israel approving a vote remains far-fetched, given that the official Palestinian presence in the city is regularly undermined. This is especially true since the official Palestinian TV station was closed Nov. 20. Its staff members are being prosecuted or imprisoned on charges of carrying out PA activities in Israel without a permit.

However, Abbas is seeking international support to pressure Israel into allowing the elections.

"We have informed all friends, especially the EU, to speak with Israel to this effect," he said during the meeting. He didn't say whether he had received any responses.

Palestinian government spokesman Ibrahim Melhem told Al-Monitor, “There are no alternatives [to] holding elections in Jerusalem, as this is a matter of Palestinian sovereignty over the city. The PA, however, is conducting diplomatic efforts to pressure Israel to give its approval to this effect.”

Shtayyeh said he recently held meetings with the UN and international bodies, and some EU members are already exerting pressure on Israel.

The EU stance on the PA’s request is conditional on setting a schedule for the vote. Shadi Othman, EU spokesman in Jerusalem, told Al-Monitor, “When a decree is issued on the timeframe of the elections, the EU countries are ready to communicate with the relevant stakeholders.”

East Jerusalem was part of the last parliamentary ballot, in 2006, and resulted in a surprise win by Hamas. The technical procedures of the electoral process in the city are special. According to the 1995 Taba Agreement (Oslo II) between Palestinians and Israel, polling stations are to be set up in Israeli postal centers and Israel has to deliver the closed ballot boxes to the PA for screening.

Palestinian Central Elections Commission (CEC) spokesman Farid Tohme told Al-Monitor, “There are only seven post offices in East Jerusalem, which can only accommodate 5,500 voters.” According to the CEC, Jerusalem has 75,401 eligible Palestinian voters.

Tohme said Palestinians of East Jerusalem can cast their ballots in the 16 polling centers in the city’s outskirts that are annexed to the Jerusalem district.

“Only Jerusalemites who hold a Jerusalem identity and are of voting age can go to the ballot boxes," Tohme said.

Khalil Shaheen, director of research and policies at the Palestine Center for Policy Research and Strategic Studies (MASARAT), believes that waiting for Israel’s approval on a Palestinian request shows that relations between the two sides are continuing within the framework of the Oslo Accord, but the status quo needs to change.

He told Al-Monitor, “The elections need to be part of the struggle against the occupation and its measures, particularly when it comes to countering Israel’s annexation measures.”

Shaheen indicated that all election endeavors by the PA, EU countries and UN institutions will be useless unless Israel feels it has something to lose — or something to gain.

“Israel might not give its approval in the beginning, but is likely to agree to holding the elections at a later stage under its own terms,” he noted.

If Palestinians in Jerusalem grow closer to the PA, they might be less worried about annexation, he believes.

“Israel wants Jerusalem’s land and not its inhabitants. Israel believes that the elections would strengthen the association of Jerusalemites with the PA and not the land, which would make it easier for the Israelis to annex the lands without having to worry about the people,” Shaheen said.

He believes that the biggest challenge if elections are held in the city is to have a fair vote without any interference from Israel, which had previously banned electoral campaigns, arrested candidates and withheld IDs from Jerusalemite candidates and voters.