Fatah and Hamas keep accusing each other of hindering the election process while expressing their willingness to work together. 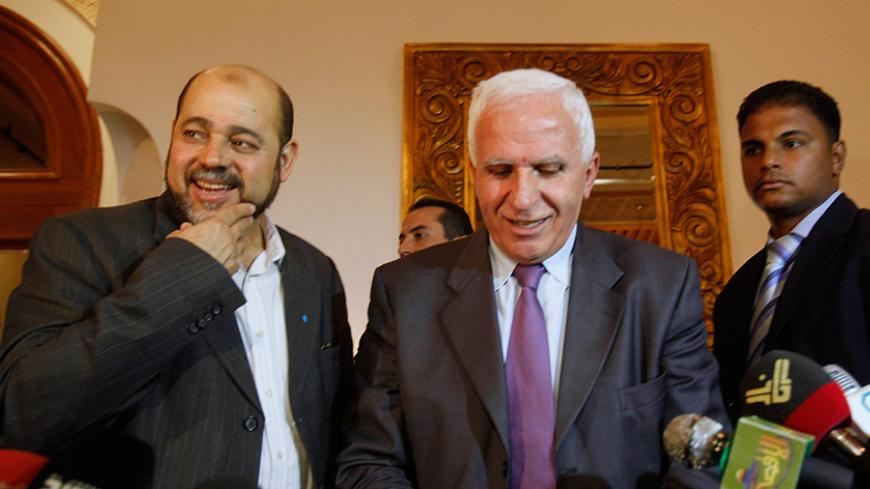 RAMALLAH, West Bank — The Ramallah-based Central Elections Commission will launch an electronic registration process in February to update the annual register of voters, though there is no hope of holding presidential and legislative elections any time soon in Palestine.

On Jan. 8, Mousa Abu Marzouk, a member of Hamas’ political bureau, announced the “movement’s willingness to go through the presidential and legislative elections and the elections of the Palestine Liberation Organization’s National Council as soon as possible,” placing the ball in President Mahmoud Abbas’ court. It's an approach to show that Hamas is not the one disrupting the elections and that Abbas should first issue a presidential decree to hold the elections.

After the national consensus government formed under the Beach Refugee Camp Agreement was sworn in before the president in Ramallah on June 2, 2014, Abbas instructed the Central Elections Commission to begin preparation for the presidential and legislative elections six months later on Dec. 2. However, several obstacles prevented the government from making the preparations.

Azzam al-Ahmad, Fatah leader and official in charge of the reconciliation talks with Hamas, told Al-Monitor, “No date was specified for the elections and there is no need to talk about it now. When Hamas shows its commitment to the reconciliation agreements, only then will we discuss everything else. We can only talk about elections after Hamas allows the national consensus government to exercise its authority in the Gaza Strip, which the movement controls.”

On Dec. 30, Abbas called for the formation of a government of national unity — a government formed by members of different factions, unlike the national consensus government that was formed by independent parties as per the Beach Refugee Camp Agreement.

But Jan. 6, on the occasion of the Eastern Church Christmas celebration at the presidential palace in Bethlehem, Abbas said in a speech addressing Hamas, “If you want a government, we agree to form it with you and all other factions, and you know the price we will pay for it, but we will go immediately for the elections.”

Ahmad said, “This is not the first time the president has called for a national unity government and elections. I have repeated this call to Abu Marzouk and invited him to either allow the consensus government to exercise its functions in Gaza, or to form a government of national unity whose members would be from all Palestinian factions, including Hamas, Fatah and all other factions, and which would be responsible for Gaza and the West Bank and prepare for elections. But Hamas did not agree.”

In an interview with Al-Monitor, the secretary-general of the Fatah Revolutionary Council, Amin Maqboul, said that Abu Marzouk’s announcement of his movement’s readiness to hold elections was “not serious.”

Maqboul added, “If Hamas were honest, it would have taken the first required steps to hold elections, like forming a national unity government or enabling the reconciliation government’s action in Gaza. Hamas is not serious and does not want to hold elections.”

Jamil Mezher, a member of the Popular Front for the Liberation of Palestine’s political bureau, told Al-Monitor that the calls made by both movements are “part of the bickering and taking stances against one another, as holding elections requires certain steps such as agreeing on a national strategy in the framework of a comprehensive policy review, a reform within the PLO in order to rebuild it and the formation of a unity government to pave the way for the elections.”

He added, “Holding the elections needs a real political will and a decision to end the division first. Thus talking about elections before any of that happens is a sort of deception.”

The director-general of the Palestinian Center for Policy Research and Strategic Studies, writer Hani al-Masri, shares Mezher’s point of view. He told Al-Monitor, “Neither Hamas, Fatah nor President Abbas are serious about holding the elections. Every time a party mentions this, it is only a matter of bickering and maneuvering, nothing more.”

The last presidential elections were held in 2005, when Abbas won. However, Fatah lost to Hamas in the last parliamentary elections held in 2006, with Hamas securing 76 out of 132 seats in a surprise victory.

“Fatah is not ready for the elections, and Hamas does not want the elections because it is afraid it would not score as high as in the previous election, or because it fears it would not be allowed to govern if it wins, so the two movements are in a disagreement, that is all,” Masri added.

When asked which party is the decision-maker when it comes to the elections, Masri said, “The decision to hold the elections is not a Palestinian decision; it is an Israeli-Arab-US-international decision. Israel will only agree to hold elections if they will result in a political program based on the Oslo Accord, while the Arab states and the international community do not want any elections in which President Abbas — whose popularity has recently decreased — could lose.”

The results of a poll conducted by the Arab World for Research and Development published on Nov. 5, 2015, showed that 83% of Palestinians support holding legislative and presidential elections. Meanwhile, Abbas’ popularity went down, as the poll showed that only 32% would vote for him. Another poll the same group conducted on July 27, 2015, had shown that 38% would have voted for Abbas.

Another poll conducted by the Palestinian Center for Policy and Survey Research on Dec. 14, 2015, indicated that 65% want Abbas to resign, in the belief that he would lose against Hamas’ candidate if elections were held.

To hold elections, a presidential decree needs to be issued three months before the scheduled date, so that the Central Elections Commission can begin its preparations.

On the reason that prevents Abbas from issuing a decree to hold elections, and whether it is linked to his low popularity or because Fatah did not hold its seventh conference, Maqboul said that Abbas did issue one in 2014 after the consensus government was formed. But the obstacles Hamas put before the government prevented the preparations, and therefore “issuing decrees without applying them is undesirable.”

“Fatah is preparing to hold elections as soon as they are rescheduled and it trusts its popularity and followers,” Maqboul said. “Fatah insists that President Abbas would be its candidate for any upcoming elections. However, should he insist on not running, the movement’s institutions would do their research and find a proper solution.”

So far, no other potential names are lined up.

Meanwhile, Masri believes that “some figures in the Palestinian Authority want the situation to remain as it is and thus they do not want to hold elections, as they cling to the positions they acquired as a result of the division. In addition, Fatah lacks unity and a clear mechanism to transfer the leadership of the movement, the PA and the PLO, should President Abbas really decide that he will not run for any of these positions.”

So long as a government of national unity — which many see as a first step toward holding the elections — is not formed, the ballot box will remain out of the Palestinians’ reach.